It’s no surprise that Facebook is an advertising juggernaut bringing in billions of dollars in revenue. To keep things interesting for brands and users, the company has been developing new marketing formats, such as its dynamic product ads, which allow advertisers to better promote their products. With more than 2.5 billion items uploaded to the social network in just the past three months, Facebook has made some updates, such as adding travel to the mix and extending the ad type to Instagram.

Since its launch earlier this year, the dynamic ads feature has only focused on retail and ecommerce verticals. However, Facebook thinks there’s an unmet need in the travel space, especially on mobile, and the company would like to help advertisers reach individuals planning or booking trips on their mobile device. Whether people are searching for accommodations or flights, dynamic ads could help businesses reach them at the crucial moment. So starting today, companies can target customers based on location and travel dates.

After seeing significant adoption of dynamic ads, Facebook feels the time is right to bring them to its popular photo-sharing app. The company claimed that this ad type will enable brands to “showcase every one of their products automatically, with dynamic creative and targeting” that’s aimed at showing the right product to the right person. 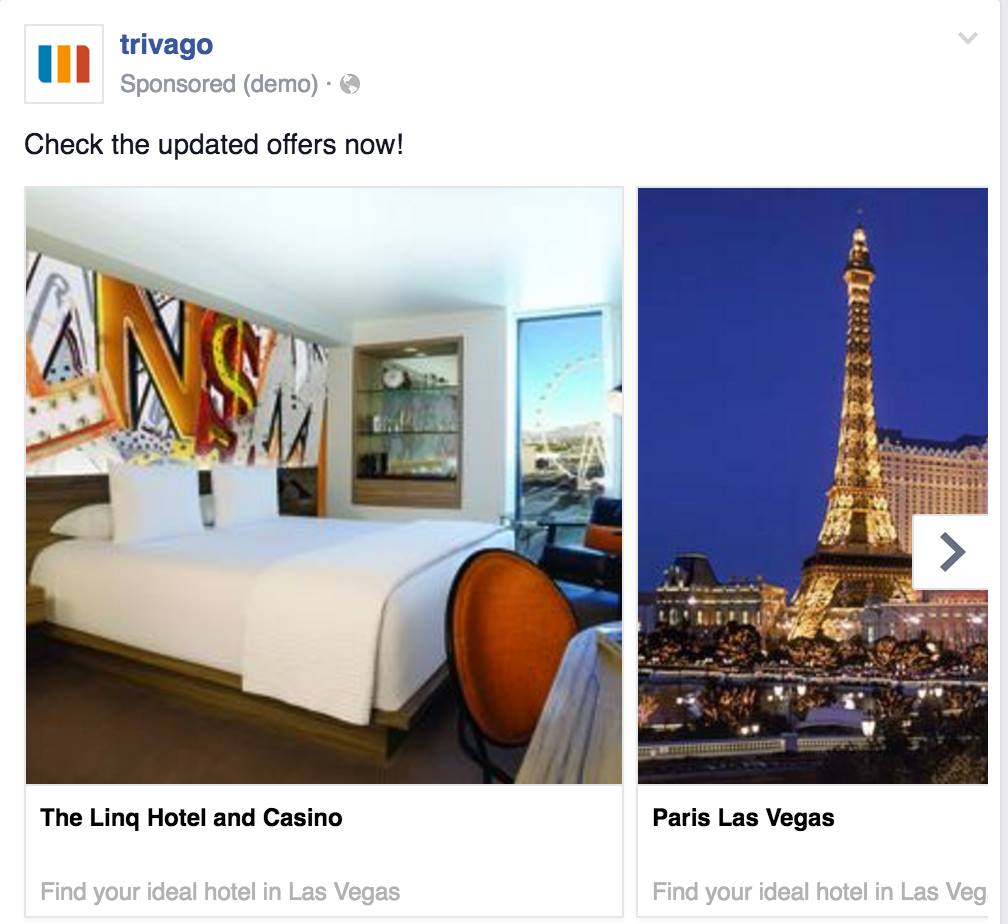 It’s predicted that Instagram ad sales will be more than $2 billion by 2017, and, although Facebook hasn’t broken out how much revenue it’s received through the photo-sharing app, there’s definitely a huge opportunity. Chief operating officer Sheryl Sandberg has said that more ads were coming to Instagram, but that rather than inserting them willy-nilly, the company would take its time to ensure that the overall user experience is maintained, or even improved.

There are more than 200,000 advertisers on the service, which is indicative of Instagram’s enormous money-making potential, especially considering the platform’s user base of more than 400 million users.

While dynamic ads are available on Instagram, the travel vertical isn’t currently included — though that’s expected to be added in the coming weeks.

In other ad news, Facebook has begun rolling out what it calls “advanced rules” for its Custom Audiences offering. This enables marketers to segment their audiences and advertise accordingly. You’re now able to establish rules based on engagement frequency, which includes how often a user performs a specific action, like visiting a page; time spent, or how much time it takes to do that behavior; dynamic date, which is a date range during which the person has shown an interest in something; aggregated value, which is the total amount spent; and which device is being used, including Android, iOS, desktop, and other mobile devices.

Previously, Facebook only allowed you to target people based on whether they visited a site or app, but it was near impossible to get a more granular understanding of their behavior. These new rules are intended to provide advertisers with the right opportunities to maximize their conversions.

All of these updates are rolling out today.

Updated on 3:03 p.m. Pacific on Tuesday: The headline has been updated to clarify that 2.5 billion items were uploaded but not all were seen by users. Facebook said that 440 million people have seen a dynamic ad in the last three months.