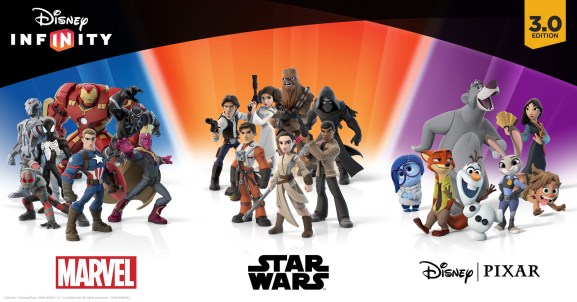 The three pillars of the now-defunct Disney Infinity.

Disney is hitting the ejector-seat button on its interactive-gaming-toy business.

The company told investors today that it is ending its Disney Infinity gaming franchise. This gaming series enabled players to buy physical toys that they could bring into their video games, and it’s largely based on the toys-to-life model that the successful Activision series Skylanders launched in 2011. But Infinity is not performing well, and Disney credits it with dragging down its consumer products and interactive media division. While the global gaming market is $99.6 billion, a big slice is on mobile, where Disney has shifted a lot of its focus.

Disney confirmed that it will still release the Infinity character playsets for the films Alice Through the Looking Glass and Finding Dory. The studio was also working on sets for Star Wars: Rogue One, but that is no longer going to happen.

GamesBeat reached out to Disney for a statement, and it provided us with the following:

“After a thorough evaluation, we have modified our approach to console gaming and will transition exclusively to a licensing model. This shift in strategy means we will cease production of Disney Infinity, where the lack of growth in the toys-to-life market, coupled with high development costs, has created a challenging business model. This means that we will be shutting down Avalanche, our internal studio that developed the game. This was a difficult decision that we did not take lightly given the quality of Disney Infinity and its many passionate fans.”

This confirms that the company is ending its internal game-making endeavors. Instead, Disney will now move on to licensing its properties out to third-parties. This is a business model it has had success with when it comes to Star Wars and Marvel — although it is in contrast to how it approaches its films business where Marvel has worked to get back the rights to characters it has licensed out to Sony and Fox.

But clearly, Disney doesn’t want to deal directly with making games any longer. That’s because it’s expensive, and the interactive-toy market is overly saturated. Disney chief executive officer Bob Iger noted during an investors’ call today that it knew that the toys-to-life market was risky and that the risk had caught up with them. He said that Disney no longer has confidence in the business.

Disney’s toy and gaming division saw a 2 percent decrease in revenues down to $1.2 billion. It also took an 8-percent hit to its operating income, which was down to $357 million.

“Lower operating income was primarily due to the impact of foreign currency translation due to the strengthening of the U.S. dollar against major currencies, lower operating margins and comparable store sales at our retail business, and lower results for [Disney] Infinity,” reads the company’s quarterly report. “These decreases were partially offset by higher licensing revenues.”

While Disney is retreating from publishing console games, you can likely expect to see even more mobile games featuring the company’s characters. Developers and publishers on iOS and Android are always looking for an attractive property to help their free-to-play businesses find players,