Revlo has raised a $1.1 million seed round to make it easier for livestreamers to interact with and monetize their fans.

The Toronto, Canada-based company makes it easy for livestreamers, such as Twitch broadcasters, to interact personally with their fans. Revlo issues a free virtual currency that fans can earn by interacting with each other and making the community better. Fans can then spend that currency for things like personal invites to the next game or playing a favorite song during a livestreaming session. They can also use the virtual currency to make a wager on what the broadcaster will do next.

The funding comes from the YCombinator incubator, Extreme Ventures, and Monstercat. Justin Kan, founder of Justin.tv (now Twitch, which was acquired by Amazon for $970 million), will mentor the Revlo team. In Revlo’s view, if you make fans happy, you’ll make the broadcasters and their sponsors a lot of money as well.

Revlo is in beta testing now, but it was already tapped by ESL to host its Extreme Masters Gaming Championships and by music label Monstercat to host broadcasters in music.

The chief executive is James Sun. He started it with Julie Topp and Adam Hueniken in May 2015.

Revlo calls its business a “fan engagement platform on Twitch.” It allows broadcasters to create fan interactions on a scale of one or in the millions. While in beta, Revlo has already helped 15,000 broadcasters interact with an audience of more than 5 million unique viewers per month. 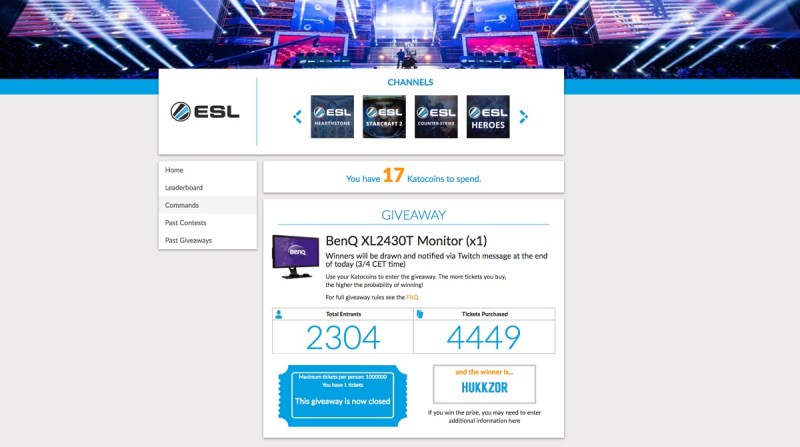 Above: Revlo gives out virtual coins to a livestreamer’s fans.

“Viewer engagement is what makes Twitch Twitch,” said Kan, partner at Y Combinator, in a statement. “Revlo is the best tool out there helping broadcasters engage with viewers, which is why we were excited to fund them!”

Revlo created its platform to make livestreaming more fun and personal for any fan.

“It’s really hard to create meaningful one-on-one interactions for thousands of people when you are only one person,” said Sun, in a statement. “As a lifelong gamer, I wanted to help broadcasters create fun, personal experiences for their loyal fan base. Happy fans spend more time and money in their favorite communities — helping the streamer and ultimately, growing the industry.”

No real money is required. Instead, the Revlo platform helps streamers and their moderators instantly reward viewers for engagement and interactions ranging from time spent watching the channel to actively participating in fun contests and games unique to each community. Fans can spend their earned currency for experiences like a personal invitation to join the next viewer game, a simple bet on what the broadcaster might do next, or even a request that the streamer play (or sing!) the fan’s favorite song during the broadcast.

“By implementing Revlo on UFC fighter, Rampage Jackson’s stream, we saw a 45 percent lift in view length, along with a 35 percent increase in the chat activity, easily proving Revlo’s worth to any marketer, brand or broadcaster,” said Trevor Antunez, cofounder of AG3NCY, in a statement. “Revlo provides a missing piece to the Twitch puzzle of viewer engagement.”

Similarly, Trick2G, the 14th largest streamer on Twitch by follower size, had a 41 percent lift in view time for his viewers using Revlo.

“We launched a sub-only rewards program using the Revlo platform with phenomenal results in the form of viewer engagement,” said Gavin Johnson, head of gaming at Monstercat. “Viewer watching time doubled; 25 percent of new subscribers redeemed a reward on Revlo within one week and 18 percent redeemed a reward within a day; and the likelihood that a new viewer would return the following week more than doubled.”