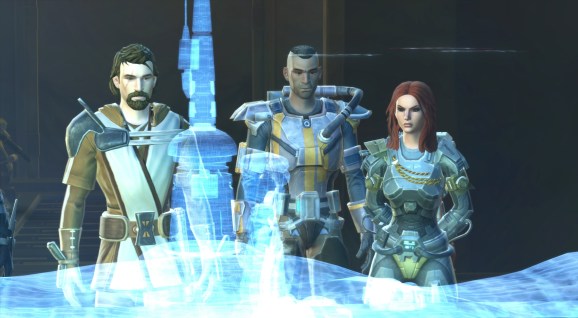 It ain't Star Wars unless someone's planning an attack around a holographic map.

If you’re playing through Star Wars: The Old Republic’s Knights of the Fallen Empire expansion, prepare to see lots of blokes walking around in Mandalorian armor.

BioWare announced today that the next episode in that storyline, Mandalore’s Revenge, is coming June 3 for the PC game. It continues the Knights of the Fallen Empire plot that started with that expansion’s release in October 2015. Content updates such as these are important to keeping paying players, and according to SuperData, The Old Republic was No. 3 in terms of pay-to-play massively multiplayer online games as of March 2016.

Star Wars: The Old Republic is one of a number of MMOs that offer both free-to-play and subscription options, holding content back for those who don’t pay until a later date after updates.

As your Outlander continues to lead the Alliance against the Eternal Empire, you receive help from the bounty hunter, Shae Vizla (fans of Star Wars: The Clone Wars recognize that surname as also belonging to another Mandalorian, Deathwatch leader Pre Vizla). As she’s the Mandalore, the leader of the Mandalorians, you end up trying to woo her and her deadly minions to your side.

The episode also comes with a new vehicle for subscribers — the Eternal Empire Patroller.