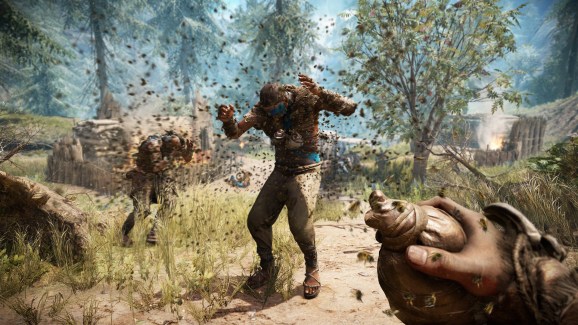 BEES! Your firearms are useless!

Ubisoft released its earnings for the financial year of 2015-’16 today, beating its target of $1.548 billion sales with a final number of $1.587 billion. That figure is down 4.8 percent from the previous year. The fourth quarter, however, saw a massive year-over-year jump of 267.7 percent, from $193 million to $711 million.

This performance is thanks to the strong sales for the online shooter The Division and prehistoric Far Cry: Primal, both of which exceeded Ubisoft’s expectations.

“We ended fiscal 2015-16 on a very positive note, having effectively executed our plan: the performances delivered by The Division and Far Cry Primal exceeded our expectations, we continued our major come-back in the multiplayer segment and we saw a significant increase in player engagement levels for our games,” Yves Guillemot, co-founder and chief executive officer of Ubisoft, noted in the financial report. “The Division currently has 9.5 million registered users, and active players are playing the game an average of three hours per day. These successes resulted in our digital segment outperforming our targets for the fiscal year and positively impacted our profitability.”

Ubisoft noted that The Division was the most successful new game launch ever, while Far Cry: Primal had the best sales performance ever for a game released in February. Another shooter, Rainbow Six: Siege, joined these in the list for five best-sellers during the first three months of 2016.