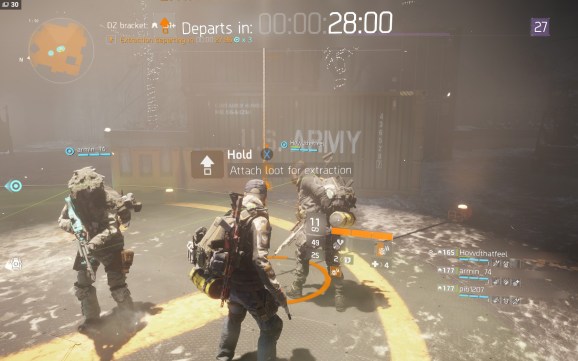 The Division keeps players coming back.

Ubisoft’s latest Tom Clancy shooter has caught on with a large crowd.

The Division has 9.5 million registered player accounts, according to the publisher’s fiscal 2016 financial report. That helped the company beat its revenues and earnings targets for the 12 month period ending March 31. The Division, which is a military shooter with a heavy emphasis on connected multiplayer, also gave a huge boost to the company’s efforts to retain players and keep them spending money on digital goods. Ubisoft’s digital revenues represented 32 percent of its total, which is a record for the company. This is a strong sign that the French game maker still has the chops to launch a major new franchise in the $99.6 billion gaming industry, an encouraging trend as the publisher diversifies its portfolio beyond annual releases of Assassin’s Creed.

During a conference call with investors, Ubisoft chief executive officer Yves Guillemot said that the 9.5 million number is not 1-to-1 for the sell-through of The Division to consumers. Instead, it is only indicative of how many people have purchased the game. He also noted that 91 percent of people who were playing four weeks ago are still playing today, with a 20 percent attach rate for its downloadable content season pass.

“We ended [fiscal 2016] on a very positive note, having effectively executed our plan,” Ubisoft chief executive Yves Guillemot said in a statement. “The performances delivered by The Division and Far Cry: Primal exceeded our expectations, we continued our major come-back in the multiplayer segment, and we saw a significant increase in player engagement levels for our games.”

Ubisoft also noted that The Division, along with Far Cry: Primal and the shooter Tom Clancy’s Rainbow Six: Siege, is one of the five best-selling games in the first quarter of calendar 2016. Ubisoft points out that these two games are the best-selling launches ever for the month of February.

Moving ahead, The Division’s online gameplay that encourages players to return regularly to go on quests and raids should aid in Ubisoft’s efforts to attract a more engaged audience. It’s easier to sell digital goods and downloadable content to a player that can’t pull themselves away from their favorite shooter.

“[The Division’s] active players are playing the game an average of three hours per day,” said Guillemot. “These successes resulted in our digital segment outperforming our targets for the fiscal year and positively impacted our profitability.”