If you think all betas are glorified demos, you’re wrong.

Gamers are buzzing about Overwatch, Blizzard’s upcoming team-based shooter. While it doesn’t debut until May 24 for PlayStation 4, Xbox One, and PC, plenty of people (about 10 million of them, actually) played it during its open beta last week. Even before then, Overwatch was in a long closed beta test since last fall.

Many view betas as thinly veiled demos these days (and they do serve an important marketing function). But looking at all the changes that happened during Overwatch’s testing period shows us just how much beta can help. When it started, Overwatch felt like bare experience hurt by major balance problems. At the end of its open beta, it already plays like a fully featured dream with a cast of likable, viable characters.

Some of the changes made during the beta just added stuff: new maps, some characters, even sprays (pictures that people can place around maps). Other alterations were purely cosmetic (like removing magazines opened to pictures of Overwatch’s female characters that were sticking out of outhouse doors). Some even changed existing maps, adding new paths to make it easier for attackers to reach their goals.

But the most important changes involved balancing the large cast and adding new features that rewarded people for playing. 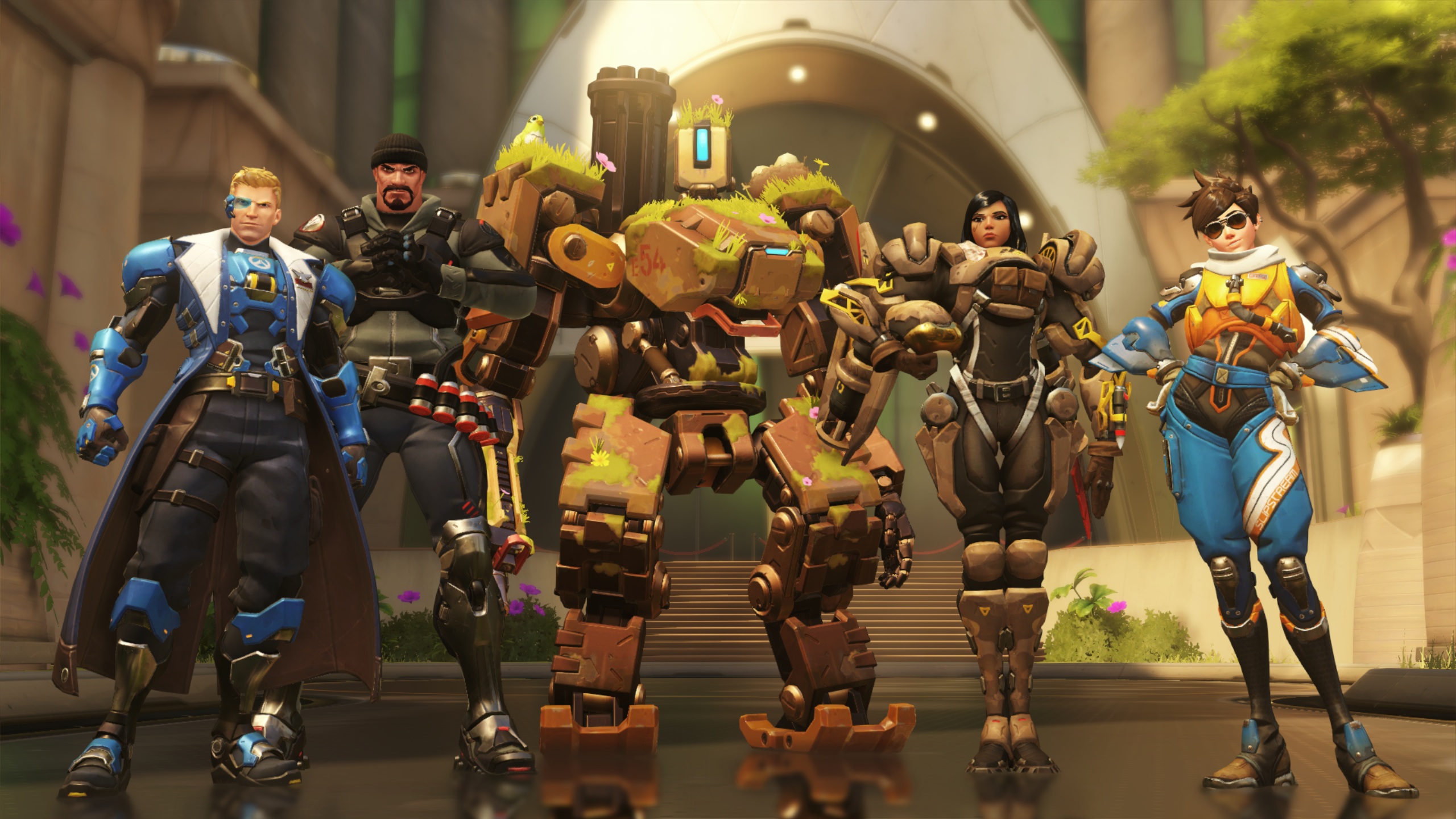 Above: Bastion (center) saw a lot of changes during the beta.

Blizzard’s most important job in the beta was balancing characters. In a team-based shooter with so many different fighters, each one needs to feel effective but not too powerful. Team 4 (the group that works on Overwatch) used the beta to implement and test out many changes. Some of these were minor: a light buff to damage here, a slight decrease to health there. Others were more substantial.

No character saw more tweaks than Bastion, a robotic defense-based fighter who can turn into a turret. Originally, Bastion had a barrier that helped to protect him from damage while in his turret form. Blizzard eventually removed the barrier, made his bullets less powerful, and added a new weak point on his back. He also saw the duration of his ultimate ability, which turns him into a powerful, mobile tank, reduced from 10 seconds to 8. It wasn’t all bad for Bastion, though. He originally only had a limited range of movement when in turret mode, but now it rotates 360 degrees.

Other characters have seen their entire playstyle changed. Take Zenyatta: The robotic support character used to be able to place orbs on characters that would heal or make them take more damage until they died. Blizzard thought that this design made the character too passive, so it made the orbs return to Zenyatta if the character they were on disappeared from the robot’s line of sight.

Blizzard would revert some changes. At one point it lowered the healer Lucio’s health from 200 to 150. Following player feedback, it restored Lucio’s old health and instead balanced the character by making his attacks less powerful. Also, Team 4 removed Mercy’s ability to float toward dead players after hearing initial complaints that some were targeting deceased characters by mistake. However, even more complained when the change happened, since many players used those dead souls to increase Mercy’s maneuverability. The functionality was quickly patched back in.

Some changes applied to all characters. Players once could generate charge for their ultimate abilities by taking damage. Blizzard got rid of that, instead having ultimate charge generate slowly over time. 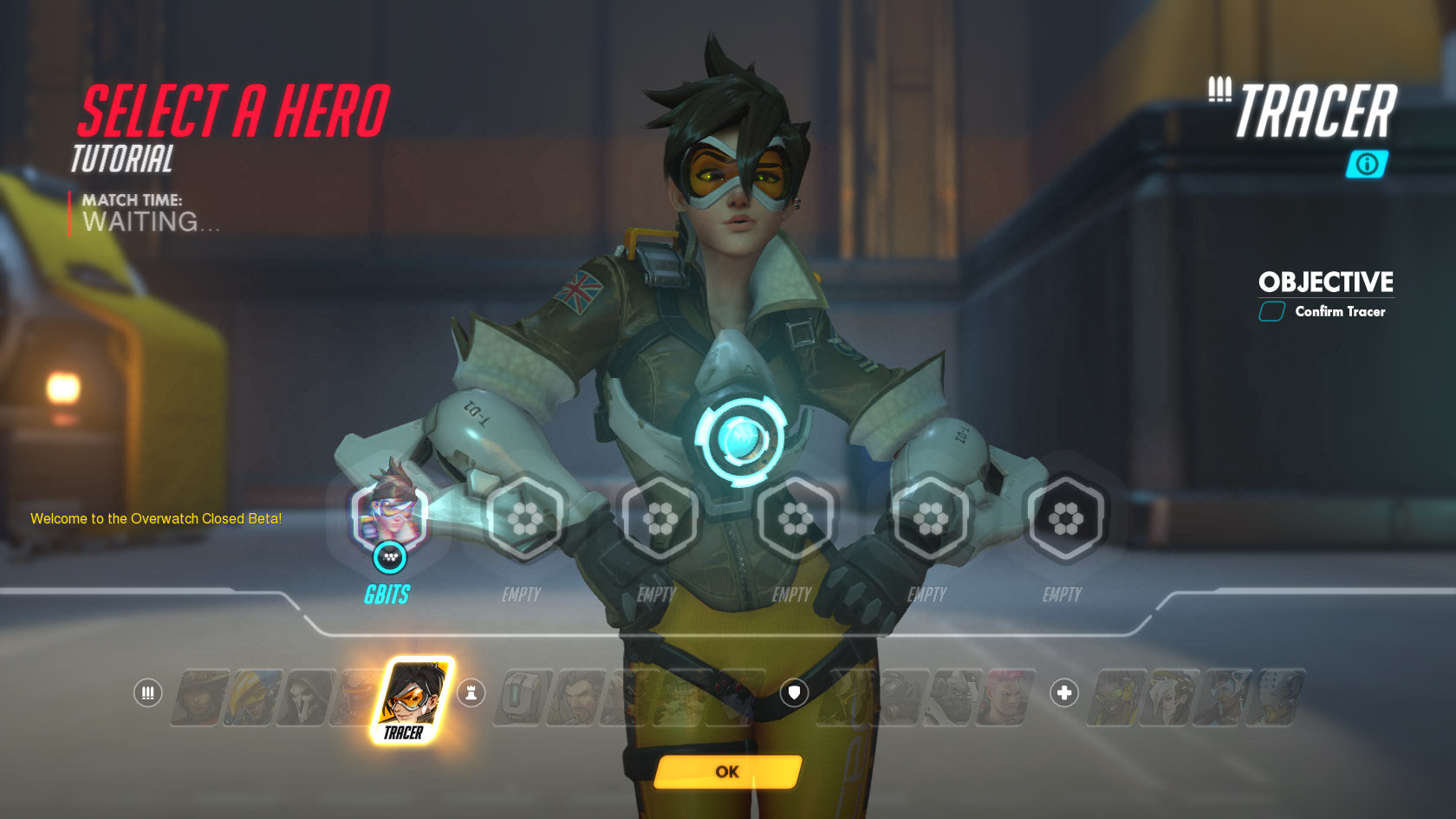 Blizzard used the beta to dole out new systems and features. Some of them were pretty standard, like support for achievements and private matches. Others were a bit more interesting.

Blizzard would later enable players to earn experience points and level up their account from playing matches. However, after earning a level, a player would earn a loot crate. These would contain cosmetic items only, like voice lines, spray icons, and (most importantly) new skins. This introduced a bit of a roulette system, since players became excited to level up and see if they would unlock a rare skin. Giving a player a level also gave them a badge of honor. It shows friends and competitors just how much experience a player has with the game

Blizzard also added Weekly Brawls to the shooter. These are similar to Tavern Brawls from another Blizzard game, Hearthstone: Heroes of Warcraft. It creates special rules for matches (for example, you can only play as women characters, or everyone’s ultimate charges much faster).

Toward the end of the closed beta, Blizzard introduced Competitive Mode. Only available for players at least level 25, this was meant for more serious combatants. Winning matches would increase your rank (which would reset every month). However, Team 4 disabled Competitive Mode once the open beta started, noting that it wants to revisit some of its systems, which some felt rewarded perseverance more than actual skill. Competitive Mode returns after Overwatch launches. 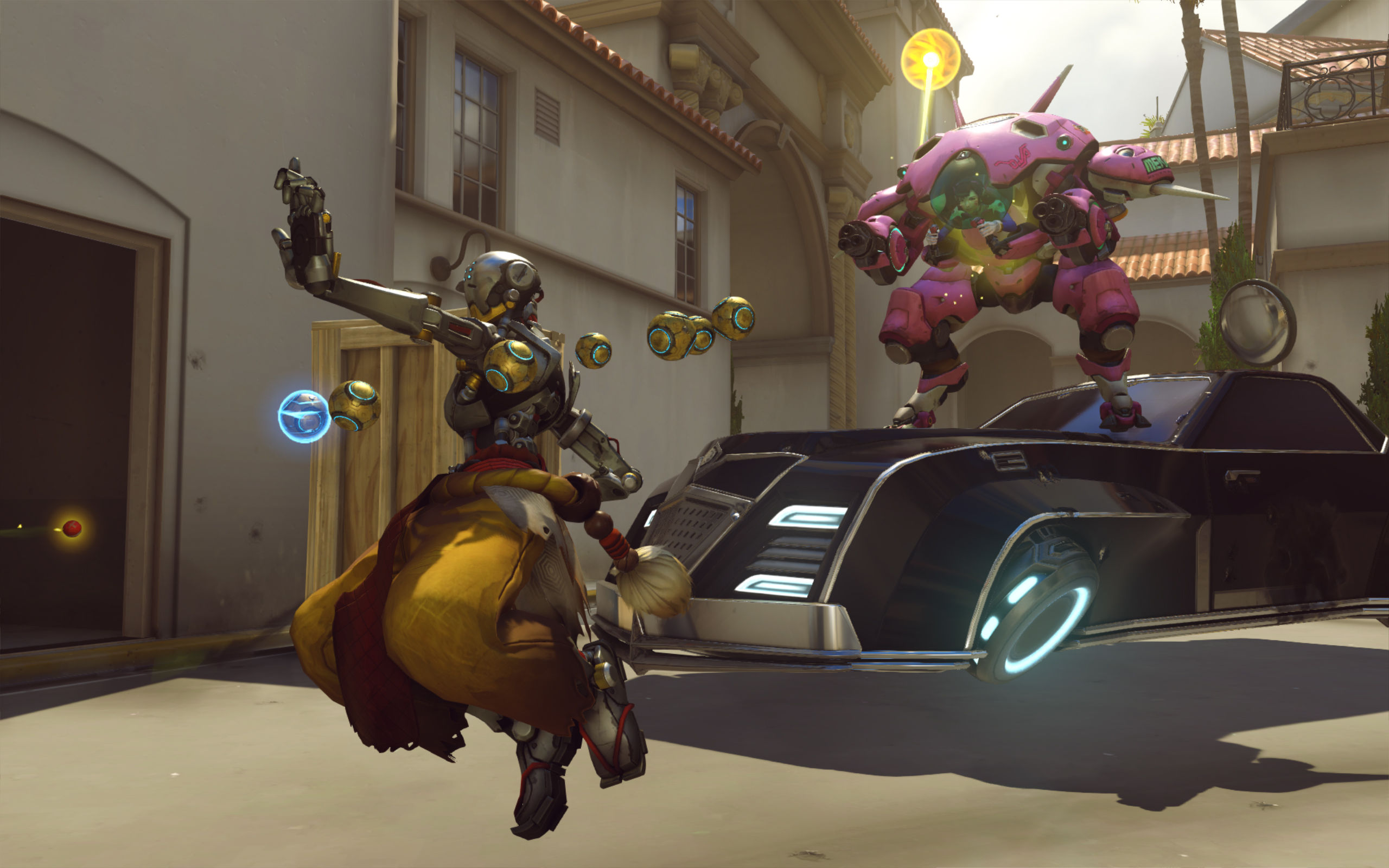 Above: Zenyatt’s orbs saw a major change during the beta.

Most of those changes happened during the closed beta. If you played Overwatch, chances are it was during the open beta. Blizzard didn’t make significant changes during this time. The characters and maps stayed the same. The open beta was more about testing servers and generating buzz.

We did learn some things from those 9.7 million players. We don’t know which characters were the most popular (Blizzard told GamesBeat that info is coming next week), but people seemed to gravitate toward heroes like Reaper, Soldier 76, and Bastion. These are uncomplicated characters that can be effective with little practice, especially against a wave of new players who are still trying to learn.

One thing that’s clear from the open beta is that it will take new players a bit of time to adjust to Overwatch’s style of team-based shooting. Those used to something like Call of Duty aren’t taking advantage of Overwatch’s vertical elements as much as they should. Characters like Genji and Hanzo can climb up walls, and Pharah and D.Va can fly around stages with some practice. Using these heroes takes skill and familiarity with the maps that a new player just won’t have.

Others, like those coming from multiplayer online battle arena’s (MOBAs), aren’t used to the idea of changing characters in the middle of the match. Some players become frustrated when a certain hero doesn’t work for them, yet they stubbornly stick with them until they lose. Again, knowing which characters you should play for certain situations and matchups is something that comes with time and practice.

Of course, many of those players won’t want to stick around long enough to learn if they become frustrated from dying to an endless wave of Reapers and Bastions. This can become a tricky problem for Blizzard. It could try to make characters weaker so that they don’t dominate new players as much, but that can then negatively impact a hero’s performance in matches with more experienced teams. While rookies complain that Bastion is too strong, he makes few appearances in matches full of higher-level players. Once you learn which characters can take Bastion out (specifically Pharah and Genji), he stops becoming a major threat.

It’s clear that Blizzard wants to target the competitive scene with Overwatch, so it may favor balance decisions that keep play for advanced players in check. If you became upset during the open beta because certain characters seemed over-powered or over-played, just know that thsoe troublesome heroes become less of a problem as you level up. 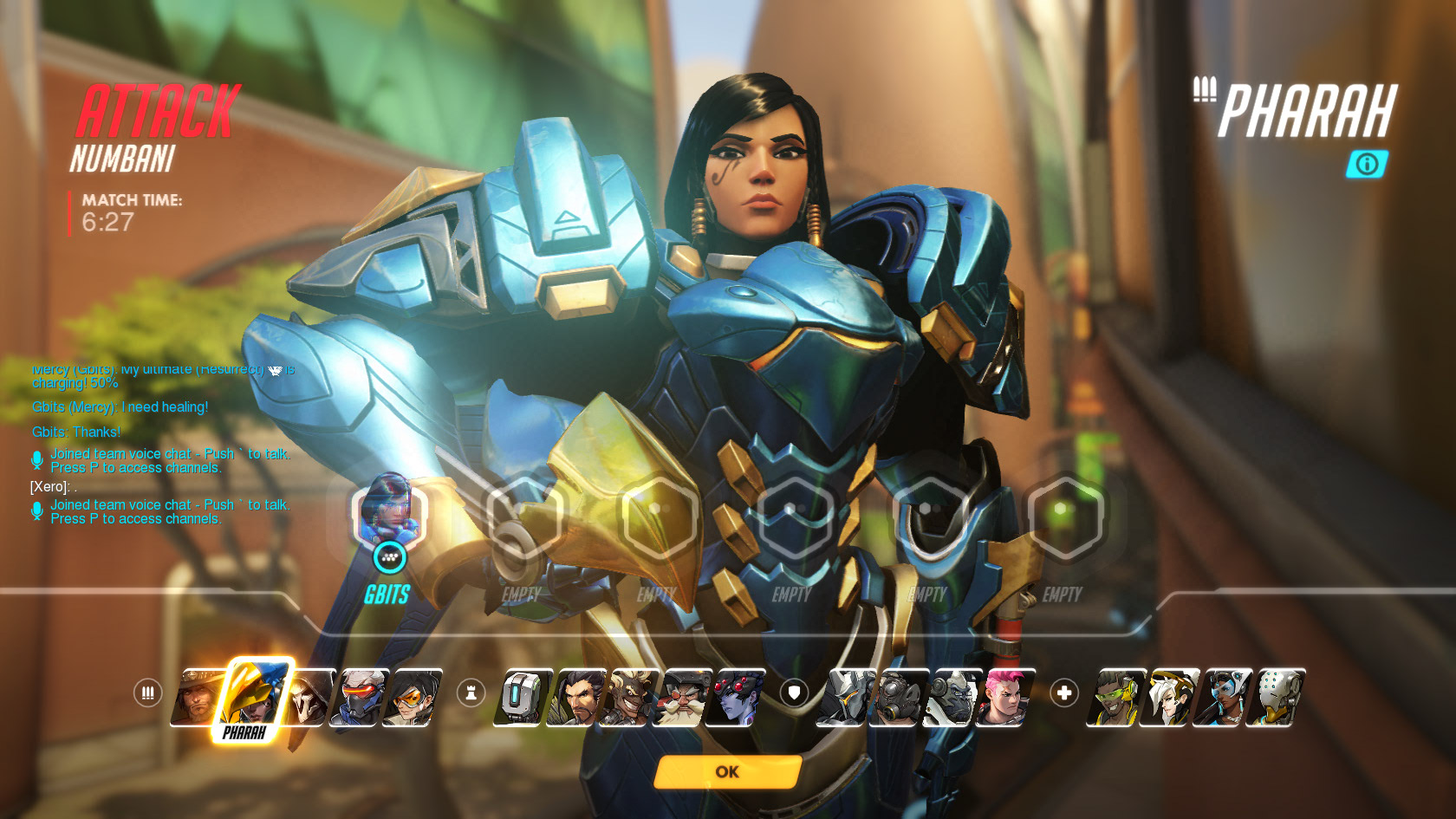 As someone who played about 50 hours of Overwatch during its beta period, I was happy with where it stood at the end of its testing. I like that the progression system gives you rewards without giving veteran players tools that give them an even larger advantage over newbies.

I also think that the cast is fairly balanced. In competitive games like this, tweaks will always become necessary as players discover new strategies and exploits. But with such a large cast, you can always switch your character if you’re having trouble. A Bastion might seem overpowered against a McCree or Lucio, but a rocket-spewing Pharah can that robot out easily with the right strategy. You need skill and teamwork to win. No character is so strong that they can beat a team of better players.

While Overwatch is ready for its launch, that doesn’t mean that Blizzard will stop making tweaks. The company has always been good about constantly updating, balancing, and adding new features to its games. Just like its transformation from the start of its beta to its end, Overwatch will look different in a year.