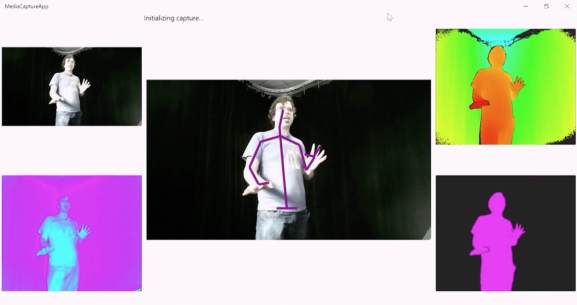 Data coming from Kinect in a universal Windows platform (UWP) app in Windows 10.

Microsoft today announced that its Kinect sensor device will be able to deliver more data to Universal Windows Platform (UWP) apps, starting with the release of the forthcoming Windows 10 Anniversary Update.

“With the Windows 10 Anniversary Update and a Kinect driver update, Kinect developers will be able to read RGB, infrared (IR), and depth data from the Kinect sensor,” the Kinect for Windows team wrote in a blog post.

The Kinect’s microphone already has UWP support, the team wrote. But in the future, it will be possible for UWP apps to use Kinect for face tracking.

It’s interesting to see Microsoft make more of Kinect in Windows 10. The system was first introduced in 2009, and creator Alex Kipman now focuses his time on the HoloLens. Last year Microsoft suspended production of the Kinect for Windows v2 sensor, although it still does sell the Kinect for Xbox One and a corresponding Windows adapter. And Windows 10 does have a considerable user base — it’s installed on more than 300 million devices. If anything, this is proof that Microsoft still isn’t ready to stop supporting Kinect app development on Windows.

The main code will be part of the Windows 10 Anniversary software development kit (SDK) supplemental Kinect SDK. Microsoft will also release a Kinect driver update later this spring, as well as a new Kinect software-development kit (SDK) in the second half of this year, the team wrote.

A new video gives a taste of what will be possible with the updates.