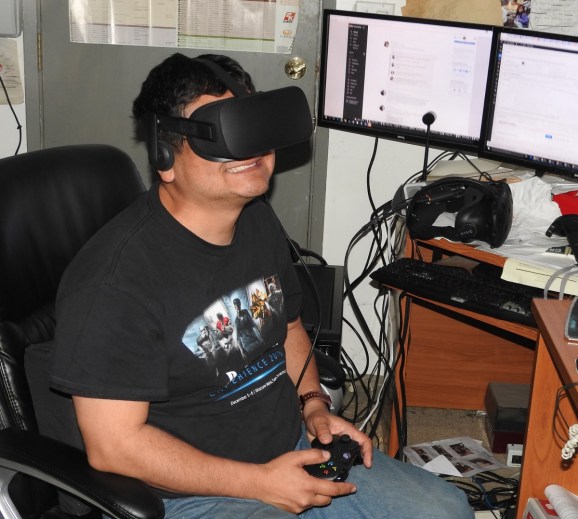 Dean Takahashi using an Oculus Rift in the wild ... something many people are still waiting to do.

Mark Zuckerberg (along with many others) believes that virtual reality will change the way we live, work, and communicate in many ways. Zuck may be right about the long term, but the truth is, VR isn’t quite ready for mass-market adoption.

While it’s true that 2016 may be the year VR headsets become more available, that’s not enough for mass adoption lift-off just yet. Sure, earlyadopters will jump on board this year, and while this is an important step for any technology to take, the reality is that early adopters represent only about 10 percent to 15 percent of the market.

Obstacles to mass adoption of VR

You can’t just slap on a VR headset and call it done; you also need a PC that’s compatible with the system. Right now, fewer than 1 percent of PCs on the market now can handle VR, and it’s estimated that they need to be seven times more powerful than current computers. That’s a significant offset for the cost of a less expensive headset.

Another big issue is content: Who wants to buy an expensive and clunky headset if there’s a limited amount to watch or play on it. Of course it’s a chicken-or-the-egg problem; producers and developers don’t want to create content for a device that nobody owns yet.

The evolution of VR

With the energy, resources, and star power of Facebook behind it, Oculus Rift is no doubt one of the brightest stars in the growing VR market. Having been in development for more than three years, many industry watchers believe it’s the best VR headset on the market. It’s not the only kid on the block, though.

The HTC Vive plugs into PCs and comes with a huge gaming ecosystem in place. The Playstation VR headset is set to release in October of this year, giving it pre-Christmas star power. Samsung developed the Gear VR in conjunction with Oculus, so it’s called Oculus Rift lite — but Samsung also does content very well. And, don’t forget Google Cardboard, the $20 cardboard box that turns your phone into a VR system.

A lot of systems are hitting the market, and each will find its own strength. VR has a foothold, and it is bound to continue to flourish as each set specializes in several areas:

If people are earning Periscope fame just by walking around a city with their phones, imagine the power of being able to see a faraway world in VR. After a viewer is hooked, a national airline could offer a discount, or users could earn hotel points by playing a quick game or taking a survey.

Not ready for its close-up … but soon

The question of when VR will hit mass-market appeal will be determined by consumers’ access to it and the software developed for it.

Right now, VR technology still seems inaccessible to most people, with the exception of Google Cardboard. Each headset also has various hardware issues that need to be solved. The technology might be exciting for early adopters, but the mass market will need a little more time to see the value.

Remember when smartphones were once just for tech geeks and entrepreneurs? Now most of us can’t remember how we ever lived without them. As content improves, headsets get lighter, and the price point drops, many people will start looking at this novelty item with more interest.

The VR market is forecast to grow to $70 billion by 2020, up from an estimated $6.7 billion this year. For Facebook and other players, that lucrative market seems worth the wait.

A highly sought-after consultant, super connector, trusted adviser, celebrity wrangler, and thought leader, Kelli Richards is the CEO of The All Access Group.