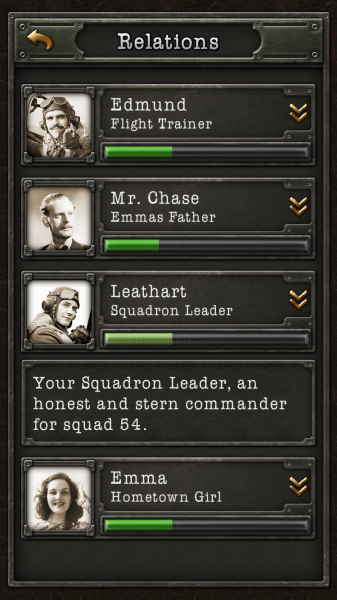 Above: Your relationships factor into your tale in Hearts of Iron: War Stories.

Plenty of console and PC games have companion apps nowadays. They’ve been getting novelizations for decades as well. But for its upcoming Hearts of Iron IV strategy game, Paradox Interactive is mixing both.

The Swedish publisher released Hearts of Iron IV: War Stories today. This “gamebook” is a companion to the grand strategy World War II game, which hits PC on June 6. Think of it like a “Choose Your Own Adventure” book in app form, linking to Paradox’s Hearts of Iron IV. Though known for its PC products, the company has released a few mobile apps before, dipping its toes into a $34.8 billion market. The first five chapters of War Stories are free, and the remainder cost $5 each.

War Stories starts by telling World War II’s stories from a young British pilot’s viewpoint during the Battle of Britain, the air campaign in 1939 when Nazi Germany flew sorties and bombing runs over the United Kingdom day and night. Like any “Choose Your Own Adventure” tale, you make decisions that dictate how the story plays out.

It’s unlike anything Paradox has done before. And according to the publisher, it’s something they did for their players, as the idea behind War Stories is a natural extension of the studio’s grand strategy main courses, like Crusader Kings.

“The decision to develop Hearts of Iron: War Stories was actually driven by the fans of our non-mobile titles,” a Paradox spokesperson said over email. “Our grand strategy titles on PC, Mac, and Linux, such as Hearts of Iron IV, are fantastic ‘what-if” simulators. You can play as any country in the world during WWII and see how your choices in the game affect the outcome of the war. And many players of our grand strategy games write amazing stories of their experiences in the computer games.”

The writer is Aaron Rosenberg, who has written a number of books based on games, including Paradox’s own Crusader Kings II and Blizzard Entertainment’s StarCraft and Warcraft. He’s also written on other famous properties such as Star Trek and Warhammer.