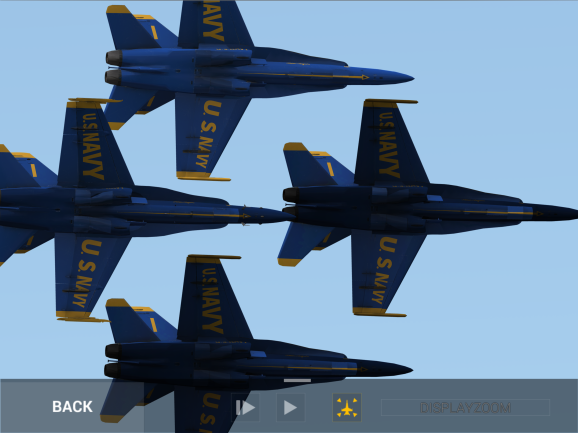 Flight simulators have found a new life on mobile, but this is the first time that the United States Navy’s elite performance team is getting its own game for smartphones and tablets.

The mobile game dev studio Rortos announced today that it’s working on Blue Angels: Aerobatic Sim. The Italian company, which says it has 55 million players for its titles such as Carrier Landings and Helicopter Sim, plans to bring it to Xbox One and PC at a later date. It’s an officially licensed app, and these kinds of deals can help a game stand out in the $34.8 billion mobile market.

This sim features all of the Blue Angels’ maneuvers, and you can perform these either solo or in a formation. You can also make custom maneuvers and airshows to show off your skills.

“We are completing the development of a flight simulator dedicated to aerobatics and aerobatic demonstration squadron flying”, said Rortos CEO Roberto Simonetto in a canned statement. “We are grateful for the pilots and the whole team of the U.S. Navy Blue Angels who provided an accuracy verification that allowed us to create an exciting simulator for a unique and engaging gaming experience.”

Rortos booted up its business in 2012, calling Verona, Italy, its home.