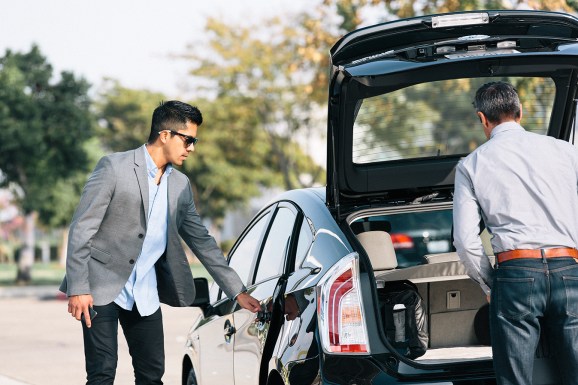 Getting picked up by an Uber at the airport.

Uber is continuing to figure out the best way to provide sound customer service to its drivers. The private on-demand car service announced today that it’s trialing in-app phone support for drivers within the San Francisco Bay Area.

Above: How Uber’s in-app phone support feature works within the driver app.

The addition of phone support may come as a surprise, given that Uber has implemented changes so that both rider and driver inquiries are managed through the respective apps.

However, project manager Michael Sheppard told VentureBeat that it’s not a reversal of previous updates. “It’s one of the next steps we can take to find out which support channel works best,” she said. “It’s one place to get interaction where [drivers] can get as much context to solve a problem upfront and eliminate all the back and forth.”

Michael Mizrahi, the company’s global community operations lead, believes that this program will be welcomed by drivers: “Partners would love to get in touch with Uber on the phone.”

The thought is that by opening up this extra line of communication between drivers and the company, Uber can provide points of contact that everyone’s comfortable with. “We want to understand what the best mix of support is,” Sheppard said.

Within the Help section of their Uber app, drivers will see all the standard topics and information provided. But in the top right-hand corner of the screen, there will also be a phone icon that, when tapped, will connect drivers to an Uber hotline. Just as you’d expect with an interactive voice response (IVR) system —  similar to those used by Comcast or a bank — drivers will hear directory options, such as lost items, payment questions, missed tolls, and more.

The launch of this pilot program is part of the company’s effort to develop its partner app in order to make it more useful to drivers. This update comes on the heels of previous updates, which include the addition of a fuel finder map and enhanced dashboards that drivers can use to find their ratings, reviews, and earnings.

Right now, in-app phone support is limited to the more than 40,000 active drivers in the San Francisco Bay Area, and even then, it’ll be rolling out slowly over the next couple of months. “We’re doing it slowly to understand the volume and type of questions we’ll get,” Sheppard explained.

There are currently no plans to extend this option to riders — they will still be limited to submitting feedback and complaints through the company’s mobile app.

Uber drivers will be notified within the app when they have access to phone support, and it’ll be available on both iOS and Android apps.