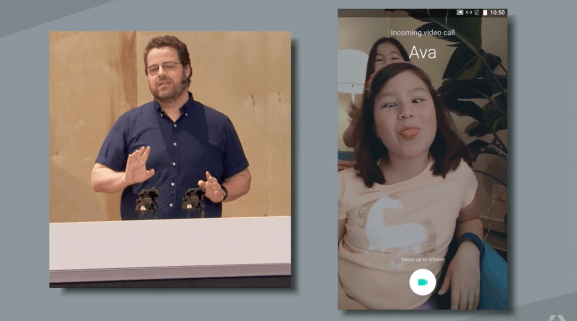 Google today launched a new video calling app called Duo, as a sort of companion to the new Allo messaging app that was also introduced today at the Google I/O developer conference in Mountain View, California.

Duo calls are end-to-end encrypted, said Google engineering manager Erik Kay. But the feature that makes Duo stand out most from other mobile-friendly video calling services — including Skype, Facebook Messenger, and Facebook’s WhatsApp, not to mention Google’s own Hangouts — is something called Knock Knock.

It’s a “live video stream of the caller before you’ve even picked up,” Kay said. You “not only see who’s calling, but what they’re up to and why they’re calling. A smile, a beach, and a newborn baby can all draw you into the moment, making calls feel spontaneous and natural, and once you pick up Duo it puts you right into the call.”

Like Hangouts, Duo video calls run on top of WebRTC. Duo relies on a fairly new Google protocol called QUIC (for “quick UDP Internet connections”), and it can perform a “seamless handoff” of calls between Wi-Fi and cellular connections, Kay said.

One thing Duo doesn’t have is support for calls between more than two phone lines.

The app will become available on Android and iOS this summer, Kay said.