The growing size of the most popular chat apps doesn’t seem to be deterring new entrants who believe they can offer something different.

Yesterday, we saw Alphabet’s Google announce a new chat app, Allo, which hopes its various artificial intelligence features will help it stand out against Facebook’s WhatsApp and Messenger. Today, we get a very different vision from Finland-based Futurefly, a team of former game designers backed by an interesting array of investors.

Futurefly has at last released Rawr Messenger, the 3D-animated avatar chat app that it has been teasing for months now. I got a preview of the app last November when I met cofounder Oskari “Ozz” Häkkinen at the Slush Conference.

The idea is that people are actually using four or five chat apps, and Rawr simply wants to be one of them. The app is available now in the iTunes store for iOS, and an Android version is coming later this year.

Rawr is offering a mix of traditional chat and video game mechanics. Users can create a highly personalized 3D avatar of themselves. Once in the chat, they can use a series of hashtag commands to animate the avatar, getting it to do everything from eating to dancing to, well, puking.

Having played with it this morning after it went live, I found the hashtag commands pretty easy to pick up (and there are number of preset ones that can be activated with one tap). 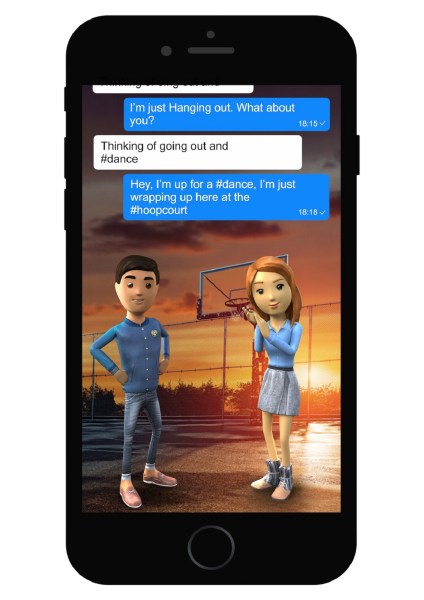 Of course, part of the challenge any new chat app faces out of the gate is getting users to convince their friends to download and join so they actually have someone to chat with.

Rawr hopes to get around that in two ways. First, it has a feature called “Globetrotting,” which matches users with another random person to chat with, in hopes that the chance to try out all the hashtag animations will be amusing enough no matter who is on the other end.

But second, Rawr offers users the ability to capture and share conversations across other social media services and apps. “This allows for mini-stories to be told, with users being able to customize their avatars to impersonate celebrities, public figures and literary characters, and share the conversations in order to amuse their friends,” says the company’s press release.

In terms of the business, Rawr already has a number of deals with various clothing companies to offer virtual goods under their brand within the app. Users of the app can earn virtual currency by spending time in Rawr, which they can then use to buy other goodies.

As Futurefly was building the app last year, it announced that it had raised $2.5 million from a string of investors, including the European VC firm Vision+; Tekes, the Finnish fund for technology and innovation; Broadway Video Ventures; and NYC-based Betaworks.

In addition, the company received another $500,000 in private investment directly from Nokia chairman Risto Siilasmaa, gaming executive Keith Boesky, and Arielle Zuckerberg, sister to you-know who. Zuckerberg made her investment personally before joining Kleiner Perkins.

“The bigger vision is to innovate the consumer app space by bringing game mechanics front and center to the experience,” Häkkinen told me last year.

Here’s a little video their team cooked up to give you a better sense of how this all works: