When you’re getting into the blooming virtual reality market, you need strong partners. Few could be better than Epic Games, the developer behind the powerful game-making tool Unreal Engine 4 and decades of blockbuster hits.

Earlier this week, Epic Games announced that it created a plugin for Google’s new VR platform, Daydream, that would allow developers to use Unreal Engine 4 to create games and experiences for the device. It also showed off a demo of a classic fantasy-type dungeon experience running on the platform.

GamesBeat: What makes Daydream different from other VR platforms?

Nick Whiting: It’s mobile-based. One of the nice things is that it’s built into the Android platform, which a lot of smartphones are based on these days. We’re hoping it broadens the market as far as high-quality mobile VR experiences.

In a year or two, hopefully a lot of people will have this class of phone in their pocket. It’s a much lower barrier to entry for a lot of people who want to get into VR. The other cool thing about it is that every one includes a motion controller. It allows us to add interactivity to the demos we make for the platform, which is something we haven’t had on the mobile VR platforms before.

GamesBeat: What do you think makes it stand out compared to the other major mobile platform, Gear VR?

Whiting: The inclusion of the motion controller as a benchmark is the thing that, in my mind, sets it apart from other mobile platforms. One of the first things you do after you get into VR is you look around and take in the world, but then you look down and try to see your hands. When you don’t have a way to interact with yourself, it breaks the magic of VR. People ask, where are my hands? How do I use things?

People instinctively see something and they want to reach out and grab it. It’s always a little disappointing. But Daydream adds that ability to interact with the world as a platform-level requirement.

Above: So many generic game items to choose from!

GamesBeat: The kind of thing you’re developing for it, besides this demo, are you doing the same kind of things you would for Oculus, or are you building things from the ground up for this different platform?

Whiting: Because it’s mobile VR, you have to think about the experience a bit differently. You have to do more abstraction and optimization. You can’t run something like Bullet Train that we released a year ago on a mobile phone, because of the power of the device.

One of the important things about Daydream is thinking about the application you’re developing in terms of the power you have in the device. We use a lot of stylized visuals and so on, because they’re easier to render. With the three degrees of freedom motion controller, it’s not the same as having positional tracking, so you have to think about how best to read the intent of the user, rather than just perfectly emulating what they’re doing in the real world. Which is a fun and interesting design challenge.

GamesBeat: Something I see in this demo and a lot of VR games is this idea of teleporting the player as the main means of movement. Do you think that’s the best solution we have right now for navigating a 3D space in VR?

Whiting: It’s a good solution right now. It’s not the ultimate solution. We can address that in a few different ways. As time goes on we’ll figure out a grammar for VR demos that will let us be a bit more creative with design. Right now it’s still very early days. Teleporting is a solution that gets us going while we iterate on some better ideas.

GamesBeat: Looking at the demo, it’s very obviously playing on tropes that are very video game-ey in a way — the magic, the inventory, stuff like that. Sometimes we see VR demos that are much more experience-based. It seems like you guys were deliberately trying to show something that looked like a video game.

Whiting: We wanted to do something where you had interaction in the world. One of the tropes we go back to is video game interaction, as opposed to the more filmic experiences that people have done. It was a combination of Shane Caudle, who was doing the demo, it’s just his personal preference and style, what he’s into. And in addition, it’s a good thing to have some familiar interactions to use the dungeon as a teaching tool and a benchmark for content.

Above: “I attack the darkness!”

GamesBeat: How do you guys think about VR right now? Is this something where you’re going to produce money-making experiences this year, or are you still in an experimental phase?

Whiting: It’s definitely something where we want to be on the up side of the wave. It was very important, because VR is changing, to learn as much as we could about it. That’s why we’ve been making tech demos every few months and comparing things on the different platforms. It’s still early days. We don’t have a decisive winner.

Nobody knows what form the VR market is going to take in the next few years. Right now it’s all about exploring everything and discovering what’s good. We need to figure out what’s going to stick. But it’s definitely here to stay.

GamesBeat: The Unreal engine is known for pushing things graphically. Is it still able to bring the kind of visuals it’s known for on a mobile platform?

Whiting: I think so. That’s what we’re trying to shoot for with the dungeon app. A lot of people’s first VR experiences will be on mobile because it’s so acceptable and so ubiquitous as a platform. Unreal can still deliver those kinds of experiences. You’ll just see different experiences on different platforms. You have to play to the strengths of the platform. 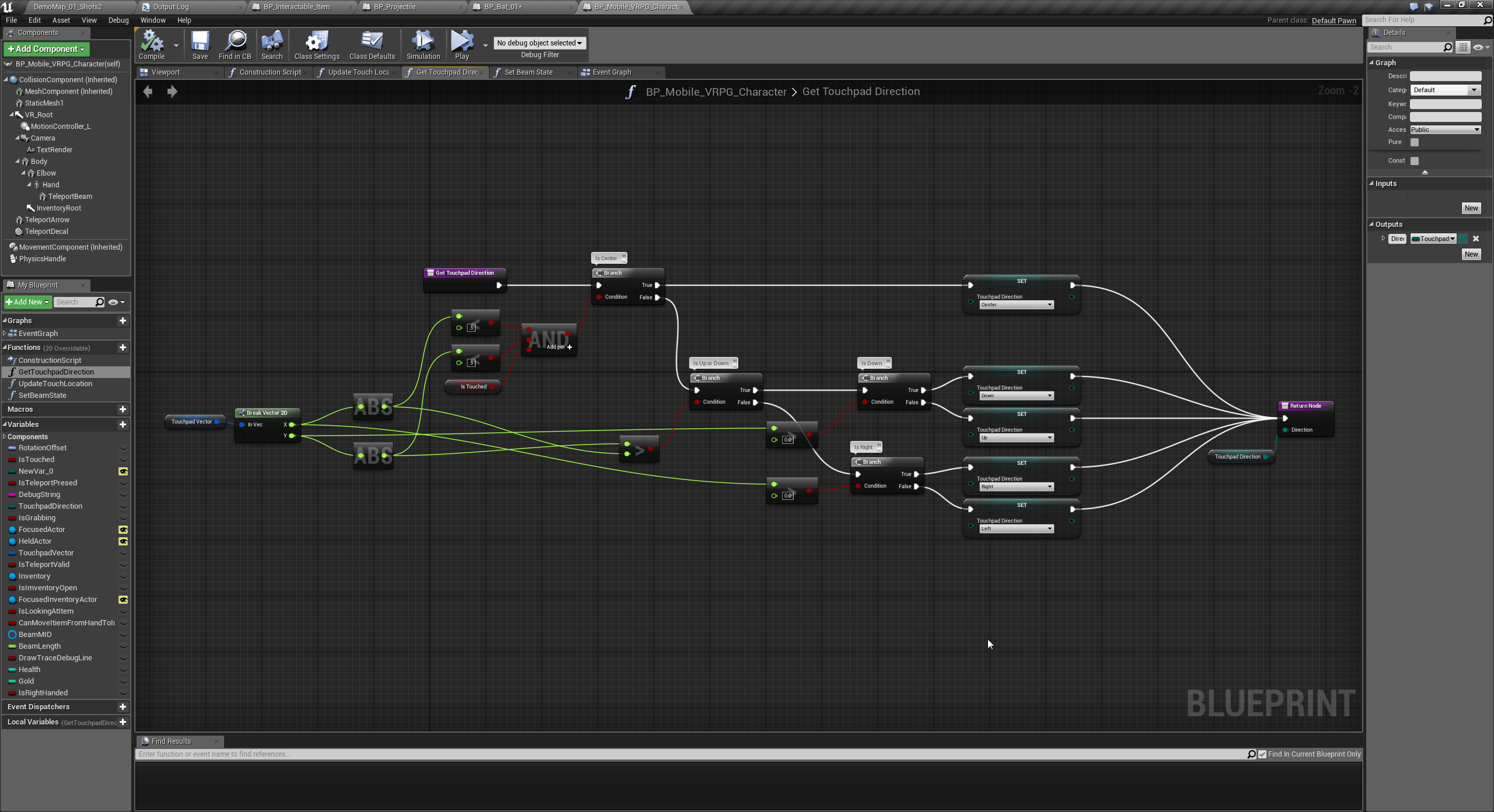 Above: Developing with Unreal Engine 4 on Daydream.

GamesBeat: What’s the full plan for this dungeon app? Is it just going to be a demo, or do you have plans to expand it into something bigger?

Whiting: Right now it’s just a tech demo, same as we did with our other demos that we’ve released for other VR platforms. We’re trying to establish technical and visual benchmarks, give us something to test our optimizations for more real-world content to come.

GamesBeat: Is this the only experience that you’ve created for Daydream so far?

Whiting: It’s the the only thing we’ve done past a test level. We wanted to let Shane Caudle, our artist, loose on the platform before we try to make a full experience. We can get a lot of valuable lessons about what works and what doesn’t.

GamesBeat: The Unreal engine experiences we’ve seen so far have tended to show us new ideas and new images, rather than stuff based on familiar Epic franchises. Have you talked at all about bringing any of those established franchises to VR?

Whiting: We’re looking at all of our options right now, but we don’t have anything to announce at this time.