The Google Cardboard headset has been interesting. Because it’s so simple and inexpensive, a whole lot of people have tried out virtual reality (VR) with it. But it doesn’t give you much control, so experiences are necessarily limited.

With Google Daydream, introduced earlier this week at the annual Google I/O developer conference, people will be able to do so much more than just sit back and watch YouTube videos.

As Google VR head Clay Bavor explained during Wednesday’s keynote, there are three parts to Daydream: smartphones, headsets and controllers, and applications. But it’s easy to say which one is probably most important. That would be the controller. It doesn’t single-handedly make Daydream an Oculus or Vive competitor, but it does mean that the system will be able to pick up a lot more input than Cardboard.

And this isn’t the only thing that distinguishes Daydream from Cardboard. There is a full visual interface. There are high standards for applications. And there is support for in-app purchases, which can be more conducive to ongoing usage and give developers a consistent revenue stream.

When you consider it all, you get the feeling that for Google, Daydream is less of an experiment or a novelty and more of a platform that people can use for a long time to come.

Unlike Cardboard, and not unlike the consumer version of the Oculus Rift, Daydream is equipped with a home screen that will launch you right into certain apps and tools, like the settings menu. The “discovery windows” for curated apps in the top row will have a parallax effect that makes images appear to move, and they can deep-link into specific content within the apps.

Above: The Daydream Home screen.

The Google Play Store has also been given a special presentation. At least initially, there will not be a whole bunch of categories to peek into, but the essential things will be there. “Featured” shows the curated stuff that Google thinks you should check out. “Popular” will be the place to find what’s on the top of the charts. And, of course, “Games” houses a bunch of games, and “Apps” will be for apps.

Once you get into one of these, you’re not going to see a dense grid of programs to choose from. You’ll be able to look at a tile one app at a time. “Even though we have more space, we’re actually showing fewer things,” Brahim Elbouchikhi, a product manager for Google VR, told developers in one session at I/O.

When an app or game catches your eye, just click on it and you’ll be brought to an immersive page.

Above: The page for Google Street View in Google Daydream.

There will be a photo sphere to give you a sense of the app or game. Of course, there will be reviews and an average rating number, a version number and the size, and screenshots and videos, but there will also be a new piece of information called “motion intensity.” Programs will be described as having no motion, moderate motion, or intense motion, said Google staff designer Alex Faaborg.

And unlike Google Cardboard, it will be possible to buy the premium version of an app while you’re in the middle of an experience with Daydream. There will be no need to pull the headset off your head — and, similarly, Android N will display notifications of phone calls and text messages while you’re using Daydream.

The controller will be small, but it will be powerful.

It contains a gyroscope, an accelerometer, a magnetometer, a touchpad, buttons, and a fine sense of orientation for understanding where it is in 3D space. The controller has three degrees of freedom, or DOF: yaw (where you’re pointing), pitch (elevation), and roll (twist). In human terms, every little movement of your wrist or your arm provides a signal that the headset will register. 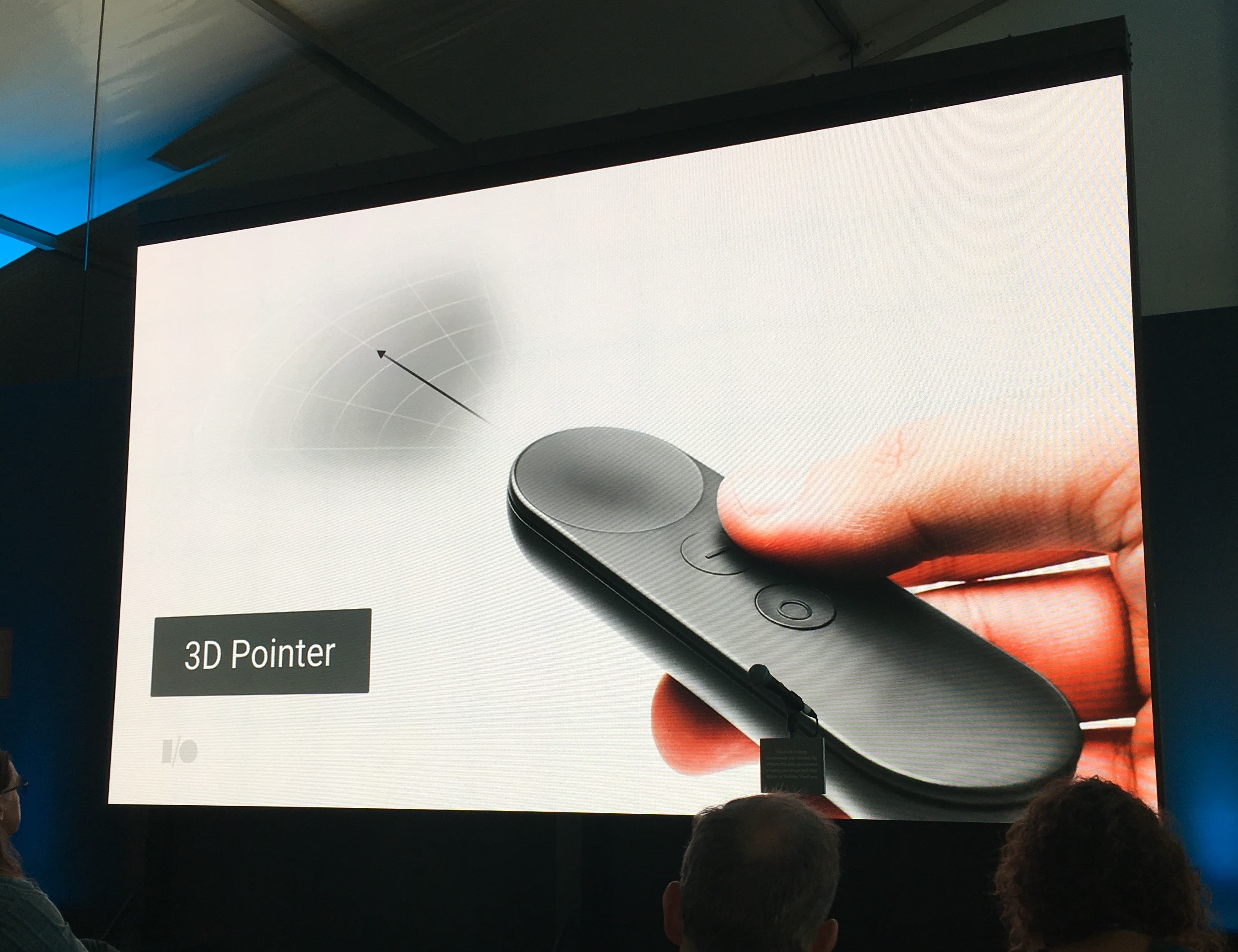 Above: The Google Daydream controller.

There’s a big round curved touch pad at the top that you can tap and swipe and even click. Beneath the touch pad, there’s an app button that will do different things in different apps — bringing up the menu, pausing and un-pausing, or maybe bringing up a toolbox so you can choose a tool. And beneath the app button is the “home” button. That will bring you back to Daydream Home. On the side, you’ll find dedicated hardware buttons for turning the volume up or down. 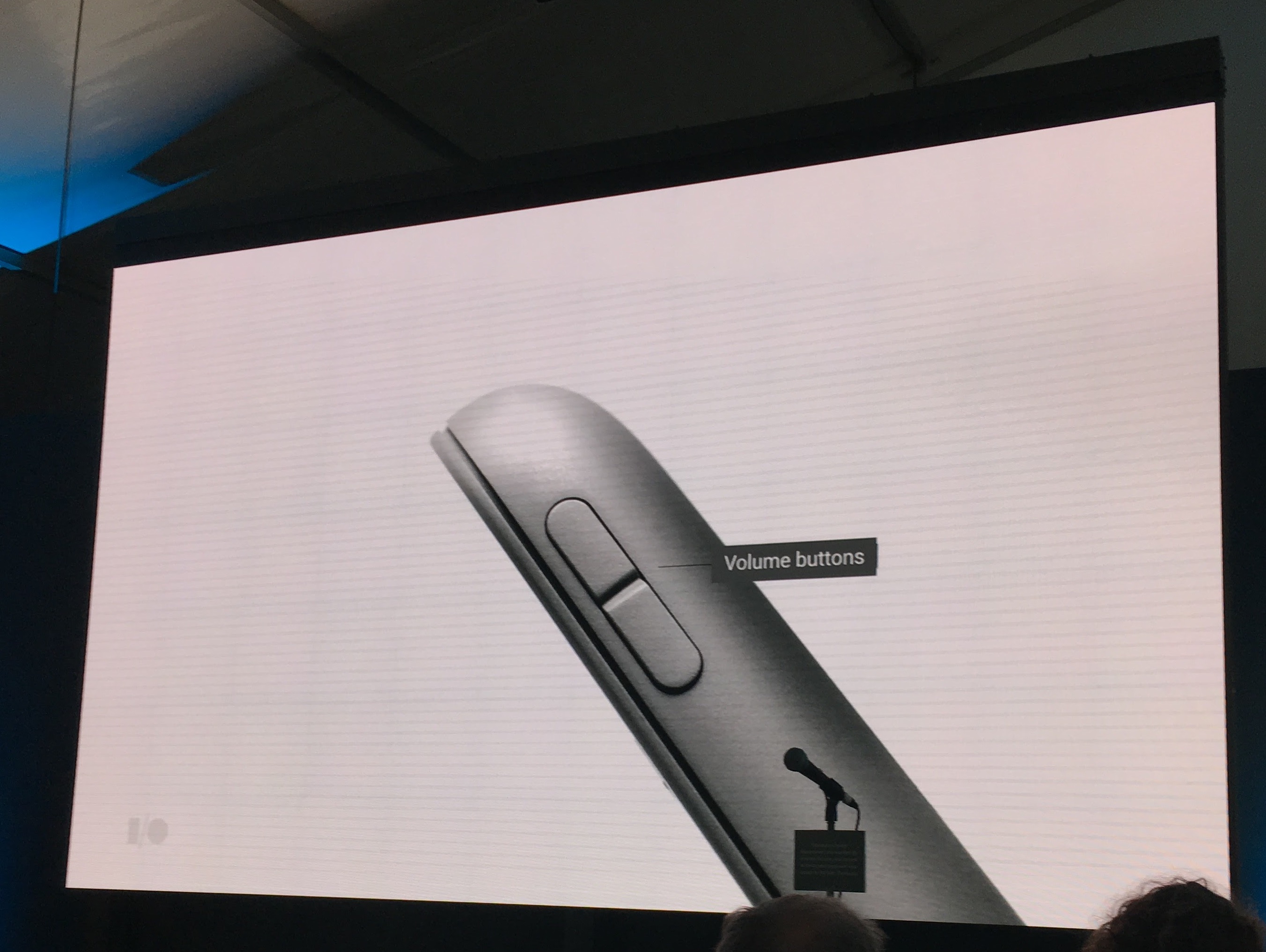 Above: The volume buttons on the Google Daydream controller.

“The ultimate goal was a powerful, simple tool that fits right in your pocket,” said Google hardware interface designer Basheer Tome. Simplicity is important when you have your eyes covered by a headset.

Google has put together instructions for a development kit, but Daydream controllers and headsets are not yet available. For now, developers can essentially use a smartphone as an emulator for the controller. The company even came up with a sticker that you can fix on top of the phone’s display so you can get a feel for where to put your finger. It’s kloodgy, but it will work for the time being.

Just as Cardboard did, Daydream is getting its own mobile app. One feature in the Daydream app that’s worth calling out is the queue, which allows you to download content so that it’s ready to go when you slip your phone into a headset and enter VR mode. 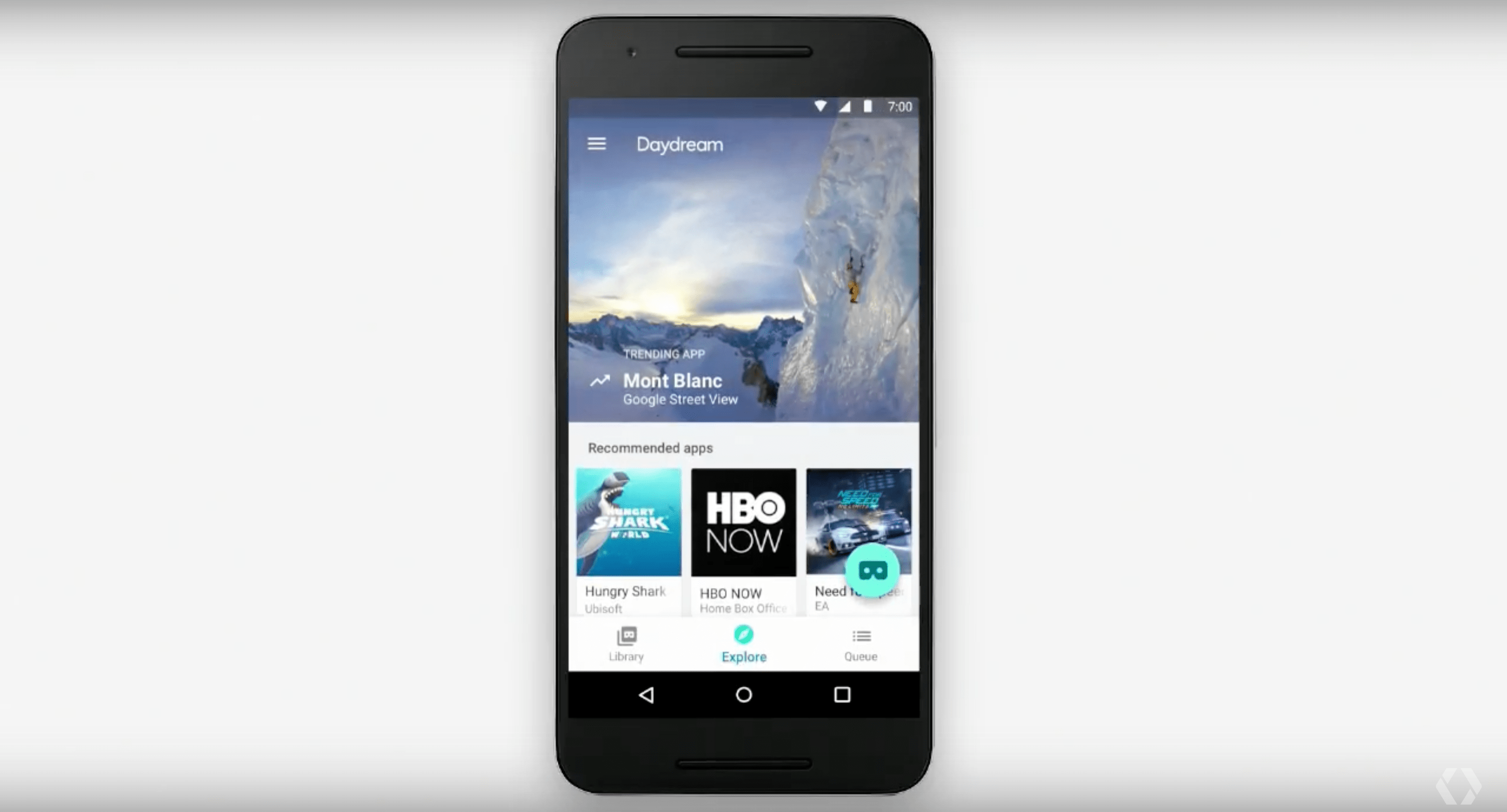 One of the biggest attractions when Daydream ships will inevitably be YouTube, which is coming out with a dedicated YouTube VR app for Daydream. “Thanks to the big, early bet we made on 360-degree and 3-D video, you will be able to see all of YouTube’s content on the app — everything from classic 16×9 videos to 360-degree footage to cutting-edge VR experiences in full 3-D,” Kurt Wilms, senior product manager for YouTube VR at Google, wrote in a blog post. But there will also be things like voice search, playlists, and discovery, which will make it stand out from what’s available on YouTube with Cardboard.

To get a sense of what’s next, you can look at prototype apps that Googlers and a few lucky developers have made.

You can play drums, and arrange the drums exactly in the position that you would like them. You can water a plant or scoop up some dirt in a garden. You can stretch a couch or a speaker in the middle of a virtual living room, or you can make copies of these objects and stick them together to form a sort of postmodern statue. Or you can climb up a ladder, if you want to. (HTC Vive controllers are not included with the Daydream — so it’s unclear whether that would work with a single Daydream controller.)

You can type on a virtual keyboard. Every time you strike a key, you hear a satisfying clicking sound, so the experience is more than visual.

You can cast a line with a fishing rod. You can flip pancakes.

Just like in the Job Simulator for HTC Vive, you can chop up food in a virtual kitchen. You can try cutting up larger-than-life apples, if you want. 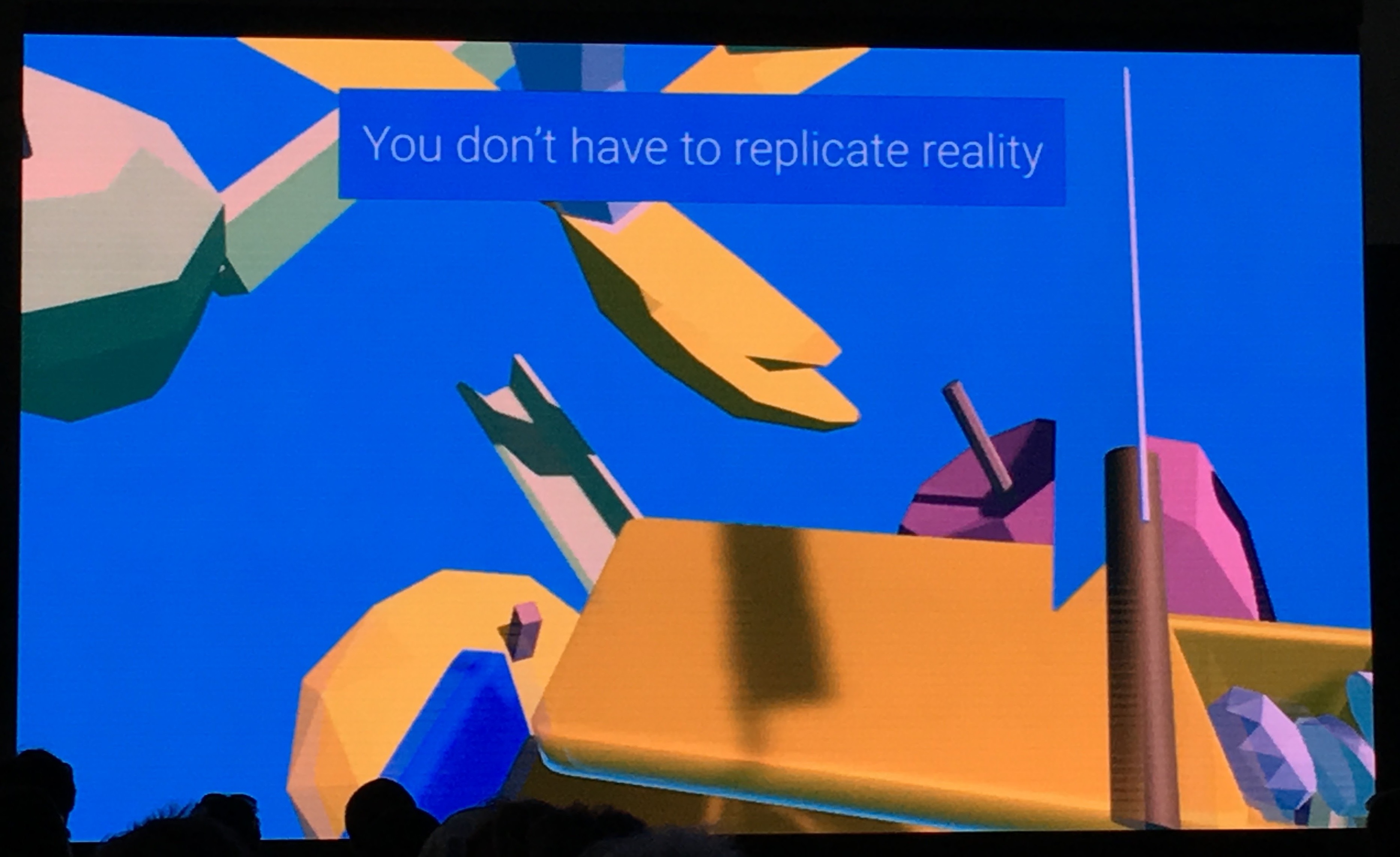 Above: In the kitchen with Google Daydream.

Or, if you feel like doing something serious, you can visualize data in 3D. 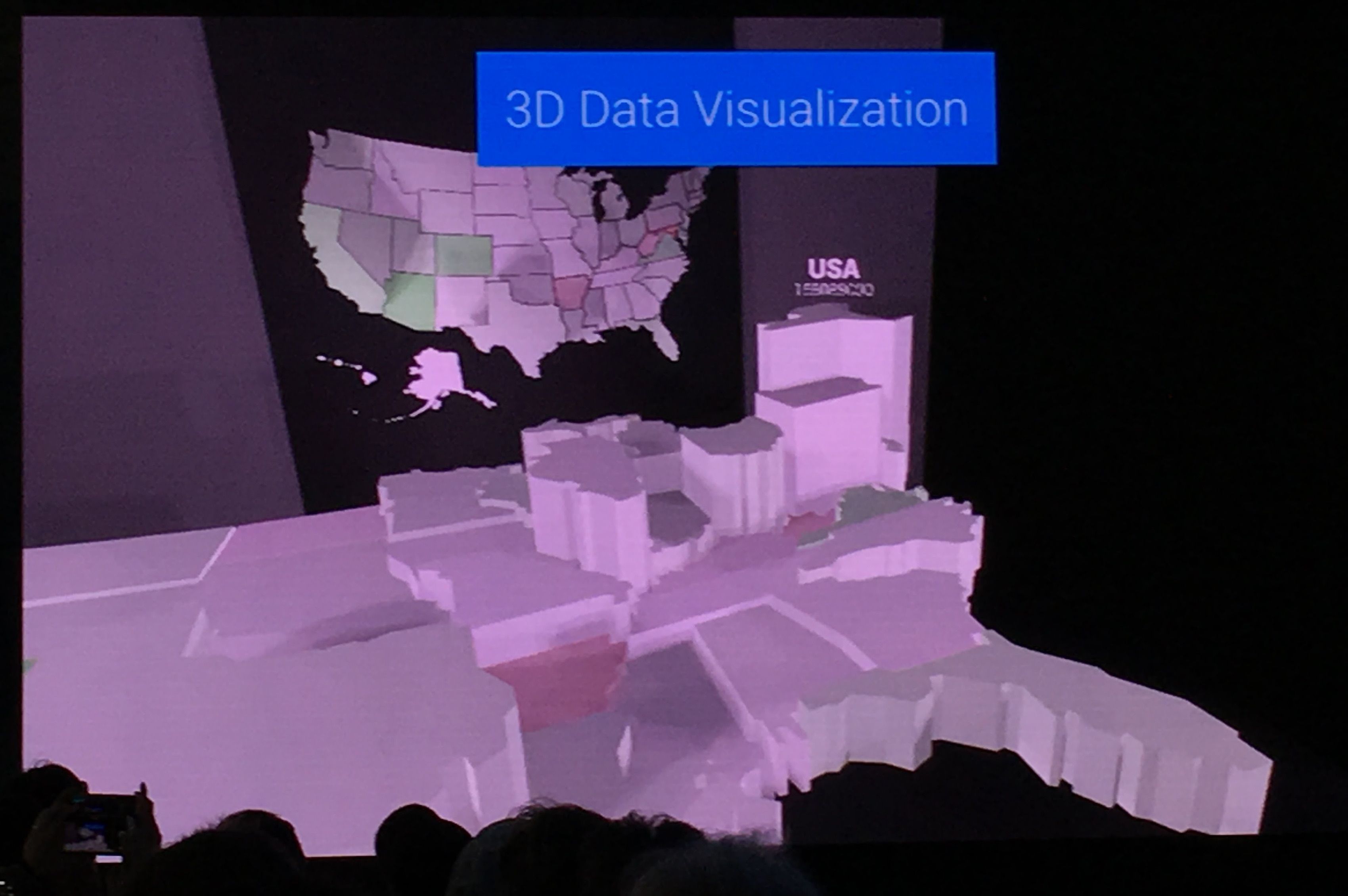 Above: Data visualization with Daydream.

Maybe you could even practice giving a speech in front of hundreds of people. 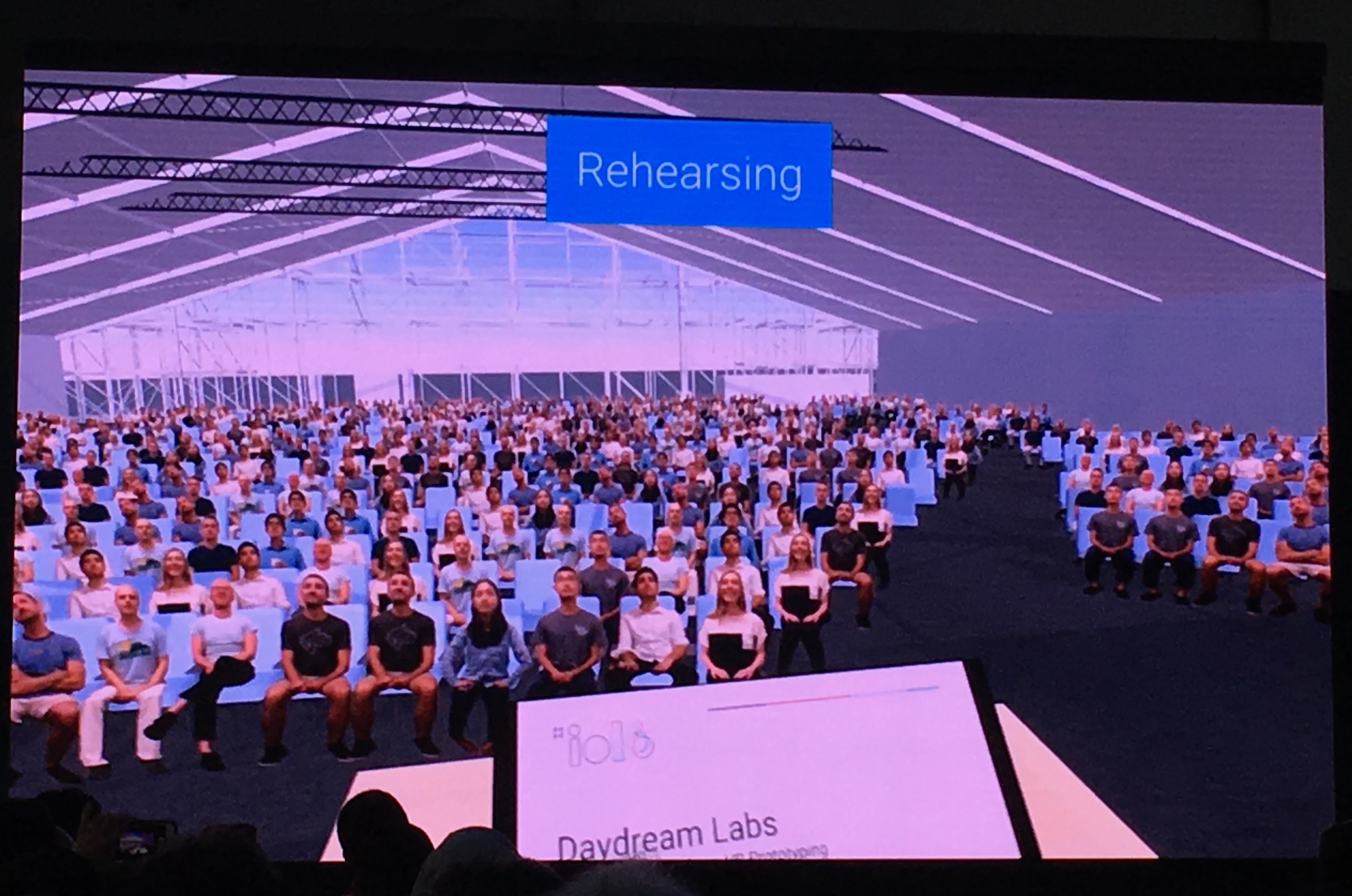 Above: Practicing a speech in Google Daydream.

Perhaps you could start learning how to read and speak a foreign language. 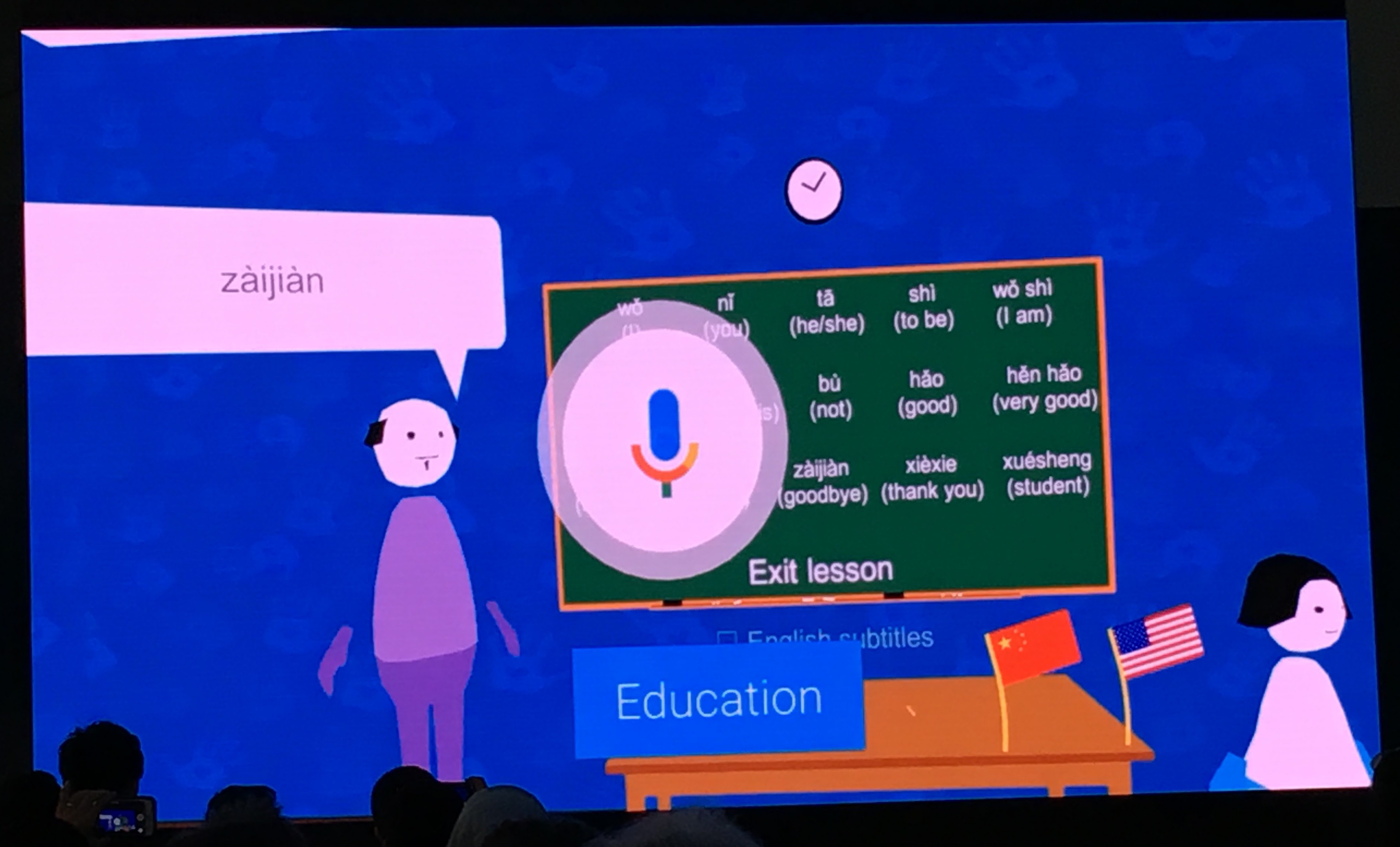 Above: Working on a foreign language in Google Daydream.

Other apps and partners have been promised. Keep in mind, the platform has just begun, and as developers build for it, much more will emerge.

To optimize application development and monetization for Daydream, Google has come up with a set of best practices.

Generally speaking, Google is encouraging developers to design apps and games for Daydream that will be longer and more extensive than what’s available for Cardboard. “Think a sit-down meal, not a snack,” Elbouchikhi said.

Apps need to run again and again without crashing, and they should maintain 60 frames per second (FPS) at all times on phones, said Faaborg. 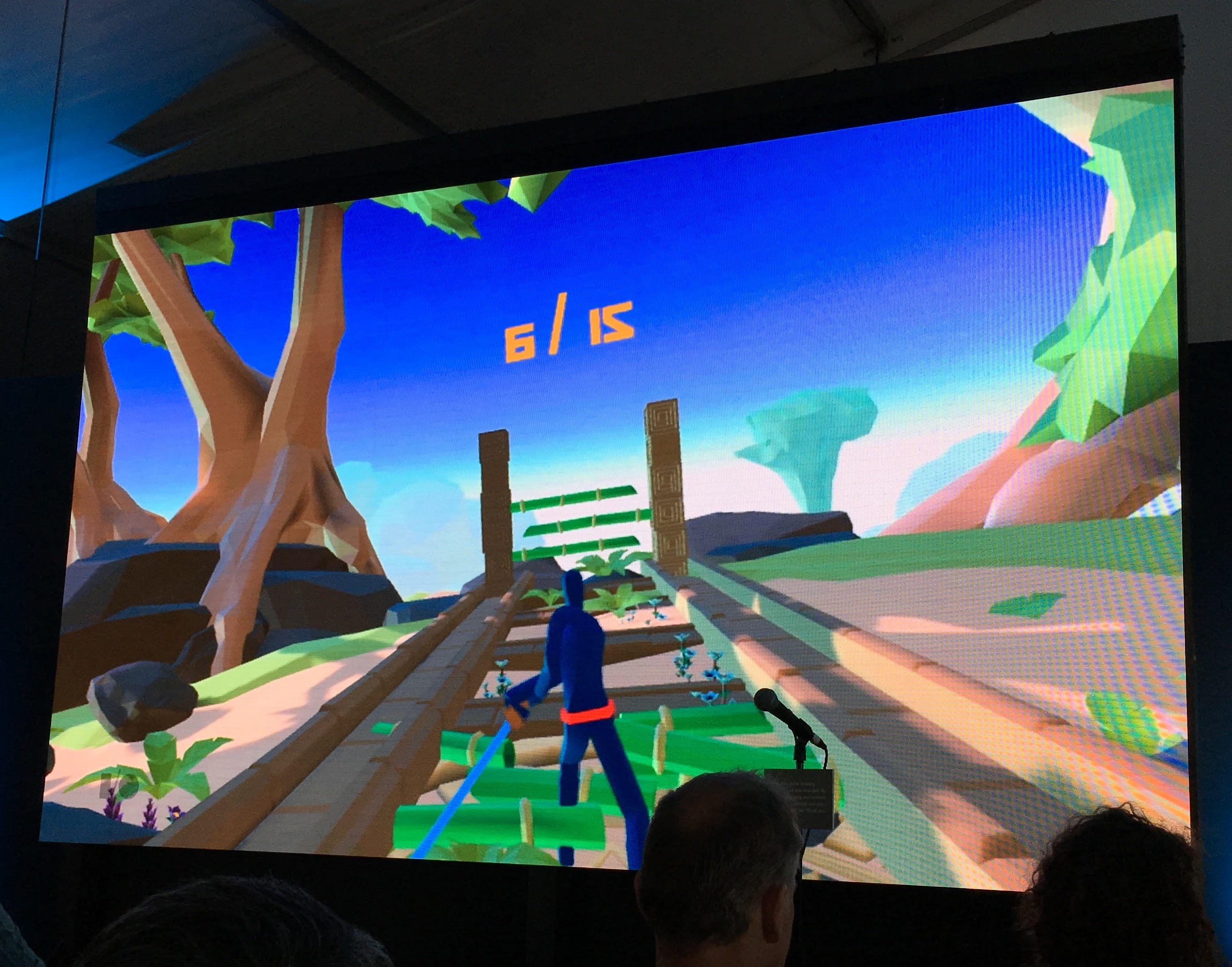 Above: A game involving a ninja that Schell Games developed for Google Daydream.

Developers would be smart to make sure their apps don’t accidentally display two-dimensional dialogues, like asking for access to contacts or the camera while users are in VR mode. Apps should stay in landscape mode the whole time — they shouldn’t be constantly switching between portrait and landscape, Faaborg advised. And they shouldn’t be showing system bars on the top and bottom of the display — apps should always be in full-screen mode.

Faaborg also doesn’t want developers to bring things too close to where a user’s eyes will be when using the headset. If you’ve spent some time in a VR headset, you’ve probably seen things get too close for comfort at least a few times, and you’ll be relieved to know Google wants to cut down on this occurrence with Daydream.

Google is advising developers to fade to black or any solid color whenever an app changes scenes. And the horizon line in an app should be stable. Also, the app shouldn’t jerk users around suddenly — there should be a clear way for a user to opt into any type of movement, like starting a roller coaster.

Apps need to do more with the Daydream controller than just click on stuff using the touchpad, Faaborg said. And apps must have the VR icon (it looks a lot like the YouTube icon). 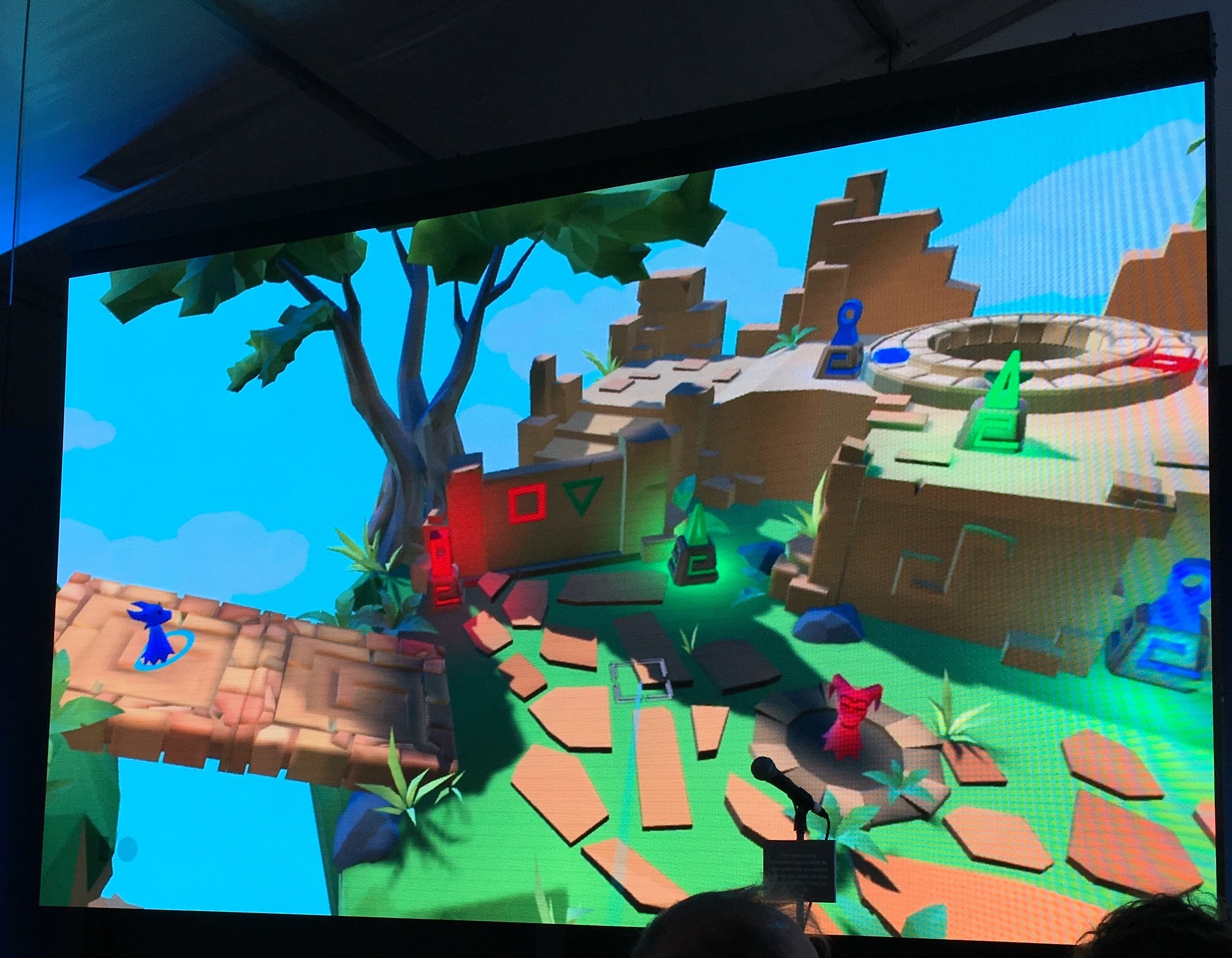 Above: A platformer for Google Daydream developed by Schell Games.

In order to look right in the Play Store, apps must have a 360-degree photo sphere screenshot. And they should honestly depict the content of the app. If an app is depicted as intended for meditation, for example, and the screenshot shows some beach chairs, it had better not have a zombie coming over to murder you with a chainsaw, Faaborg warned.

For end users, all these standards should be reassuring. Google won’t be letting crappy apps into the Daydream section of the Play Store.

And that means you can expect higher quality, on average, than what’s available for Cardboard.