Hundreds of people today lined up around the block of Apple’s new retail store in the tourist-heavy Union Square neighborhood in San Francisco in order to see the store for themselves on opening day. When the tall glass sliding doors finally opened just after 10 a.m., employees greeted customers by cheering, clapping their hands, and passing out commemorative postcards and T-shirts.

One thing that wasn’t included in the press release about the opening of the new store was the special guest who would be on hand: Apple fan favorite Jony Ive. The technology company’s chief design officer was mingling with people in the crowd on the second floor near the new Genius Grove.

More and more people noticed and got up close and shot pictures of him. And gradually he was escorted out to The Plaza, an outdoor gathering area that from here on out will be open 24 hours a day, with complimentary Wi-Fi. He took a look around, as security stopped more people from going through a door to join him outside.

Ive — who has had played a role in the development of MacBooks, iPhones, and iPads and who rarely makes public appearances these days — produced an iPhone and started snapping pictures of the outside of the store as onlookers snapped pictures of him from the other side of the glass. 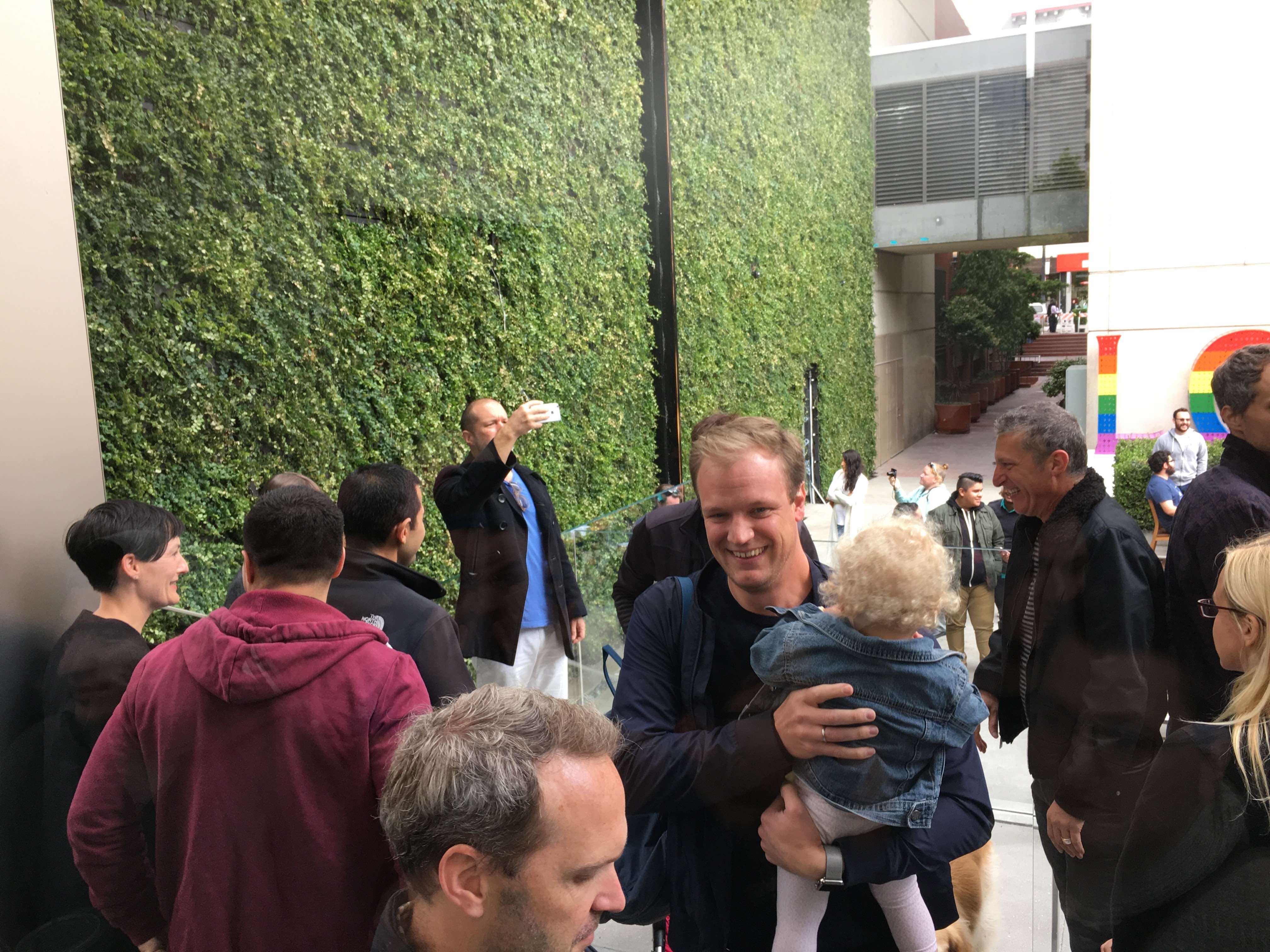 Above: Jony Ive takes a picture.

Ive reviewed pictures on his phone. 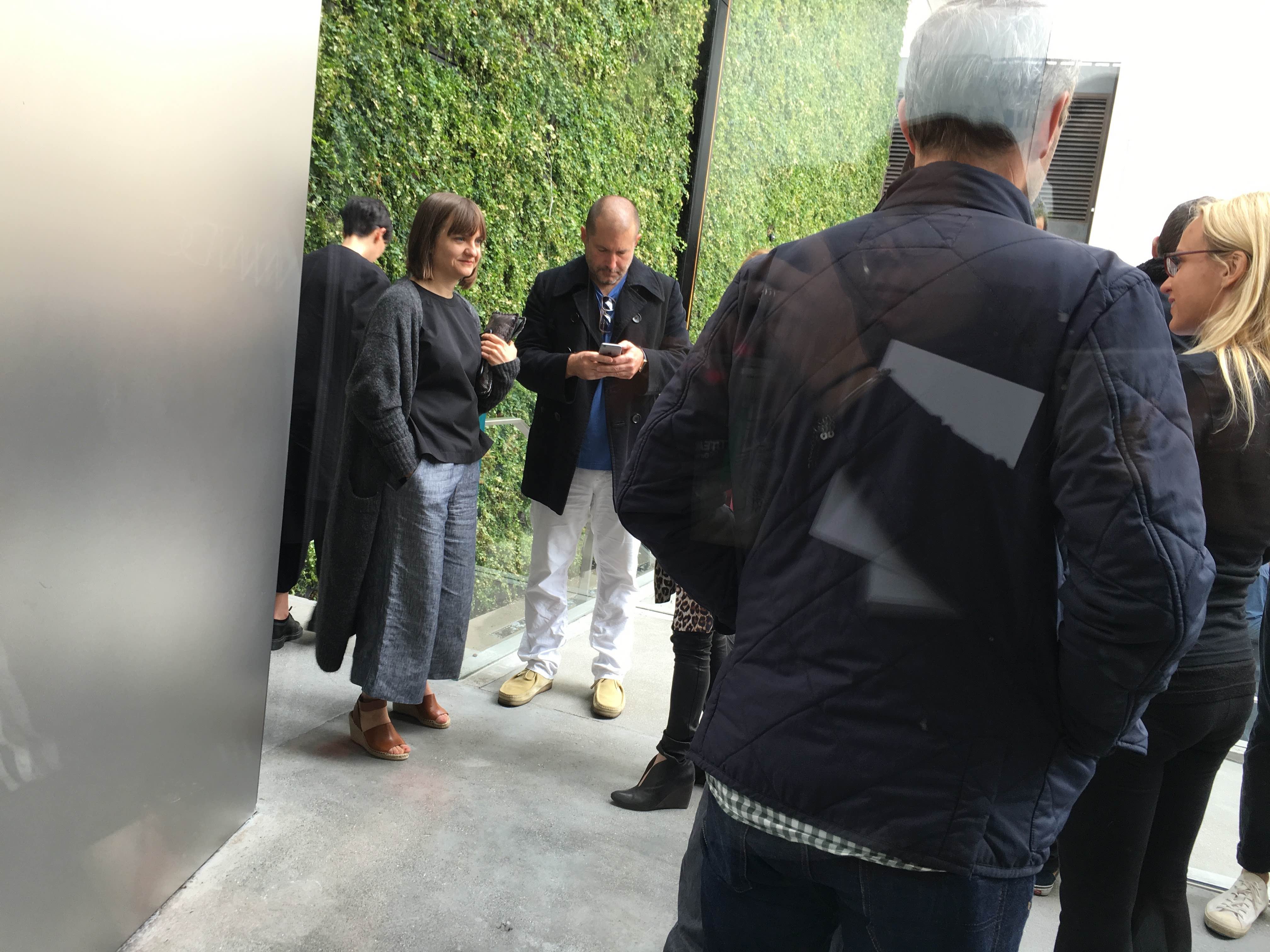 Above: Ive reviews his work.

Then he took a look up at the tall wall covered in plants behind him. And then he was gone, before the mob could form around him again.

Naturally, Angela Ahrendts, Apple’s senior vice president in charge of retail and online stores, was also on hand for the big day.

But Ahrendts did not attract as much attention as Ive, who joined Apple as a full-time employee in 1992. Apple cofounder and former CEO Steve Jobs famously called Ive his “spiritual partner.” So for Ive to visit the newest shrine to Apple devices meant something.

An Apple Store employee said that Tim Cook, Apple’s current chief executive, would possibly be making an appearance at the new store. It’s located just a few blocks from Apple’s original Stockton Street store, which opened in 2004 and is now closed.

The new store looks much more contemporary than the one it replaced. The existence of a section that will be open 24 hours a day with free Internet access is a great improvement, in itself. 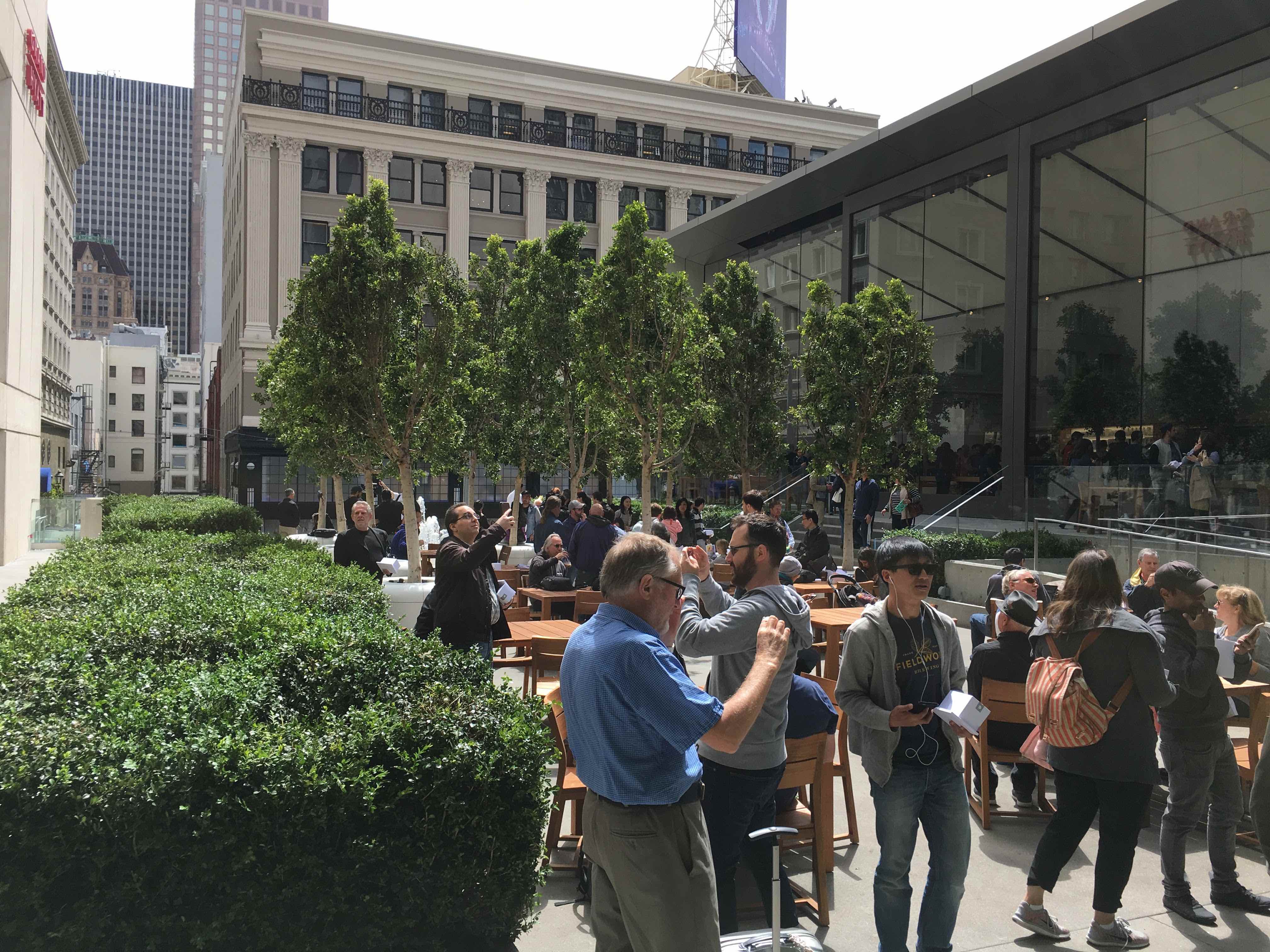 Above: The Plaza at the new Apple Store in San Francisco’s Union Square neighborhood.

And, generally speaking, everything feels more spacious and less cordoned off from the rest of the world, thanks especially to the large windows. One gets the sense that people will be able to walk around and get some good thinking done before committing to a purchase.

And if this type of new facility — the result of a collaboration between Ive and Foster + Partners — leads to more vigorous sales growth for Apple, then today is a very big day, and Ive will have once again done his job effectively. 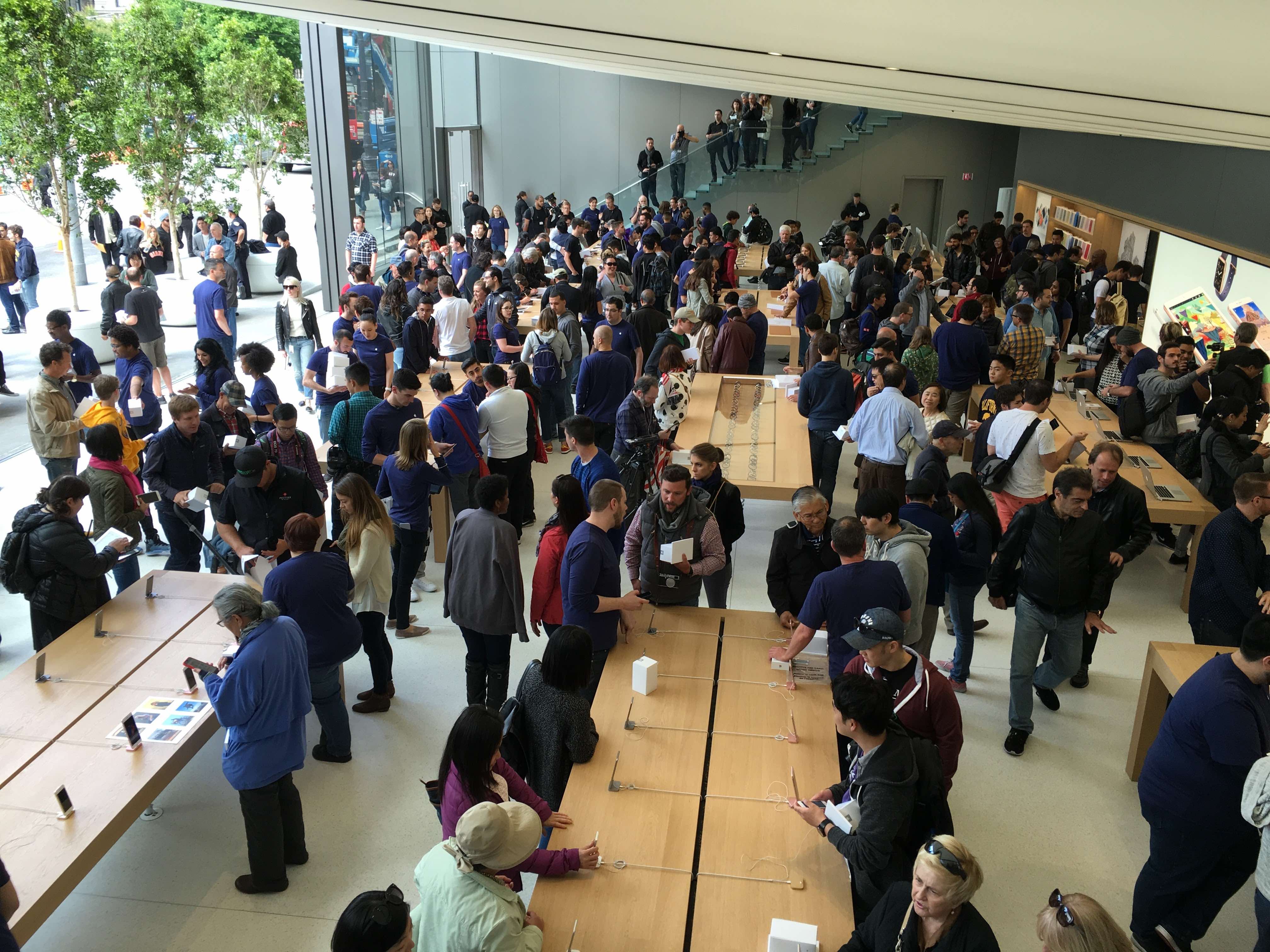 Above: Apple Union Square now has more than 150 employees working at the store, Apple says. 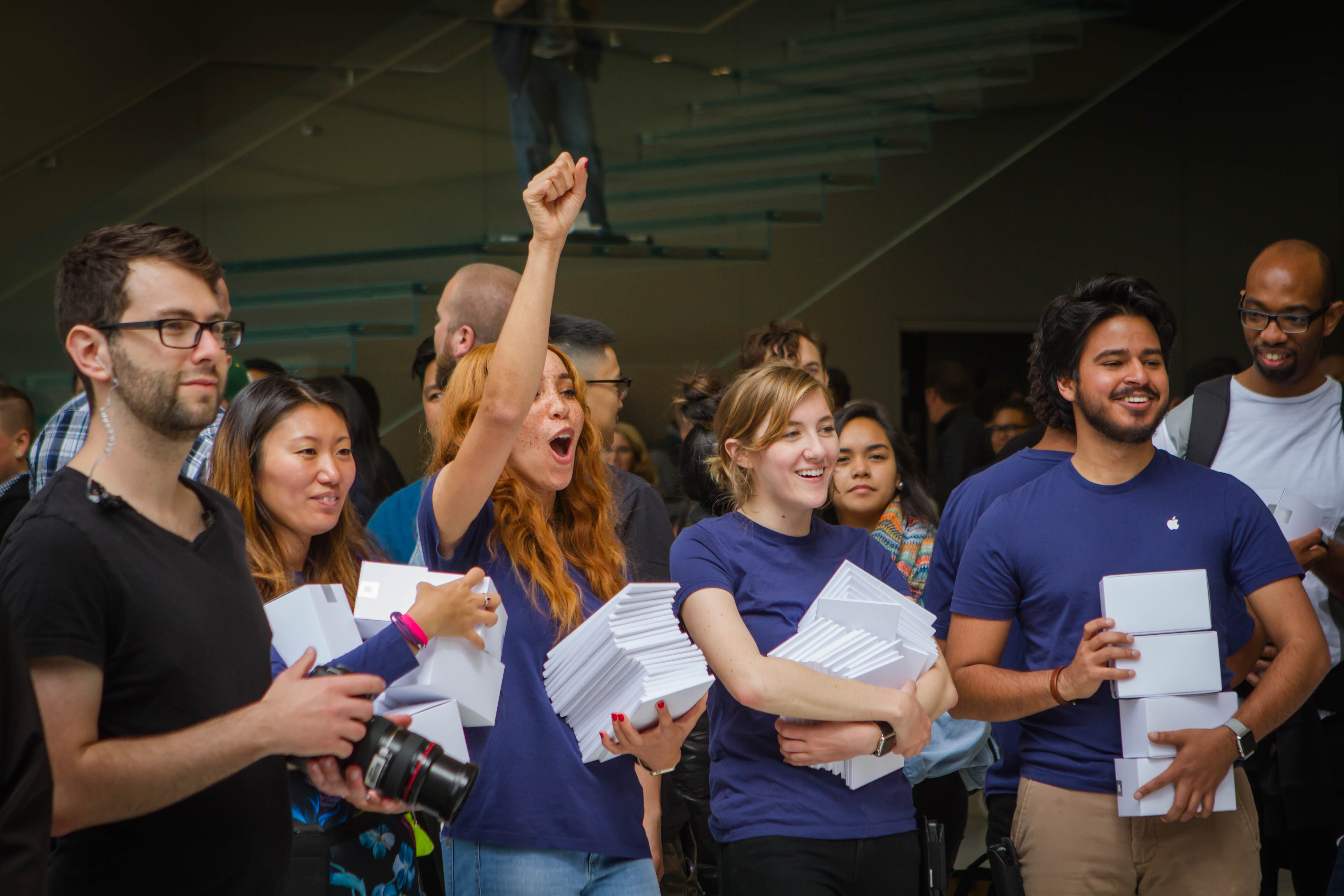 Above: Apple employees cheer as people enter the company’s new retail flagship store in San Francisco, Calif. on May 21, 2016. 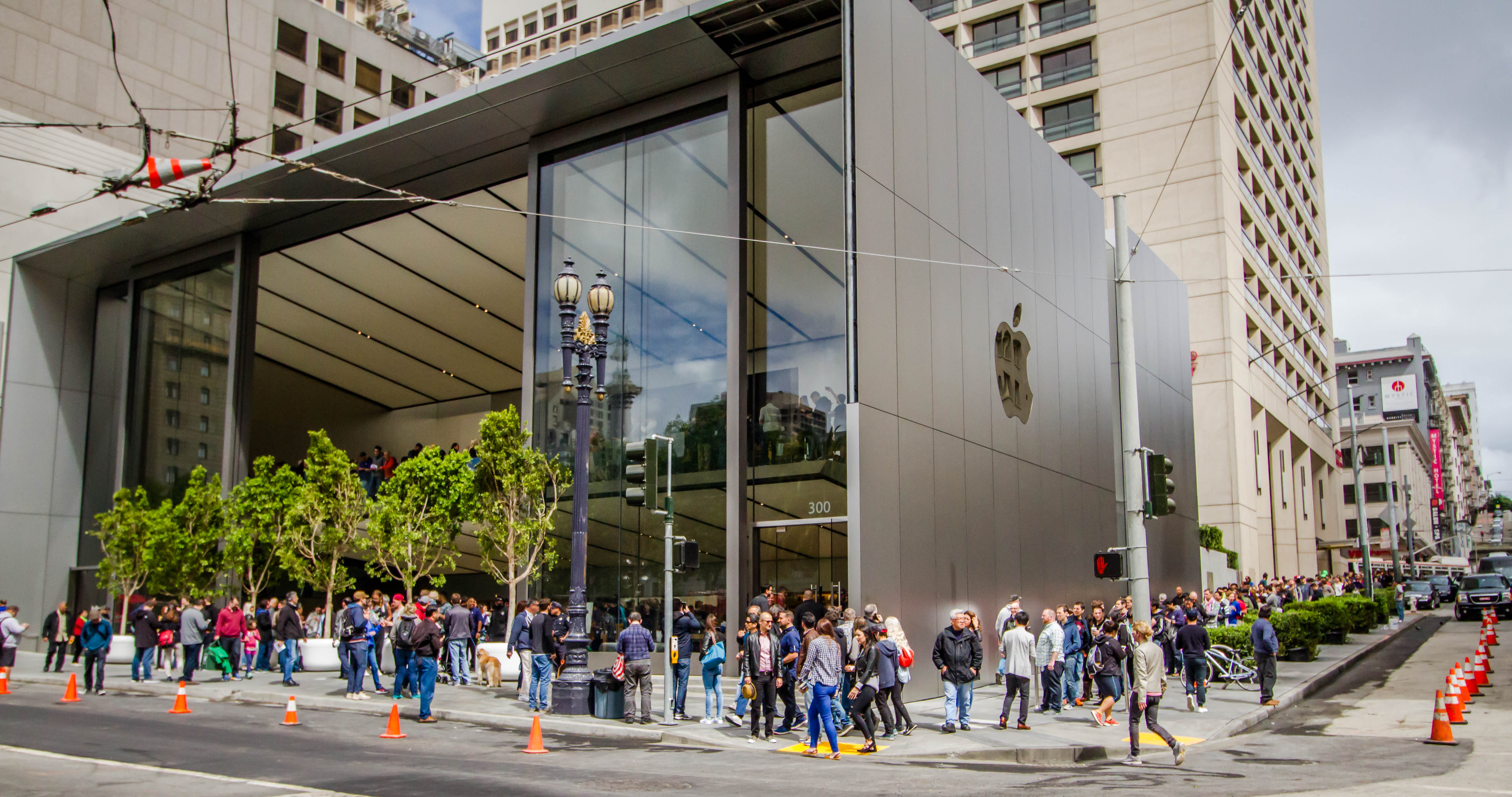 Above: Apple’s new flagship store opened to the public on May 21, 2016 in downtown San Francisco, Calif.