The big issue is, of course, FanDuel’s legal and legislative predicament in the States.

“I think what we’re seeing in the U.S. is that it’s moving from a nonregulated to a regulated market on a state-by-state basis,” said Eccles. “Starting this year there was only two states that had specific fantasy sports legislation, and that was Kansas and Maryland, but in the last four months we’ve seen another five states pass legislation. We’ve seen bills in maybe another 20 states. Our view, and the common view, is that fantasy sports has been around for fifty years, it’s clearly legal under federal and state law, but it’s now becoming a very big industry. So there’s legitimate consumer protection concerns.” 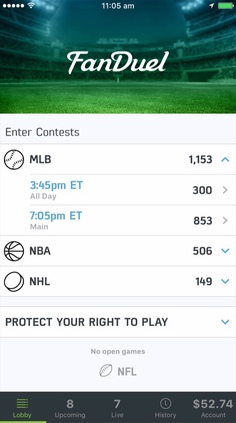 According to Eccles, the real underlying concern among lawmakers is player protection — whether player funds are being kept separate from operational funds and, ultimately, whether the games are being kept fair. The long-term impact of this legislative shift on companies such as FanDuel and DraftKings isn’t yet clear, but Eccles remains optimistic and says they are already doing much of what is being proposed.

“Some states will be making more taxes, some won’t be, but I think there will obviously be more of a regulatory compliance burden on us,” he said. “To be honest, a lot of these things we were already doing — separating player funds from operational funds is something we’ve done forever. Protection of players, keeping the games fair, things like that. But there are nuances in some laws, for example in Massachusetts they’re saying legal age to play is 21, while in others states like Virginia they say it’s 18.

“It’s going in the right direction; there are five states that have passed legislation this year. I can’t tell you if by the end of the year that will be 10 or 12 or 15 or more. I can’t tell you what it’ll be like next year, but you can see the direction of travel.”

FanDuel’s expansion plans extend beyond that of new market launches. In September, the company acquired esports startup AlphaDraft, news that emerged one day after DraftKings announced it was expanding into esports. The esports market is big business, expected to grow to $1.1 billion by 2019, and this hasn’t gone ignored by the big dogs of the tech world. Amazon acquired Twitch back in 2014, and Google is embracing the trend, too, with YouTube seeing 144 billion minutes of game videos each month. Even Yahoo has joined the esports frenzy.

It’s reported that esports will drive $325 million in sponsorship and advertising spending from brands in 2016 alone, and this is evidently one of the reasons why FanDuel is exploring this industry, especially when it’s so closely aligned with its current offering. “Esports is a hugely interesting category in its own right, it’s a game of skill itself, and AlphaDraft was a really nice way to tap into that,” said Eccles.

But this doesn’t mean esports will be shoehorned in alongside its usual daily fantasy sports offering — the plan is to keep them as separate brands and products. “It made sense to acquire and have a different platform,” added Eccles. “I think esports is continuing to evolve, so we’re keeping really close to that.”

Looking to the future, FanDuel faces some challenges for sure, but by expanding into new markets and categories, and working with legislators in its existing markets, it’s pushing hard to ensure it stands the test of time. The company is an unusual beast in many ways — not many Scottish startups receive VC funding, pivot a matter of months later, and go on to become a billion-dollar “unicorn” in the U.S.

So what is FanDuel? Is it a European, British, Scottish, or American startup?

“I don’t think of ourselves like that,” said Eccles. “I try to think about the common values that we share across the U.S. and U.K., the values of openness, collaboration, entrepreneurialism, risk-seeking … these are all things we aspire to.”