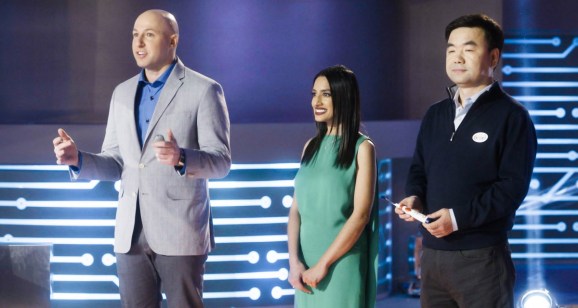 Grush, the maker of a gamified toothbrush for kids, won $1 million for the grand prize on the America’s Greatest Makers television show. The results were revealed moments ago on recorded television before a primetime audience.

The show was created by Intel, Shark Tank producer Mark Burnett, and TBS. It aired on primetime TV, and this evening was the final broadcast. All told, 24 teams competed for the grand prize of $1 million.

The show celebrates “makers,” the people who tinker with tech in their garages and build things that might turn into the next big thing. The show is a bit like Shark Tank, which is produced by show co-creator Mark Burnett, with a taste of American Idol. The show featured rotating celebrity judges such as sports legends Shaquille O’Neal and Kenny Smith, actress and neuroscientist Mayim Bialik, and Massimo Banzi, cofounder and CEO of Arduino. 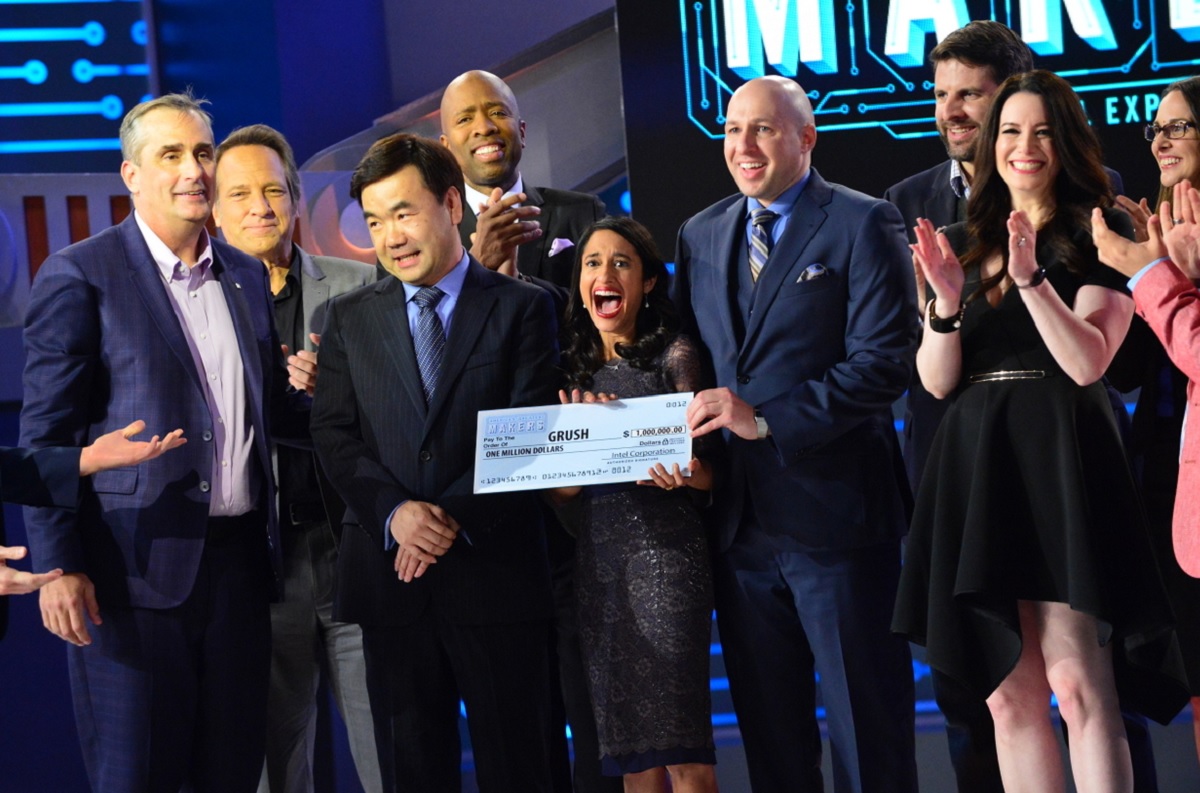 Above: The Grush team gets $1 million at the Intel-sponsored America’s Greatest Makers finale.

The show pitted 24 teams of makers from across the country. After the initial presentations in November, the judges whittled the field down to 15 competitors. Over five weeks, the teams faced off against each other, and only five remained for the final show. The founders of Santa Clara, Calif.-based Grush — Ethan Schur, Anubha Sacheti, and Yong-jing Wang — jumped for joy when they learned they won. The actually shot the show back in February, and they were sworn to secrecy until the episode aired.

“I thought, ‘Pinch me!’ Am I dreaming?” said Sacheti in an interview with VentureBeat. “I had to go back to our normal life like nothing had changed.”

Grush’s product is expected to debut later this year, said Schur. The point is to make brushing more fun for kids so they will brush longer. The Grush toothbrush connects via Bluetooth to your iOS or Android smartphone. It senses motion and position, so that it can detect which teeth have been brushed. It also translates that motion into a game that the kids can see on the smartphone. If they want to perform a motion that helps them succeed in the game, they have to keep brushing vigorously.

“This money is really going to help our company,” Schur said. “We are going to use it for tools, molds, firmware and other things for manufacturing. We will also use it for our Grush games and Grush cloud.”

Over time, the kids can build up rewards. Parents can log into the app and learn if one of the kids hasn’t brushed that morning. During one show, the judges such as Krzanich suggested that the team figure out how to apply the product to adults. So the team went off for a couple of weeks and figured out that the adults could look at an image of their teeth with dirt on it. They could brush away the dirt and become better brushers as a result. The judges asked for a floss attachment and the team produced it.

“Every suggestion the judges made had an impact,” Schur said.

Grush is creating original games such as Monster Chase and Toothy Castles. In Monster Chase, you brush away the bad guys hiding in your teeth. 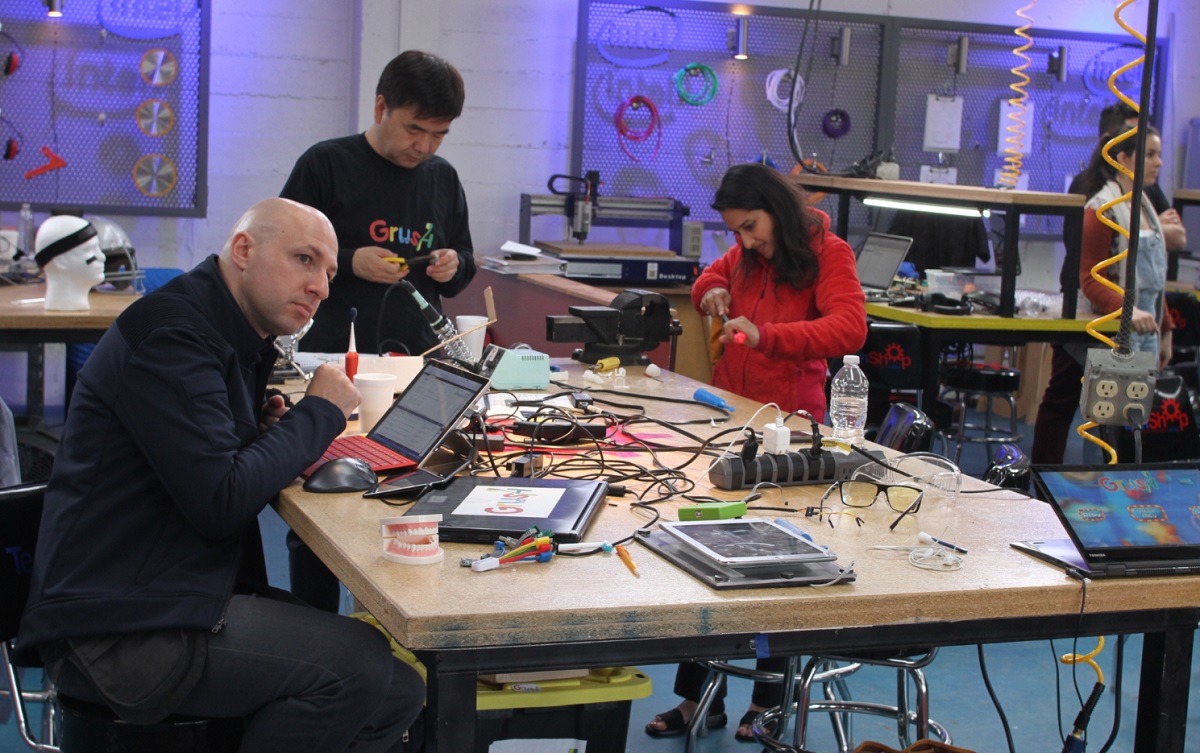 Sacheti said that she believed Grush won because of its solid team. It included the tech expert and inventor, Wang; Sacheti, the pediatric dentist; and Schur, a game expert.

Schur noted that VentureBeat wrote the initial story about Grush when most publications ignored it. So he thanked us, and I thought that was pretty cool. The company was founded in 2014, but Wang worked on the idea for many years before that.

The company now has more than 10 employees, and it is getting a lot of help from Intel as it ramps up the manufacturing. It raised about $800,000 beyond the $1 million prize, and Schur believes the company will raise some more money as it hits the market and designs its new products.

Grush has competitors, but Schur believes that the company has an advantage in technology, and he believes it has a more accurate detection of the brush and its movements.

“We are in a very strong position versus copycats,” Schur said.

Sacheti said the price will also matter. Grush is going to sell for about $60. In addition to winning the contest, Grush will now have a chance to go up on stage at the Consumer Electronics Show in 2017 and talk about their progress as Krzanich gives his traditional CES keynote speech.

Schur said that the team attended the recent Maker Faire in San Mateo, Calif., and young kids were asking for their autographs and begging their parents to order a smart toothbrush.

“It was so strange to see a child begging her parents to get her a toothbrush,” Schur said.