When it comes to children’s entertainment in China, Electronic Arts has one of the most popular brands.

Plants vs. Zombies is the second most-named play brand in China where it trails only PlayStation. In a presentation at the Casual Connect conference in Singapore last week, SVP Research analyst Michael Cai explained that Sony’s console is an aspirational brand in China, but it’s never had a huge presence in the country due to more than a decade of regulations. But Plants vs. Zombies, publisher EA’s cartoony strategy mobile, console, and PC game where players plant flora to fend off waves of the undead, is huge because it has a lot of players. At the same time, it hasn’t helped the company earn a significant amount of revenue from one of the largest markets in the $99.6 billion gaming industry.

This was an unaided study. The kids didn’t choose brands from a list. Instead, they had to name products from the top of their head. In the United States, this led to Nintendo at the top followed by the other consoles. Lego was No. 4, and Minecraft was No. 5. But in China, it was PlayStation, Plants vs. Zombies, and then World of Warcraft. 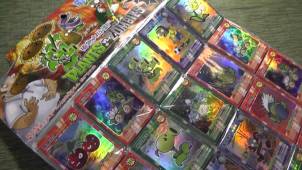 Above: It’s a craze.

The mobile market in China alone is around $5.5 billion, according to Niko Partners. That’s the fastest-growing sector of China’s total $26 billion gaming market. You would think that if EA has something more popular than World of Warcraft in country with that much money, the publisher is probably cashing massive checks. But, until recently, that wasn’t the case.

“EA didn’t really start monetizing very well because of piracy issues in the past,” said Cai. “If you go to China, every kid is playing with those [Plants vs. Zombies] playing cards, but EA is not seeing a penny of that money.”

The first version of Plants vs. Zombies was a premium-priced game for PC before hitting iOS and Android, and Cai says that no one in China paid for that version. EA did eventually release a free-to-play sequel on mobile called Plants vs. Zombies 2 with some aggressive microtransactions, and that has started to bring in some cash.

“Plants vs. Zombies 2 was hugely popular in China,” said Cai. “When EA launched the game, it even had some of the Chinese gamers wondering if EA was targeting them with the microtransactions because they spend so much more on in-app purchases.”

Even as EA figures out its gaming business in China, it has not pursued a similar effort when it comes to those Plants vs. Zombies toys, cards, and apparel.

“The merchandise is all counterfeit,” Cai told GamesBeat. “EA didn’t invest money in making its merchandise business work in China.”

The analyst said that it’s a misperception that Chinese consumers will never pay for authentic merchandise. The country has a growing community of collectors who want the real products, but they often don’t know where to go to find it.

“EA is starting to figure out Plants vs. Zombies,” said Cai. “But it is still leaving quite a bit of money on the table from merchandise and peripheral content.”