Overwatch has only been out for a day, but it feels like Blizzard has another big hit on its hands.

That’s because we’ve already had a lot of time to check the game out during its lengthy beta period. Still, even spending just a single day with the full release makes us happy that a company best known for strategy and role-playing experience decided to get into the online shooter scene.

Two of our writers, community manager Mike Minotti and reporter Jeffery Grubb, talk a bit about why Overwatch feels so special below. 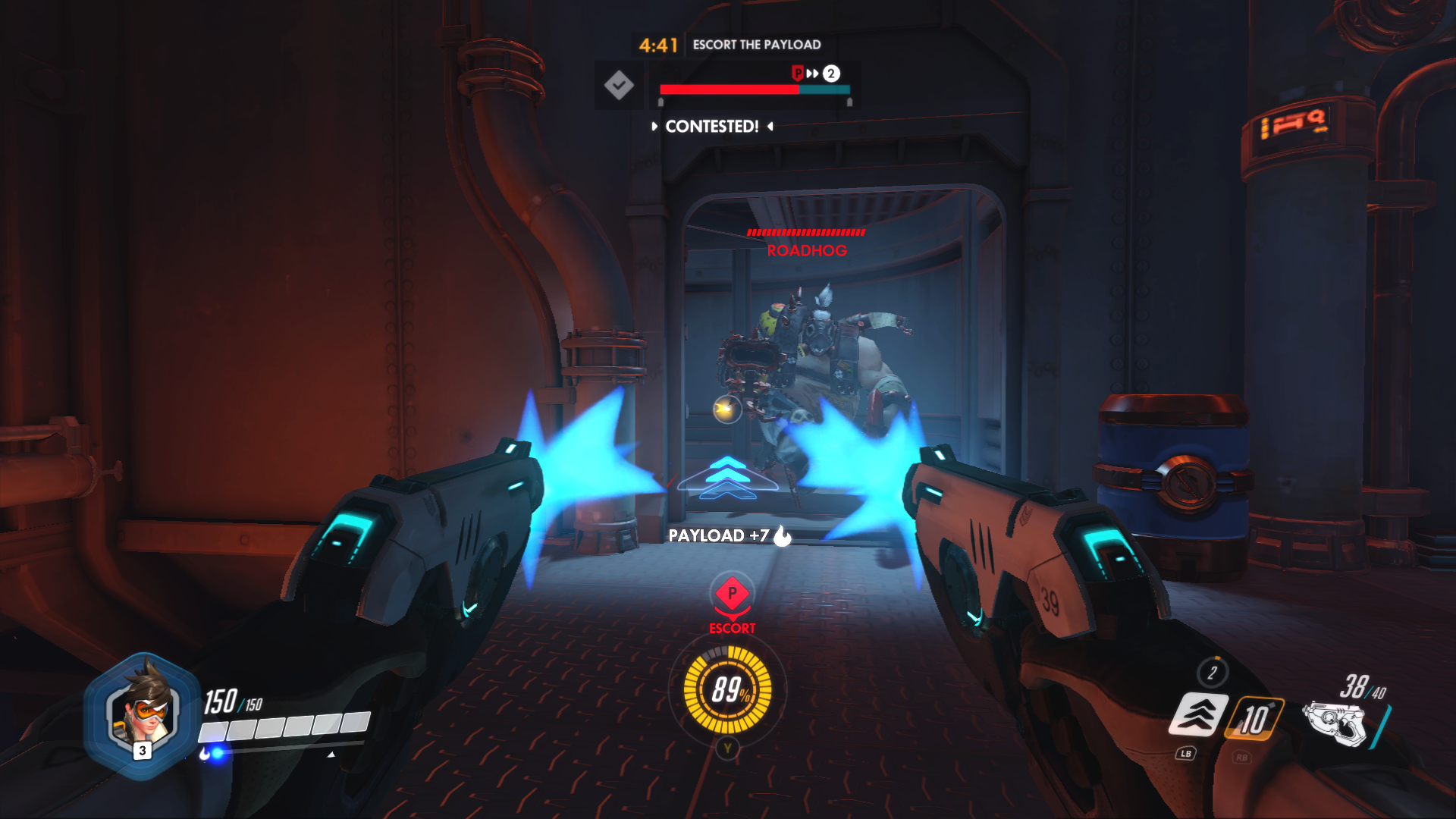 Above: Tracer loves her pistols.

Mike Minotti, GamesBeat community manager and writer: It’s kind of hard for me to think of Overwatch as a new game. I played so much of the beta. Like, to the point where I would normally tire myself out from something. I remember doing that with City of Heroes way back in 2003. I played so much of the beta that I was done when the actual game came out. I’m not having that problem with Overwatch at all. I played like five hours during that first day.

Jeffrey Grubb, GamesBeat reporter: Yeah, I was still thirsty as hell for Overwatch after the beta, but I was still curious if that would last once I had unfettered access to it. I think I’m over the hype, and now I can simply enjoy playing this supremely designed video game. I’ve never really had much experience with Blizzard games beyond Hearthstone. World of Warcraft was never my thing, and I never gave real-time strategy a chance, but I’m starting to see why so many people are nuts about this company after going from its card game to its shooter.

I’m only bummed because now I’m afraid I won’t finish Uncharted 4 or Doom.

Mike: I’ve been into a few Blizzard games, mostly World of Warcraft, the Diablos, and Hearthstone. I’ve always appreciated how, despite if they’re making a kind of game that’s your thing or not, the production values for their projects are always insane. Few games feel as slick or polished as a Blizzard production.

Overwatch is obviously a pretty game, but it’s not just about graphical fidelity. It’s the smaller, more impressive things, like how color composition and animation look, that impress. I could probably spend a whole a story just talking about the animation. All of it, plus the unique character designs and voice work, make all of the heroes stand out.

Jeff: Yeah, clearly Blizzard understands visual design in a way that I think most developers do not. They understand it in a way that I do not because I have no clue why I like the way Overwatch looks. Maybe it’s that the characters seem so fully realized. The artists know who these heroes are, and that comes across in every detail and animation.

I’m playing the game on PC, and it runs great on my desktop, but I also wanted to see how it would run on less powerful machine. I booted it up on a Razer Blade Stealth I’ve been testing, and the game ran fine on the integrated Intel graphics at its lowest settings. And I still loved the game’s aesthetic. I was still getting all the action and charisma despite it looking a bit like a PlayStation 1 game.

Above: Lucio, left, helping his team to hustle.

Mike: This is a game I can’t imagine playing on a console, and I’m usually OK playing shooters with a controller. I had no problem with Titanfall or Battlefront on Xbox One. I think it’s because Overwatch depends so much on movement. A lot of characters, especially flankers like Genji and Tracer, have to quickly turn around and keep enemies in their sights in order to be effective. It’s a lot easier to do that with a mouse than with an analog stick.

I don’t know if you played a lot of Team Fortress, but the Half-Life version (Team Fortress Classic) was one of the first online games I got into. While I liked Team Fortress 2, I never felt quite as enthusiastic about it. I think all of the unlockable weapons and character customization kind of put me off a bit. I felt like it added an unnecessary layer of complexity into the game.

I know you’re all about level-up shooters that have you unlock new equipment the more you play, but I like how (skill aside) everyone is always on the same playing field in Overwatch. They all have the same heroes with the same weapons and abilities.

Jeff: Yeah, I never felt like unlocking weapons should give players any kind of advantage, and they never really did in the best versions of those Call of Duty games. But you’re definitely right about Overwatch keeping everyone on the same plateau.

Blizzard has also figured out how to get players to understand the idea of switching heroes based on their circumstances. In a lot of shooters, you’ll get guys who are always going to snipe. No matter what. They’re just a sniper. They don’t care what else is happening. And while I’ve seen that in Overwatch a little bit with people “maining WidowMaker,” it’s not nearly as prevalent — at least through the first day and the beta.

As for playing on console, I tried it on Xbox One, and I think you’re completely wrong.

Blizzard tuned Overwatch specifically for inaccurate analog-stick play. The movement is a lot slower than most games, and if you aren’t great with thumb aiming, the bulk of roster has generous auto-aiming. Sure, Genji and Tracer are a bit tougher on a gamepad, but Xbox One and PlayStation 4 have no shortage of highly skilled shooter players, and I’m sure Blizzard is also turning up the auto aim for those characters a bit if you’re playing on one of those systems.

But I’m wondering how you think Overwatch will play out through the rest of the year. It clearly has a ton of buzz, and I think the PC crowd is going to turn this into the go-to shooter for a long time. I just don’t know if it will have the same legs as something like a Call of Duty, Battlefield, or Counter-Strike: Global Offensive.

Above: Winstoncan slowly burn enemies down with his lightning gun.

Mike: I haven’t tried a console version yet, so maybe I’d change my mind if I try it. I’m skeptical, though. Remember the console versions of Team Fortress 2? Those died a quick death. Of course, Valve also never supported those versions with DLC. But I assume they didn’t bother because the player base was small. I don’t think Overwatch will have that problem. Blizzard has been great about supporting its games and keeping them relevant long-term. A lot of people still play Diablo III and even World of Warcraft, which came out back in 2004. I think Overwatch will have a long, healthy life.

Do you have a favorite hero right now? I seem to do best with Pharah. She’s valuable to a team in almost every kind of scenario (attacking, defending, and king of the hill), and it’s a lot of fun to use her jetpack to fly around and shoot rockets down on unsuspecting enemies. Tracer’s also a lot of fun to play. Her whole teleporting/rewinding mechanics is so unique and fast-paced. I feel like they’ve done a great job making a varied, relatively balanced cast.

I say relatively only because it’s still kind of early. I don’t know what exploits people may find, but I think the lengthy beta testing helped them keep any of the heroes from feeling overpowered. I know newer players might get frustrated while they’re still learning (especially if, like you said, they refuse to change characters mid-game), but every hero seems to have a decent counter.

Although, I think it’s telling that Tracer is basically Overwatch’s mascot and the Prophet guy looks like an extra on Bablyon 5.

As for my favorite character, I’m torn. I have so many choices, so I feel like I should have a perfect match, but that’s not really the case. I have people I do well with: Symmetra, Lucio, and Hanzo. And I get the most kills with Solider: 76. But I also prefer the style of someone like Genji, and I want to learn how to use him. So instead of finding the perfect match, I find myself constantly unsatisfied with my current character.

And I think that should bring us into the final stretch of our illuminating insights about Overwatch: Do you have anything negative to say?

For me, my problem is my character situation. In loadout games, I’m also rarely satisfied with my build, but that’s part of the progression. I’m always unlocking things and maybe the next item will give me what I’m looking for. In Overwatch, that feeling is different because everything is unlocked, so as I’m bouncing between characters, I’m expecting something to click that hasn’t quite yet.

This isn’t a serious problem — or maybe it’s not a problem at all — because I’m still having fun, and I’m definitely learning characters and how to use them. But it’s also starting to grow a little frustrating thinking that I may not find the character that is perfect for how I want to play.

Above: Reinhardt, crusher of dreams.

Mike: It’s definitely different in that it’s not about finding that optimal composition. Titanfall or Call of Duty can be fun because you’re unlocking items and finding out which ones work best for the way you like to play. Overwatch is about learning all of these whacky, sometimes unorthodox characters, often despite not feeling comfortable with them at first. It’s not about saying, “I’m good with shotguns so I’ll play as Reaper or Roadhog.” You need to submerge yourself fully in the game and learn as much as you can: characters, level layouts, and all that.

I understand why that might be frustrating for some people, but I love it. I think it’s fun to jump into something this complex and just soak up as much information as possible. You become a lot better at Overwatch just by playing it. Not only because your mechanics improves, but small things make the difference: knowing where the health packs, knowing what other characters say when they’re using their ultimate abilities, and stuff like that. It’s not about getting frustrated by mistakes or deaths, but learning from them

To go back to your question, I don’t think there’s anything significant that I dislike about Overwatch. This is easily the most I’ve enjoyed a competitive shooter since (for me, anyway) the glory days of Half-Life mods. I’m all in with this game.

Jeff: I think you could’ve boiled down your response to “git gud.”