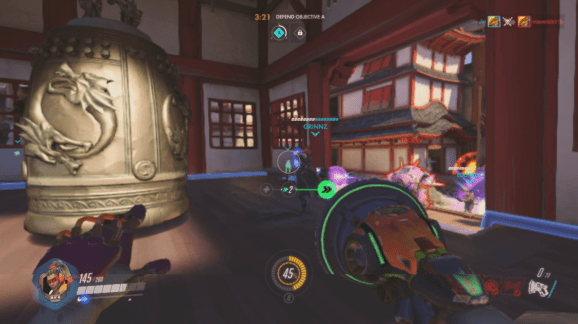 Overwatch's bright character is still obvious even at 720 lines of resolution and 30 frames per second.

Blizzard’s latest release is a fast-paced shooter with a lot of wonderful visual details, and it is totally something you could play on an older system or lightweight laptop.

Overwatch is a gorgeous shooter that still maintains its character when you boot it up on something like a Razer Blade Stealth that doesn’t have a dedicated graphics card. Running on a device like that on its lowest settings, Overwatch starts to look a little bit like a PlayStation 1 game with swimmy polygons and jagged edges, but that’s actually quite cool. In its minimum specs, Blizzard suggests that you have at least Intel HD Graphics 4400. That’s the integrated video processing Intel builds into many of the CPU chips that people can get in some of today’s cheapest laptops. I’m surprised that the game runs so well on those machines, but the two most incredible things are how great it looks and the fact that I can still keep up with the competition.

Blizzard has a ton of experience ensuring its games run well on older rigs. It put a ton of effort into ensuring as many people as possible can play World of Warcraft. Those lessons have carried over to Overwatch, and it’s clear that the company understands that art and design are just as important to making a great low-spec game as technical prowess.

You can tell that Blizzard makes all of its visual, sound, and mechanics decisions with the goal of building something playable. Everything is working toward the purpose, and I think the colors are an example of that.

Overwatch’s bright colors aren’t some random aesthetic choice. Having such a vibrant look means that Blizzard can define what various colors mean for you as the player. Take for instance that anything red is potentially dangerous or related to the enemy. That’s something I noticed when I played the game on my regular setup, but what I didn’t realize is that every opponent is always outlined with a bold red line as long as they are within your sight. This means that, even if they are 200 yards away, you can still make them out instantaneously.

As enemies get in closer, it’s still difficult to make out their details, but it’s easy to tell who you’re shooting at. That’s because every animation and sound effect is so distinct. You’re not going to mistake the lumbering movement of Winston for McCree’s deliberate gait. This isn’t something you have to think about. Your brain instantly processes all of these visual cues to fill in the picture. Again, that big red outline helps because it provides a red silhouette instead of a lumpy mess of shifting polygons.

Blizzard also has a million other tiny tricks that it’s using, but the point is that they all come together to make something that I know I could have fun playing on an ancient system. Now, I’m still trying to work a GeForce GTX 1080 into my budget, but that’s only because most other developers aren’t quite as talented as Blizzard at making new games that are playable on old PCs.