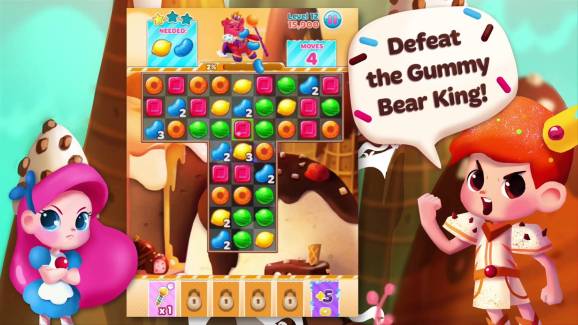 If you’re getting tired of match-3 games, maybe adding some live competition will earn back your interest.

Candy Blast Mania, a match-3 puzzle game for mobile devices, has added tournaments. Match-3 games are usually known more for single-player experiences, so this could help Candy Blast Mania stand out in the crowded field that includes hits like Candy Crush Saga. Candy Blast Mania is currently the No. 654 game on the iOS app store, according to App Annie. Candy Crush Saga, by comparison, is No. 29. A new feature like this can help bring in new players, which could make it a bigger hit in the $34.8 billion mobile games industry.

“The very first of its kind in the match-three genre, Puzzle Tournaments lets five gamers compete on the same puzzle simultaneously to win prizes,” developer Storm8 told GamesBeat. “During the 30-minute tournament, users play for the highest score and a spot on the global, friend and all-time leaderboards.”

Storm8 has also created a brand-based mobile games like Clue Bingo and Monopoly Bingo. Its other puzzle games include Polar Pop Mania and Bubble Mania. The company has hit a total of a billion downloads across all of its games.