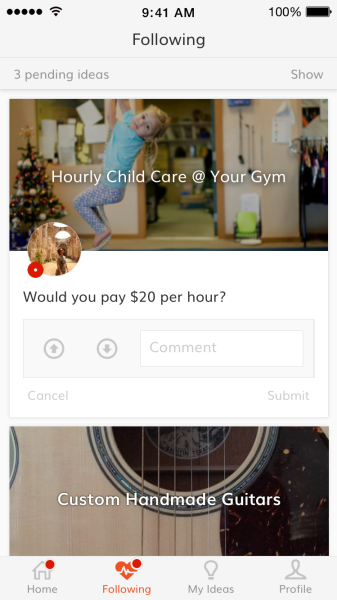 Flare, which launches on iOS today in North America followed by Android next month, invites anyone with a new business idea to submit concept overviews to a community and arrive at a general consensus on whether the idea has legs. It’s touted as a “cross between Shark Tank, LinkedIn, and Tinder” — users swipe right if they like a submitted idea, and swipe left if they don’t. If the idea gets enough positive traction initially, entrepreneurs can then solicit more specific feedback, so those who were warm to a business idea can click through to learn more and indicate whether they “love” an idea, follow its progress, and answer more questions.

While it’s clear what’s in this for the entrepreneur, what exactly is to be gained from those giving feedback? Well, it seems that GoDaddy hopes that the tried and tested practice of crowdsourcing will be enough to ensure the general public will wish to “become advisors to great ideas and play an active role throughout its journey,” according to a statement. In other words, for exactly the same reason that millions of people donate their time to editing Wikipedia articles or adding a new street in OpenStreetMap — people like to be helpful.

The social, community-driven approach not only lets experts in a given field impart their knowledge, but they can also pledge to become a future customer, which could prove to be the ultimate sign that the entrepreneur is sitting on a winning idea.

But this leads us to another question. Why would GoDaddy, a company synonymous with Internet domain registrations and hosting, seek to align itself with such an app? According to Rene Reinsberg, VP of emerging products at GoDaddy, people who are at the stage of purchasing new domain names and creating websites often want feedback on their fledgling business. A frequent question customers had when they called GoDaddy’s support team was “What do you think of my business idea?,” even though that wasn’t the kind of advice GoDaddy was set up to mete out.

“Everyone has ideas, but too often they don’t go anywhere,” said Reinsberg. “We created Flare because we recognized the need for a community where people can get impartial feedback on ideas and connect with others to help them turn those ideas into something meaningful. Whether you’ve just had a fleeting thought and want to explore where you might be able to take it, or you’ve been dreaming of creating your own business your whole life, Flare is the first place to go for someone who wants to take the next step.”

Flare isn’t GoDaddy’s first product not directly related to domain names. It also offers a bookkeeping service, the result of its 2012 acquisition of Outright, while it later acquired Ronin to integrate invoicing into this service too.

One final point worth noting on Flare is that it’s a mobile-only service, so you will not be able to access this on the Web. This follows a big trend we’re seeing of late, with services from tutoring and recruitment to messaging services focusing entirely on smartphones.