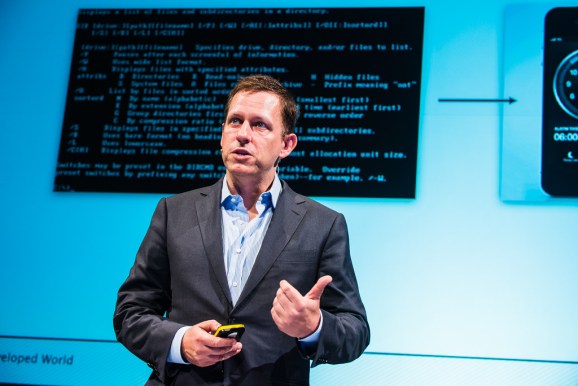 Nick Denton, founder of embattled media company Gawker, challenged his nemesis, billionaire Peter Thiel, to a debate on free speech, in light of disclosures that Thiel funded a $10 million libel suit by Hulk Hogan against Gawker.

This one-time sideshow is in the process of becoming the main act in Silicon Valley and pits the billionaire cofounder of PayPal against Gawker and its family of publications (such as Valleywag). At stake in the legal battle — in which Hogan, financed by Thiel, won a $140 million judgment against Gawker for publishing a private sex video — is the line between privacy and free speech. Get out your popcorn.

Denton pulled out his best fighting words in a lengthy blog post.

“Now you show yourself as a thin-skinned billionaire who, despite all the success and public recognition that a person could dream of, seethes over criticism and plots behind the scenes to tie up his opponents in litigation he can afford better than they,” Denton wrote.

After Forbes wrote a story saying that Thiel secretly funded Hogan’s lawsuit against Gawker, Thiel admitted to financing the litigation in an interview with the New York Times, in which he said that he wanted to deter the media from crossing the line. The New York Times has also reported that Gawker Media is exploring a possible sale.

“It’s less about revenge and more about specific deterrence,” Thiel said to the New York Times. “I saw Gawker pioneer a unique and incredibly damaging way of getting attention by bullying people even when there was no connection with the public interest.”

Denton listed a long litany of cases in which Gawker has uncovered embarrassing stories about Thiel and his friends, all in the name of “good journalism.”

Denton suggested that the fight would get uglier still in court. But then he suggested an alternative:

The best regulation for speech, in a free society, is more speech. We each claim to respect independent journalism, and liberty. We each have criticisms of the other’s methods and objectives. Now you have revealed yourself, let us have an open and public debate,” Denton wrote. “The court cases will proceed as long as you fund them. And I am sure the war of headlines will continue. But, even if we put down weapons just for a brief truce, let us have a more constructive exchange. We can hold the discussion in person with a moderator of your choosing, in front of an audience, under the auspices of the Committee to Protect Journalists, or in a written discussion on some neutral platform such as Medium. Just tell me where and when.