Flight search engine giant Skyscanner is the latest company to embrace automated customer support, with the launch of a new Facebook Messenger bot that lets users search for flights through conversational question and answers.

Available globally, in English only for now, it lets users enter destinations and receive live flight prices, though Skyscanner can also recommend destinations if the user isn’t quite sure where they want to go. You can type “anywhere,” for example, and Skyscanner will serve up some suggestions. 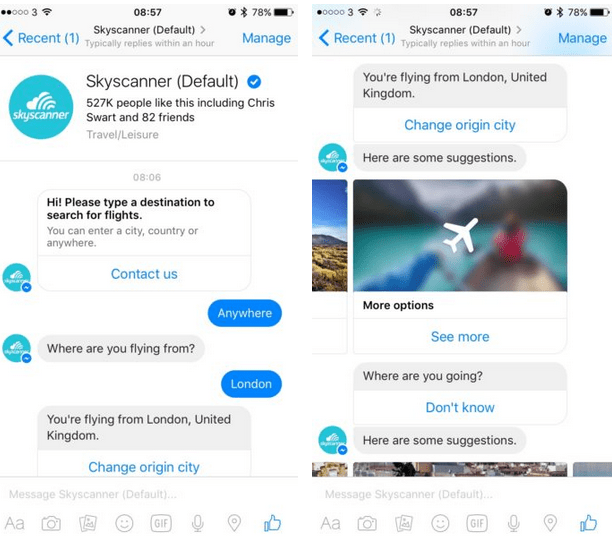 These suggestions are based on real-time search trends and the current cheapest pricing and mimic the existing “everywhere” feature in Skyscanner’s mobile and web apps.

The bot then displays scheduled flights and prices and provides a link to Skyscanner’s website to complete the booking. 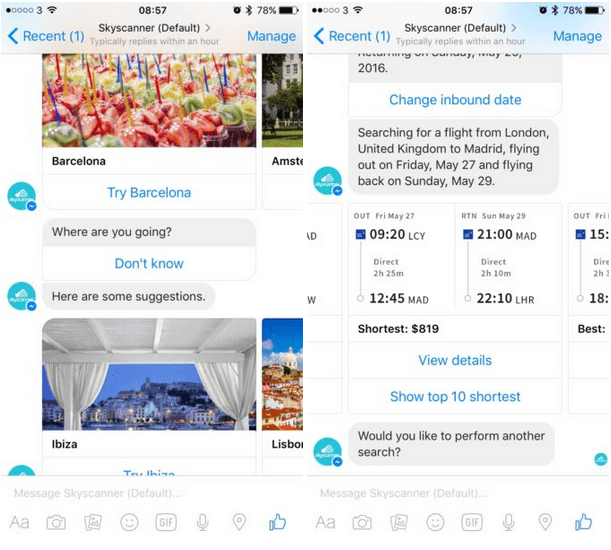 Founded out of Scotland in 2003, Skyscanner is Europe’s most popular flight search engine (by traffic), and the world’s second largest after Kayak. Though Skyscanner is better known for flight search, it has long branched out into other verticals, including hotel search and car hire. Following its gargantuan $192 million funding round back in January, the company reportedly gained the much-hyped “unicorn” status — describing a private company with a $1 billion+ valuation — and officially became one of Britain’s biggest consumer tech companies.

Moreover, Skyscanner is one of many tech companies to embrace the bot revolution, with the likes of Poncho, 1-800-Flowers, CNN, and Foursquare launching bots in recent months. In fact, if you don’t have a bot, it almost seems like you’re lagging behind a hot emerging trend.

“The messaging economy and conversational search are areas which we believe are incredibly important evolutionary features for the travel industry,” said Skyscanner director Filip Filipov. “It has been a top priority for us to take a pioneering approach when it comes to building a bot for the Messenger platform. We want to make travel search as easily accessible as possible and believe that the launch of our Messenger bot will allow more people to search for their travel in a fun and informative way.”