GamesBeat: Lots of studios have made two, three, four games, and their first one is still the best one. It’s hard to do consistent hits. I wonder what your thoughts are about that. You’re able to work on something for three or four years and commit to a huge project with all these commercial pressures that come up. How do you still manage to succeed on this higher level?

Druckmann: The easy answer is “lots of hard work.” [Laughter]

Druckmann: We’re in a fortunate position where, because of the track record we’ve had and the games we’ve done previously–we’ve drawn so much talent from all over the world and all across the industry. We have some of the most talented programmers, designers, writers, artists. We have an amazing team. I honestly believe no other team in the industry could have pulled off Uncharted 4, this version of Uncharted 4.

Druckmann: Maybe a different version, sure, but this version that looks like this, plays like this, resonates like this, I don’t think that would have been possible. And then the pressure is honoring that, knowing that the people around you are super talented, super passionate, and want to make the best game possible.

That makes everybody step up in a way that, from stories I hear, can be rare. Sometimes people can be checked out. “Oh, man, we’re doing another sequel. Here we go.” We’re in a fortunate position where, despite how successful our past games have been, this is the last one. We’re going to move on. That’s rare, to be in that position.

Druckmann: If we don’t get it in this one, that’s it.

Straley: Knowing that, with everybody in the studio and the talent there—I don’t know what drives all of us, what kind of crazy defect we have, what baggage we carry around that makes us do what we do. But collectively, in this studio, we’re all driven to make this the best we possibly can. Knowing it was the last upped the ante even more. This is our last chance. We have to make this amazing.

We all kinda killed ourselves a little bit in the process, but I think we’re all satisfied, because ultimately we can walk away knowing we created something collectively that resonates, and that we’re very proud of. We’re very proud of the team. I’m very proud of the work I put in so the team can be proud, and I know Neil feels the same way.

As far as success, the key is, one, we tried really hard to learn about story and apply that to games. But when we come up with something, a story, already there’s something there where we’re thinking about gameplay. We know that the experience can be interesting. We’re already invested in it. We already know, in our gut, that it feels great. There’s a feeling that we’re then in pursuit of for the next however long it takes to make the game. And all we can do is try to hang on to that feeling and go back to it. ”What are we doing? What are we after?”

Because the initial idea resonated, that’s all we can do. Just trust that and go with that. You can’t think about the industry. You can’t think about what else is out there. I know that sometimes – a lot of times – Neil and I will say to each other, when we talk about an idea, “I’ve never played that in a game before. That’s awesome. That sounds cool because I’ve never seen that, never played that, never done that.”

That feeling is also exciting. Not only are we invested in what we’re doing experientially and what we’re telling in the story, but we’re also creating these moments that we feel, as players, we would be excited to play, because we’ve never played anything like that before. 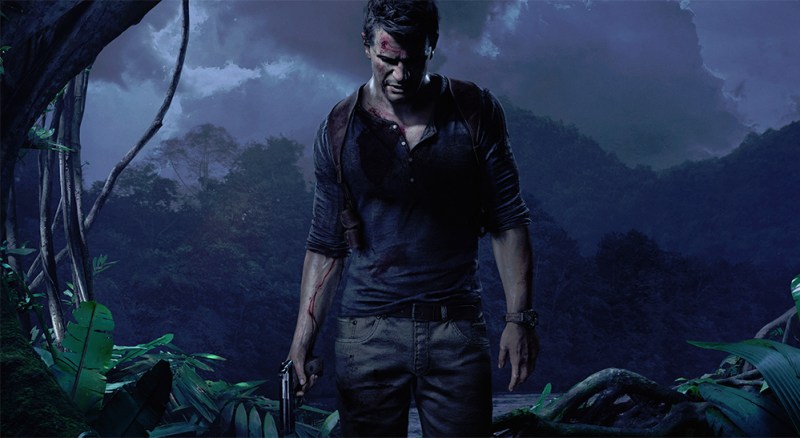 Above: Nathan Drake is sad he won’t get to entertain you this year, but he’ll be at E3.

Straley: For me, no.

Druckmann: Maybe for people thinking about business, or money. But no.

Straley: It’s a cool world. It’s a cool set of characters, cool opportunities for gameplay. We have a relationship with those characters and that world. I’m glad there’s closure. But there is something in the back of my mind—there are still more ideas that could be generated for a type of set piece or a combat scenario or a moment in those characters’ adventures. But just like when we’re creating things, not every idea makes it. You use that energy for something else.

Druckmann: That’s why, in a lot of ways, Uncharted 4 was a love letter to the franchise. But also in a way a love letter to Naughty Dog, if you think about all the stuff we put in there, the nods to Crash Bandicoot and so on. When I started at Naughty Dog, one of my first memories was seeing Bruce at a programmers’ desk with an early version of a PS3, this character running around, and someone telling me, “That’s going to be our PS3 title.” My memories of Naughty Dog are all part of the Uncharted franchise.

GamesBeat: Do you have a sense of loss, then, letting go of Uncharted?

Druckmann: It’s bittersweet. The fact that it came out, though, and that it resonated with so many people—they got what we were trying to do. Because you never know. We’re part of the game. It’s the game we want to play. But you never know what the industry’s taste is, what players are into now. If it’s not open-world—who knows? Maybe they’re not going to be into it. So the fact that it was satisfying to so many people, it feels satisfying to us. Okay. We left this in a good spot.

Druckmann: Maybe if it really sucked, we’d want to do one more.

GamesBeat: Are you excited about whatever else you’re on to next?

Above: Nadine in Uncharted 4