I am feeling a bit like the DeanBeast today. While my younger colleagues are busy playing Overwatch, I’ve been reliving my past. Shooting demons. Blowing things up.

We see a lot of “bullet hell” games these days, many with 8-bit graphics. But Doom was the original first-person shooter horror game that gave me nightmares when it came out in 1993. That old Doom made me woozy with its fast movement, but I played it anyway. And I learned to fear the demons shooting fireballs out of the dark. Now I’ve finally finished Doom, the remake that debuted earlier this month from Bethesda’s id Software division.

We had to wait a long time for this Doom, and we almost didn’t get it at all. Once upon a time, this game was called Doom 4. The last title in the series, Doom 3, came out in 2004. The work on Doom 4 started around 2007, but the id Software team struggled with that project. In 2009, ZeniMax Media, owner of Bethesda Softworks, bought id Software. The project had a lot of turnover, and id cofounder John Carmack left id to go work on virtual reality at Oculus VR.

The project got a serious reboot in 2011, and was finally revealed as Doom at an event in 2014. I’m glad to say that it was worth the wait. This Doom, which finally came out on May 13 on the consoles and the PC, is a perfect title for those who are nostalgic for some good, old-fashioned shooting mayhem. 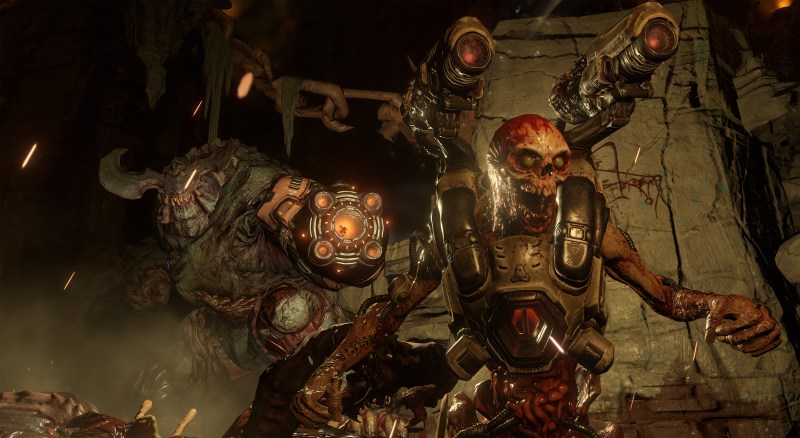 The single-player campaign is perhaps one of the hardest games I have ever played. That, and my extra-heavy travel schedule, is why I’m weighing in on this game so late. I don’t want to see this one get lost in the rush of titles coming soon.

It is really hard to say this game is innovative, but it does feel and play different from all the other id Software shooters I’ve played. It’s another revival of a classic shooter game, only prettier and harder than the original. I think it bears more resemblance to the difficult combat of Wolfenstein: The New Order. That game from 2014 was ridiculously hard, with battles that I had to fight perhaps 30 times in order to win. The new Doom has ultimate boss levels that are just as hard as Wolfenstein’s boss levels. And Doom is also consistently difficult to play, even on the lower levels.

The game is once again set on a station on the planet Mars, where researchers have opened up a portal to Hell. Demons have poured forth and wiped out the colony, and your job as the lone remaining space marine from United Aerospace Corp is to fight like hell to stop the demon invasion. In past titles, you didn’t get much more story than that.

But this Doom had a lot more of a story that the previous titles. The Mars facility director is Samuel Hayden, a genius who transferred his consciousness into a giant robot after he was diagnosed with brain cancer. The UAC tried to channel the energy from Hell into a renewable power source called Argent energy, in order to solve Earth’s energy crisis. But one of the researchers, a gangly woman named Olivia Pierce, goes overboard. As a cultist, she purposely unleashes the demonic armies. You spend much of the time mopping up all those armies and chasing Olivia. You can see some of the story unfold by watching computer-animation-like sequences that show what happened between Hayden and Pierce. And then you finally catch up with them.

I loved the gameplay with the Xbox One version. I had to pull triggers and press buttons to stay alive. The game’s level designers were cruel, putting plenty of difficult puzzles into some of the maze-like environments. The levels are huge, giving you lots of room to run away from the enemies and set traps for them. I had to search far and wide for health and ammo. I loved collecting the different weapons and leveling them up with the weapon point rewards that were randomly sprinkled throughout the levels. 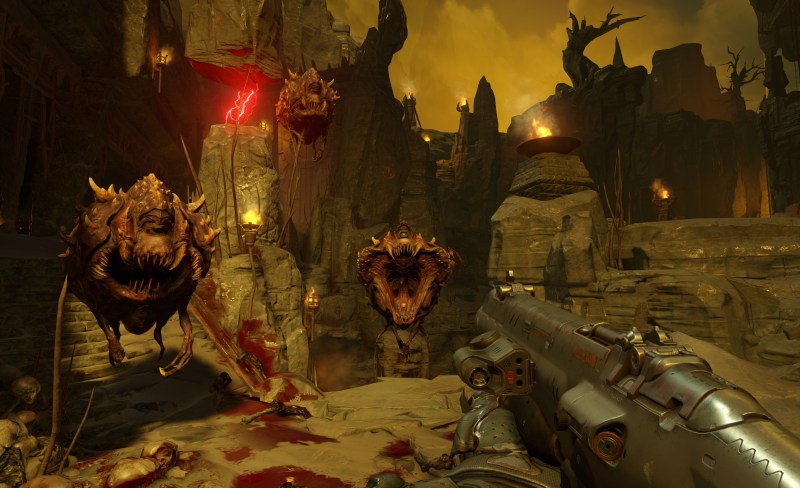 The combat is very satisfying, particularly when you get into close range and blow the enemies to giblets (chunks of bloody parts). You could hit the zombie-like space marines once and stun them. Then you could dismember them with your next blow, without wasting ammo.

I really came to hate the different demons. The Hell Knights were tremendously strong, fast, and jumped really high so they could land on top of me. I had to time my shotgun or rocket fire just right to keep them reeling. The Cacodemons were these hateful flying demons that took multiple rocket shots to bring down. But they packed a really powerful head-on attack. The Mancubus was a horribly large monster with flamethrowers for arms. It took a lot of running and firing with rockets to take down just one of them. And the Barons of Hell would just stomp me dead if they ever caught up with me.

You can take on each one of these demons with a special weapon. The heavy assault rifle works great with the flame-throwing demons. The shotgun was great for taking out the bigger enemies. I liked the fact that each weapon had attachments that could add new capabilities like stun guns or missiles. The challenge is that in many of the levels, you see many different types of creatures. You have to strategically think about taking out certain fast demons first and then concentrate your fire on the tank-like demons at the end.

When I reached the highest level, I was delighted to find a BFG9000 (it stands for big f***ing gun). This gun only has three shots, but it can wipe out everything on a level within sight of the gun. It was deliciously satisfying to take out multiple Mancubi and everything else annoying me with a single shot. But you have to be very careful with the ammo and make every shot count. The heavy metal rock music that accompanies the action really makes you feel the adrenaline, and after you finish killing the demons, you feel sweaty and shaky. It’s a hell of  rush.

The single-player campaign lasts quite a while if you plan on the difficulty level. Just as I was really feeling great about shooting demons with a great deal of skill, I tried multiplayer and was horrible. I really would love to have a BFG9000 to wipe out everybody in multiplayer at once, but that doesn’t seem likely to happen anytime soon. Still, after you’re done with this long and hard single-player campaign, you’ll be able to enjoy this game for quite a while in multiplayer.

This Doom is a lot better than the dark and moody Doom 3. And I was impressed with the fact that it had a story. But having just played Uncharted 4: A Thief’s End, I have to say that story is a pretty thin blue line between the player’s conscious ego and the chaos of the id.

If I were doing the official review, I would rate this Doom at about 90 out of 100. Yes, that’s the same score that Mike Minotti gave Doom in his official review. Once in a while he gets it right. Sadly, Doom doesn’t have the best timing. I wish that Bethesda had seeded copies of the game earlier to reviewers. I hope to play a little more multiplayer before I have to go check out this young turk, Overwatch, from Blizzard. I’m going to stick around memory lane for a bit longer, even if it is hell. 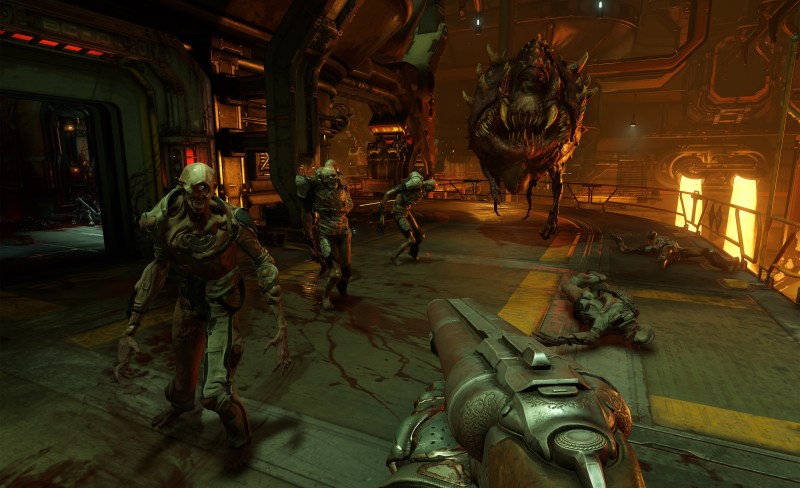