If it seems like the 18 hours of gameplay for Uncharted 4: A Thief’s End and some of the scenes, like the epilogue, lingered for you as a gamer, there’s a reason for it. Naughty Dog’s co-directors, Bruce Straley and Neil Druckmann, had a hard time letting go of the franchise. When they took over development a few years ago, the first decision they made was that this would be the last Uncharted game out of four main console titles.

That was a momentous decision, and it drove a lot of the thinking behind the theme of the game, the parallel plot with the pirates, and the ultimate ending. I sat down with Straley and Druckmann at Naughty Dog’s headquarters in a wide-ranging interview. One of the things we talked about was letting go. Here’s what they had to say. 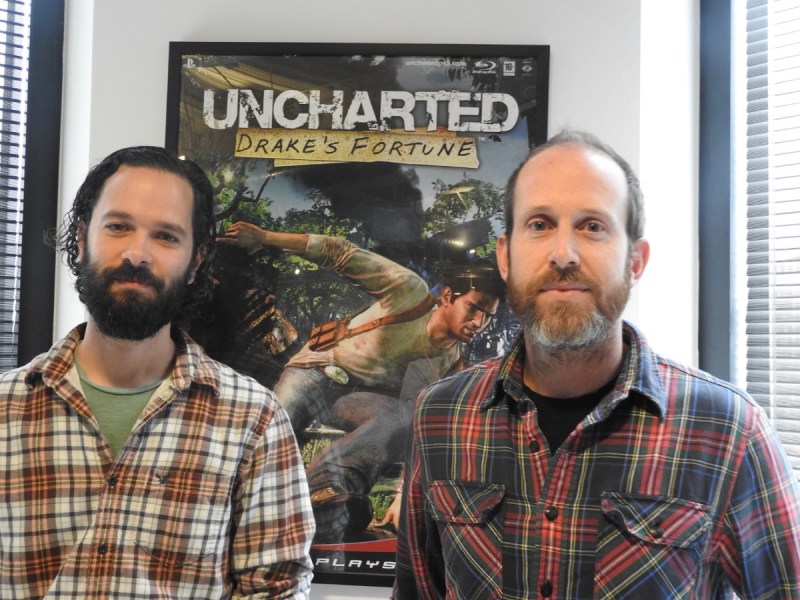 Above: Neil Druckmann and Bruce Straley, the co-directors of Naughty Dog’s Uncharted 4: A Thief’s End.

Straley: For me, no.

Druckmann: Maybe for people thinking about business or money. But no.

Straley: It’s a cool world. It’s a cool set of characters, cool opportunities for gameplay. We have a relationship with those characters and that world. I’m glad there’s closure. But there is something in the back of my mind. There are still more ideas that could be generated for a type of set piece or a combat scenario or a moment in those characters’ adventures. But just like when we’re creating things, not every idea makes it. You use that energy for something else.

Druckmann: That’s why, in a lot of ways, Uncharted 4 was a love letter to the franchise. But also in a way a love letter to Naughty Dog if you think about all the stuff we put in there, the nods to Crash Bandicoot and so on. When I started at Naughty Dog, one of my first memories was seeing Bruce at a programmers’ desk with an early version of a [PlayStation 3], this character running around, and someone telling me, “That’s going to be our PS3 title.” My memories of Naughty Dog are all part of the Uncharted franchise.

GamesBeat: Do you have a sense of loss, then, letting go of Uncharted?

Druckmann: It’s bittersweet. The fact that it came out, though, and that it resonated with so many people — they got what we were trying to do. Because you never know. We’re part of the game. It’s the game we want to play. But you never know what the industry’s taste is, what players are into now. If it’s not open world, who knows? Maybe they’re not going to be into it. So the fact that it was satisfying to so many people, it feels satisfying to us. OK. We left this in a good spot.

Druckmann: Maybe if it really sucked, we’d want to do one more.

GamesBeat: Are you excited about whatever else you’re on to next?

Above: Uncharted 4: A Thief’s End is the latest entry in Naughty Dog’s popular action-adventure series.