As we outlined in our previous post in April, Nintendo’s first mobile app, Miitomo, debuted and quickly shot to the No. 1 rank on both the iOS and Android app stores. The big question is how has the game fared over time? Over a month has passed since its launch, so let’s take a look.

The benchmark: King and Supercell

King, the maker of Candy Crush Saga, and Supercell, the maker of Clash of Clans, are two of the world’s top mobile game developers. Both are best in class when it comes product launches. We were curious to see how Nintendo would stack up against the mobile veterans, so we pulled data from SurveyMonkey Intelligence comparing Miitomo to Candy Crush Jelly Saga and Clash Royale, the two latest titles from King and Supercell.

Miitomo’s download performance was strong, possibly due to brand

When comparing to Candy Crush Jelly Saga and Clash Royale, Miitomo’s download performance is right on par. It had a top 5 download ranking for its first week after launch, peaking at No. 1 on both platforms. Miitomo did fall off the charts more rapidly than the others, but Supercell and King both likely spent more on advertising to help sustain their download volumes.

Metrics indicate that most users didn’t really get Miitomo

While we suspect that the Nintendo brand earned Miitomo many downloads, the game struggled to keep users interested. It straddles the line between a game and a social hub, and it starts off with the fun task of creating your own Mii character and gets users to spend some coins decking them out in gear. As fans have noted, after that the game slows as the core loop involves answering open-ended questions and earning coins to buy different clothes and costumes.

Looking at the metrics shows the true depth of the problem. Engagement, as measured by average days used per week, is a leading indicator of users’ interest in a game. The numbers show that Miitomo is played half as often on average in a week as Clash Royale, a poor omen for future performance. 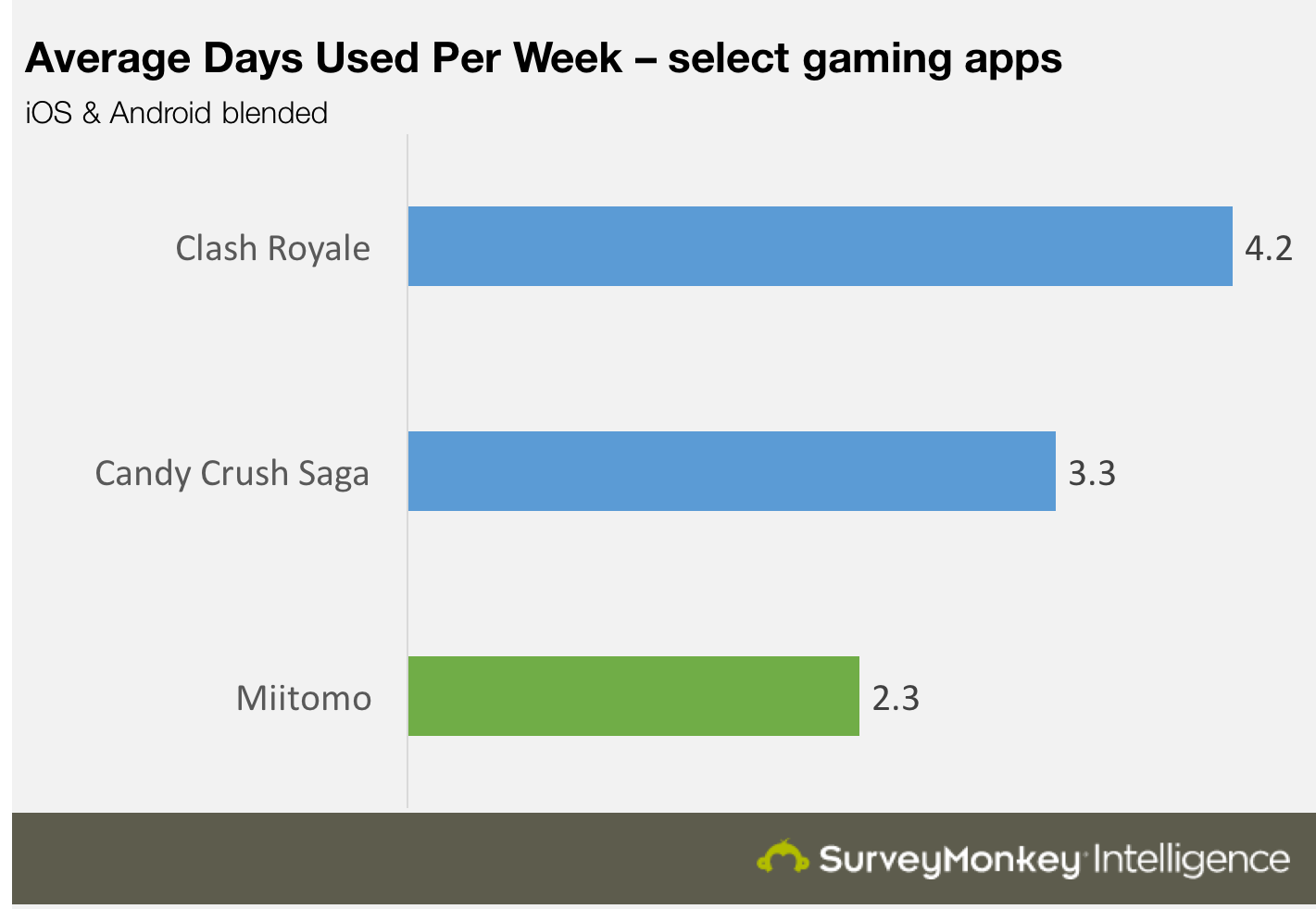 In Miitomo’s case, this lower-than-peers engagement translates into higher churn. The game’s weekly churn more than 50 percent means that over half of the users of Miitomo on a given week won’t come back and play it again the following week. For some apps that don’t need frequent use, this isn’t a problem, but for games like Miitomo (which are designed for frequent use), churn at this level foreshadows a quick decline. 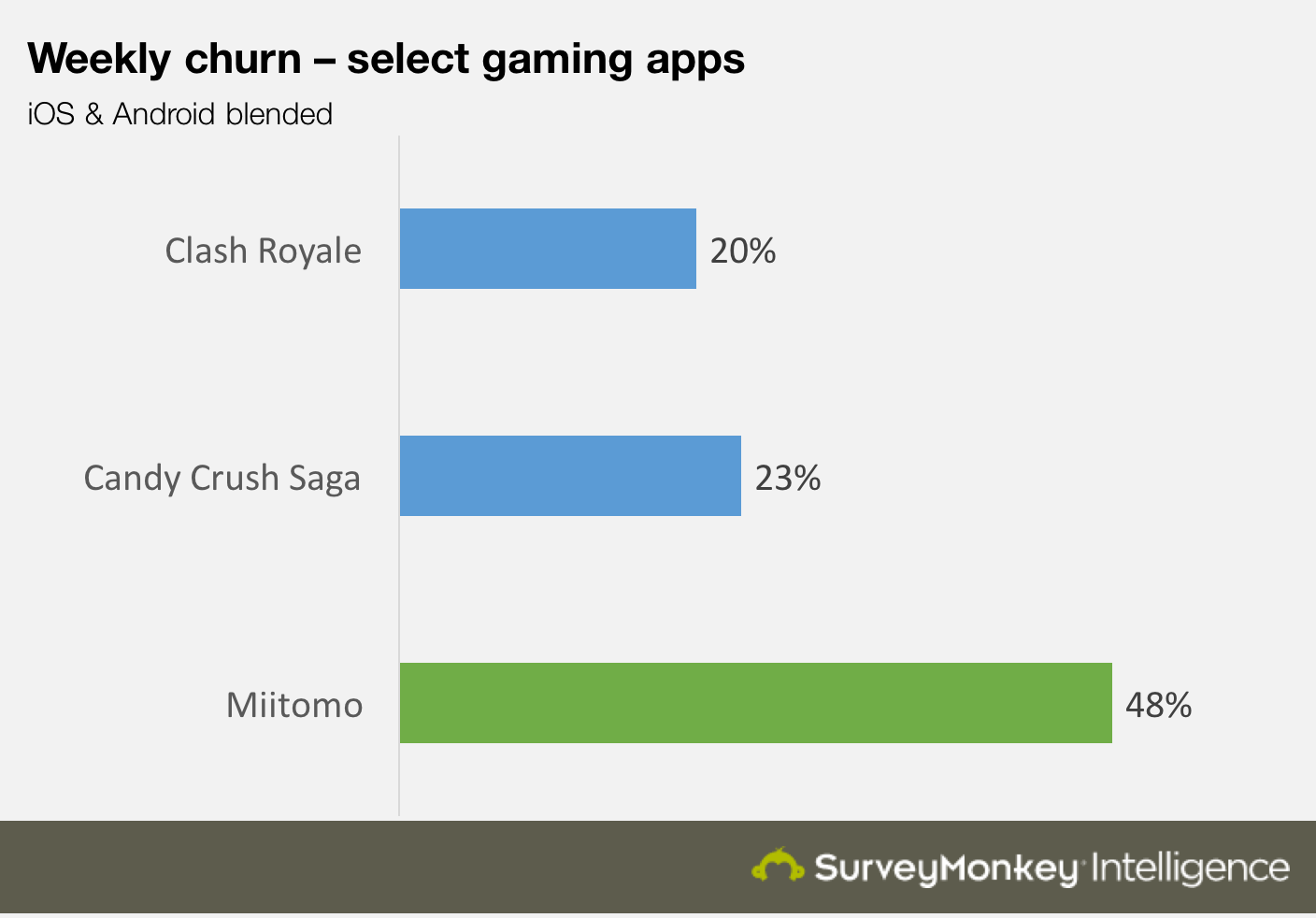 Decline in use shows the dangers of an emptying social game

Low engagement and high churn cause a steady decline in active users for Miitomo. When comparing to the other games it’s not necessarily the lower peak weekly-active users (WAU), that’s of concern, but the fact is that Miitomo drops off much more rapidly. Clash Royale’s lowest value is just 22 percent from its peak, and Candy Crush Jelly’s is 32 percent from its peak. But Miitomo WAU is 74 percent lower than its peak value in a much shorter timespan.

Miitomo is a social game. Much of its value comes from the presence of your friends. Why dress your Mii up in a cool new outfit if there is no one to see it? So as the game declines things get worse and worse for the remaining players who end up living in a ghost town. 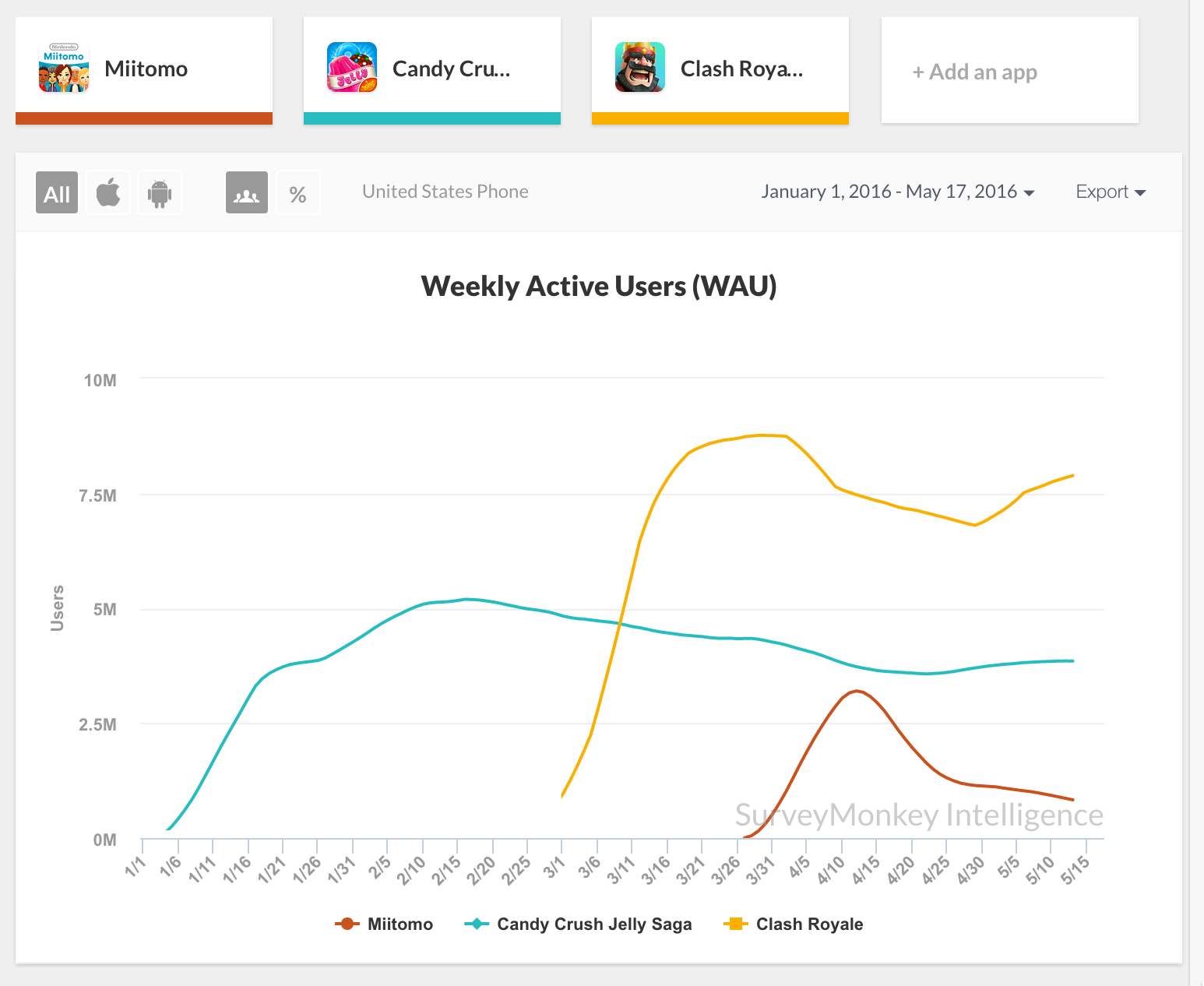 Miitomo proves that it’s not just about getting downloads

Miitomo’s rise and fall makes it clear that downloads aren’t enough to guarantee a successful  product. It’s a great metric to gauge interest but only shows a narrow slice of the picture. What matters is building an app that captures users’ attention and keeps them coming back. Luckily with free tools like SurveyMonkey Intelligence it’s easy to see past vanity metrics and dive into usage, engagement, retention and other metrics that truly predict future performance of an app.

But don’t dismiss Nintendo too quickly. It’s clear that Nintendo can drive a significant volume of mobile users to its apps. With another, more compelling title such as Pokémon Go, they have the chance to put up a real fight in the mobile gaming arena.

Arjun Lall, a former chief operating officer/cofounder of Renzu and director of product at Zynga, is head of product for SurveyMonkey Intelligence, which provides competitive intelligence on thousands on mobile apps.

Abhinav Agrawal is VP of SurveyMonkey Intelligence, and before that, he was the CEO/cofounder of Renzu, VP of Games @ Zynga, and a product manager at Amazon.