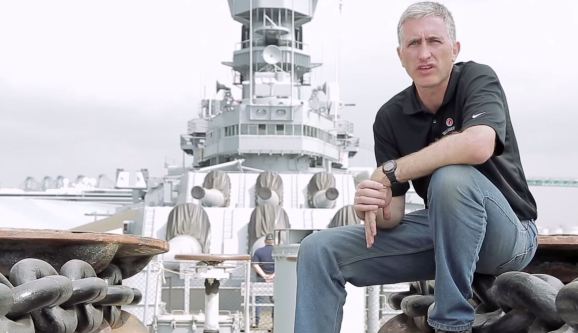 The battleship is a relic.

Obsolete even in World War II decades ago, these great warships continue to fascinate people around the globe. Otherwise, kids would be saying, “You sank my aircraft carrier,” as part of the tagline for the board game Battleship.

Wargaming understands the lure of these majestic, deadly warships better than any other game company on the planet. The maker of free-to-play PC online games World of Tanks, World of Warplanes, and World of Warships takes a museum-esque approach to re-creating these awesome ships (along with aircraft carriers, cruisers, and destroyers). It visits some of the remaining nine battleships afloat (eight of which are in the U.S.), such as the USS Texas, the only battleship from World War I left in the world, or the USS North Carolina. It uses staff historians to go over existing ship plans, securing documents from archives in around the world, from collectors, and even from retail to reconstruct these ships in a digital environment.

Wargaming does more than re-create history — it preserves it.

And here’s how it does so, as GamesBeat learned from conversations with Wargaming’s Nicolas “The Chieftain” Moran, the director of militaria (aka chief historian), and Allan Muncaster of militaria relations.

How do the Tuskegee Airmen, the famed African-American fighter pilot groups of World War II, factor into a naval game? One of Wargaming’s researchers, the 26-year-old Muncaster, had a great-uncle who flew with these legendary airmen, along with a father who was also a pilot. This ignited Muncaster’s lifelong interest in military history. His role shows you can turn your passions into a career even without having a college degree that fits the job.

“Hearing those stories, particularly of my uncle, flying P-51s [got me into military history]” he said. “My dad was a pilot, and we shared a passion with history. He kinda got me hooked on aviation history, then naval history, visiting local museums … here in the Bay Area — the USS Jeremiah O’Brien [a Liberty transport ship], the USS Pampanito [a submarine], and the USS Hornet [an aircraft carrier] — visiting fleet weeks.”

How Muncaster went from loving the small but deadly fighter planes to digging the majestic but lumbering and slow battleships is a story of scope and scale.

“They look amazing,” he said. “I love the way the dreadnought-era U.S. ships looks, with the lattice masts to the tripod design. Then you get to the North Carolina, the Iowa, and the Montana, three of the best-looking ships ever designed. On top of that, these are hugely powerful ships, and you get that sense of power.

“Looking at them, it all comes out in the game.”

The battleship held an important place in the history of the past century. It served a diplomatic role in the projection of power — see U.S. President Theodore Roosevelt’s use of older battleships (known as predreadnoughts) with the Great White Fleet. The arms race between Great Britain and Imperial Germany factored into World War I, and what was then the biggest arms treaty in world history dealt with battleship restrictions in the 1920s.

“What rammed it home for me and what really got me into battleships, a real-life experience, was visiting the USS Massachusetts,” Muncaster said. “To see the amount of engineering and work that went into building the vessel, you could see how it was the hallmark of national prestige before balance of power switched to the aircraft carrier.”

The World of Warships design team had a major decision to make when it settled in to design battleships — where to start. The game’s cruiser line has examples of ships dating from the turn of the 20th century, like the Russia’s Aurora (the mascot of sorts for Wargaming’s St. Petersburg base). But do you include the older battlewagons from before the design that revolutionized naval warfare — the Dreadnought, the first “all big gun” battleship that ended up lending its name to all future battlewagons?

Above: The Arkansas is a World War I dreadnought design.

Wargaming decided not to, because those ships would just be too obsolete. In fact, deciding which ships to include and why was a crucial step, especially considering the leap dreadnought development took when the “superdreadnought” appeared in 1910 with bigger guns, thicker armor, and faster speeds. Take the U.S. battleship tree: Your first ship is the South Carolina, America’s first dreadnought. You then jump to the Arkansas before you then hit your first superdreadnought, the New York.

The designers tried to make the jumps feels like a gradual progression, not necessarily the jarring leaps of tech that occurred in naval history.

“Our developers have done a very good job of creating a sense of progression that feels fluid — there’s a couple of points where you change that feels abrupt,” Muncaster said. “I’d say it’s not between from the North Carolina to the next phase of ships [the Iowa and Montana classes] but the Colorado to the North Carolina.”

How do you re-create the designs for these ships, down to the rivets? You find the plans.

Militaries’ bureaucracies are good at many things — including hoarding documents. Moran and his team were able to acquire copies of the original blueprints for many ships. At the time of this interview, Muncaster had sets of old plans for two key German ships: the heavy cruiser Prinz Eugen and battleship Tirpitz (the sister of the more infamous Bismark). And there was no doubt these were copies of the original plans.

“Stamped on the corner with Kriegsmarine,” Muncaster said, referring to the name of the German navy during the Third Reich. “They’re absolutely copies of the original blueprints.”

Wargaming scans these in, working with CAD software. It could be a complicated process, given that the blueprints for these beastly vessels are 10 feet long. The scanner bed, he said, could only fit in a 3-foot square, so they had to scan portions of the plans.

“Piece by piece, you’d get this giant print,” Muncaster said. It then goes to the art department — “They gave me wonderful tips for Photoshop.”