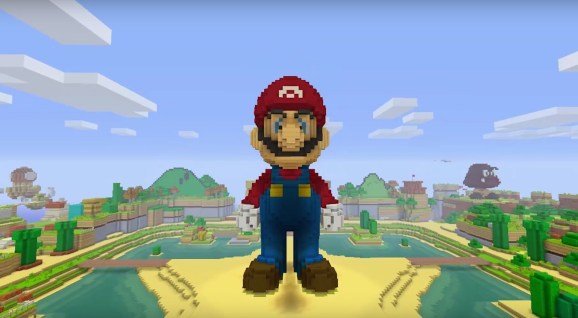 Mario comes to Minecraft in a Microsoft-approved way.

Minecraft is a huge deal for a generation of kids, and it is a great way to reach that young, crucial demographic. But marketers are no longer free to use the block-building game however they want to sell unrelated products.

Microsoft and developer Mojang, the owners of Minecraft, announced new policies today to cut down on corporations using the property to market their goods and services. In a blog post, Mojang spokesperson Owen Hill pointed to situations where something like a car company would build or commission an independent developer to build a Minecraft server with specific purpose of advertising a new vehicle. Minecraft has surpassed 70 million copies sold across console, PC, and mobile, and it is regularly one of the most popular brands among children in the $99.6 billion gaming business.

Many people are already using Minecraft to make a living. It is one of the most popular topics on YouTube, where several channels make money from videos featuring the game’s content. Mojang and Microsoft are saying that the new rules don’t affect those people. Instead, this is about corporations that are skirting around paying Microsoft by using the Minecraft game. The Windows company makes a significant chunk of its revenue from its business-to-business services, and it doesn’t seem to like the idea of brands finding a way around that when it comes to its premiere entertainment property. This also gives Microsoft more control over how people use Minecraft to sell products to minors.

“The number of Minecraft players has grown massively over the past few years,” reads Hill’s blog. “In fact, it’s now so big that Minecraft has become a viable place for companies to advertise unrelated products or for organizations to promote their causes. We want to empower our community to make money from their creativity, but we’re not happy when the selling of an unrelated product becomes the purpose of a Minecraft mod or server. That doesn’t feel right, or more importantly, fun. The new rules are an attempt to stop these things from happening.”

Here is the breakdown of the new rules directly from Microsoft and Mojang:

Corporations, businesses, advertising agencies, nonprofits, governments, and other entities may not use Minecraft gameplay to promote or market unrelated brands, products, campaigns, or services.

Specifically, if you are one of these entities or someone who is hired by them, you may not exploit Minecraft or Minecraft assets to:

This is all standard. Microsoft is letting its community continue to use Minecraft like it always has, and that includes building servers and mods that incorporate movies and products. If you like BMW cars, you can make a mod that brings those vehicles into Minecraft. But if BMW offers to pay you to make that mod for them, that’s now in violation of Mojang and Microsoft policy.