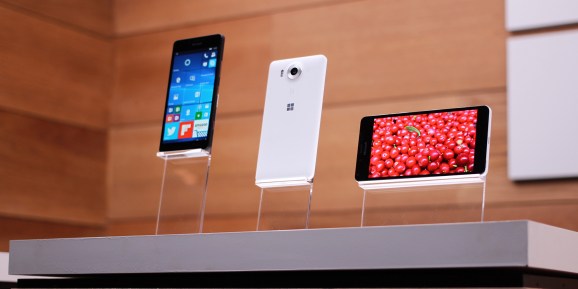 Despite claiming to be a “mobile first” corporation, last week Microsoft made two independent moves that pushed it even further away from the phone manufacturer it had become with the ill-fated Nokia acquisition, which closed in April 2014.

By selling the company’s feature phone operation and cutting over a thousand jobs in its smartphone division, Microsoft simultaneously finished off the remnants of Nokia, while signaling that the company had essentially abandoned its long-held goal of being a viable alternative to Apple’s iOS and Google’s Android.

For a brief period, it appeared that Microsoft would have the same tight vertical integration over its mobile ecosystem that Apple does, both producing the hardware and developing the software that powers it. But now it’s becoming increasingly difficult for the company to position itself as a mobile-first competitor, when its offerings look so underwhelming compared to the competition.

While it’s true that Microsoft continues to limp along with Windows 10 Mobile development, the operating system now accounts for less than 1 percent of new smartphones sold worldwide. It also develops a significant amount of mobile software — much of which is deployed on its competitors’ platforms.

It’s widely believed that Microsoft is working on a new handset or handsets, designed and built by its successful Surface team. And while such devices would draw a great deal of interest from Windows enthusiasts — a significant and vocal group, to be sure — it’s unlikely to move the needle when it comes to expanding Windows’ sliver of mobile market share.

That’s because, like Windows Phone before it, no one has much incentive to invest in the remaining Windows 10 Mobile infrastructure. Microsoft’s roster of hardware partners is exceedingly slim, and it includes none of the big-budget manufacturers that make up the rich Android ecosystem. While at different points in its existence, the mobile Windows platform has been adopted by such OEMs as Samsung, LG, HTC, and Motorola, Alcatel is currently the largest player to devote even a fraction of its lineup to Windows-powered handsets.

Just as critical as the dearth of hardware availability is the lack of developer interest in a platform with such low market penetration. Anyone who’s still developing for mobile Windows devices is probably doing it as a labor of love more than anything, with major apps dialing back support as well.

Microsoft has been aggressively attempting to counter this attrition by both unifying its desktop and mobile operating systems, as well as easing the barriers to porting over apps built for other platforms. Nonetheless, shrinking market share and a series of moves that have effectively deemphasized mobile do little to encourage developers to devote any resources at all to an ecosystem that appears to be in its final throes.

Born into the void

Let’s say that the so-called Surface Phone comes to market in the spring of next year, which seems like a conservative assumption based on existing rumors. What kind of world will it be born into? At that point, the last Windows 10 Mobile flagships (Lumia 950 and 950 XL) will have launched some 18 months prior, with only a smattering of mid-tier devices introduced in the interim. By all accounts, the Lumia 650, which officially debuted early last month, will be the last Lumia made — meaning that a full year may pass in which Microsoft releases no new handsets at all.

A year is a lifetime in mobile, and it’s easy to imagine that development of mobile-specific Windows 10 applications will very nearly grind to a halt during that stretch. In announcing the job cuts last week, Microsoft CEO Satya Nadella was somewhat opaque about his vision for the future of mobile at Microsoft, simply saying:

We are focusing our phone efforts where we have differentiation — with enterprises that value security, manageability and our Continuum capability, and consumers who value the same. We will continue to innovate across devices and on our cloud services across all mobile platforms.

However that vision translates to shipping products, it seems clear that Microsoft isn’t intending its next handset or handsets to be a reboot as much as a pivot. And that pivot will likely involve dialing back its aspirations, from being a strong alternative platform to one that exists only for niche use cases and particularly dedicated users.

Is it fair for the company to continue repeating the mantra of “mobile first” while at the same time embarking on round after round of layoffs that have decimated its mobile hardware development capabilities? That really depends on your perspective: Mobile isn’t just hardware, software, or services, of course, but a mix of these and other elements. Microsoft continues to maintain an active role in mobile software development, even as its homegrown mobile platform is on the verge of extinction.

“Mobile first, cloud first” has never been a promise to users as much as it has been an attempt to provide focus, both internally and externally. Still, in light of the tens of thousands of former Nokia jobs eliminated, and the staggering write-downs of nearly $8 billion associated with the failed acquisition, something along the lines of “cloud first, mobile second” might be more apropos.