The Toys-to-Life sphere is experiencing something of an upheaval right now. With sales of Skylanders down from last year, the amiibo craze cooling off a bit, Disney pulling out from the arena (and games) entirely, and perennial powerhouse Lego throwing their hat into the ring with Lego Dimensions. The competition for attention (and ever-valuable shelf space) is a harsher battle than ever, and as the originators of the genre, Activision and Toys for Bob are constantly looking for ways to innovate and keep the Skylanders game and toyline fresh.

In previous years, they’ve accomplished this by adding new gimmicks to the various collectible toys: swappable parts, vehicles, and even special traps players could buy and use to capture and assume control of enemy characters. But Imaginators takes Skylanders to a place the series has never ventured before: the realm of user creation. When Skylanders: Imaginators launches this October on PS3, PS4, Xbox 360, Xbox One, and Wii U, players will be able to create, save, and use a custom Skylander in the game for the first time ever. 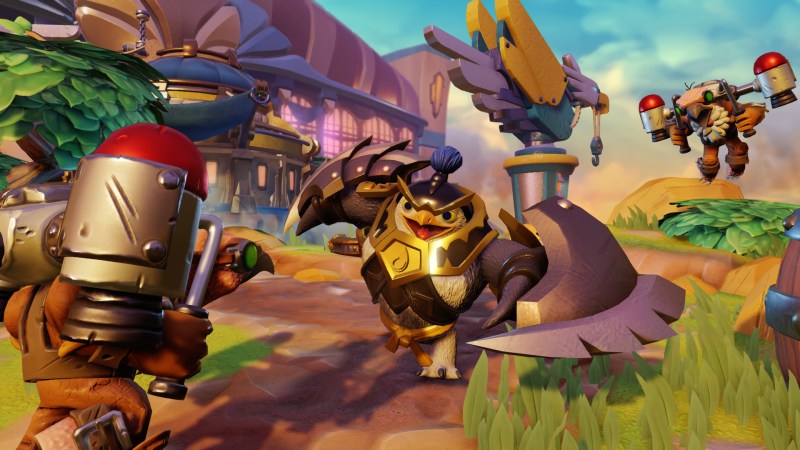 Above: King Pen is one of the new Sensei class characters.

The key lies in new toys called Creation Crystals, which are the vessels for a new type of in-game force called Mind Magic. The Creation Crystal figure looks like a colored crystal encased within a clear tube, and it lights up with a pulsating LED when it’s placed upon the Portal that brings Skylanders figures into the game. Each crystal color is affiliated with an element — red for Fire, blue for Water, and so on — so making a Skylander of a specific element requires a certain color Creation Crystal. The Creation Crystals can store character data, so players can take the toys with them if they want to share or showcase their custom Skylanders with friends.

When a Creation Crystal is placed upon the portal, players get a prompt to pick one of ten battle classes that determine how the Skylander behaves in combat (i.e. Knight, Smasher, Bowslinger, etc.). The combination of element and battle class chosen then opens up a wide array of other selections for players to customize their characters with — and with one hundred different element/battle class combinations to pick from, players have plenty of options even before they dive into the nitty-gritty of character creation.

From this point, players can customize the character’s body, gear, powers, personality, and color. Body customization lets you pick between hundreds of different pre-made body parts for your character, adjusting size and effect auras as you so please. The vibrant little touches that make Skylanders so appealing to the younger crowd is in full force during the body customization process. As you work on your character, they’ll make cute little quips and give feedback about your selections, as well as look at their new appendages.

Color customization can be done be using either pre-selected color themes (like a bright-colored red-orange-yellow fiery palette) for each body part — or, if the player really wants to get detailed, they can choose to custom edit every bit of color on the character’s body to their liking. Personality is a bit more straightforward: it lets you pick a character name, add theme music and sound effects (including a fart sound that’s bound to drive parents up the wall), and create a character voice and catchphrase. Catchphrases are created by combining different selections of pre-recorded voice samples, and then can be further tweaked by changing up the character voices with various sound filters.

Not all the customization parts are open from the get-go. Some treasure chests within the game contain Imaginite, which can add new gear and body parts. Fortunately, you can keep on changing up your custom Skylander throughout the game — a must when you get an epic drop of rare gear and stunning new powers with which to fell foes. To help obtain some of these coveted collectibles, you’ll need the help of a new class of Skylander, the Senseis. 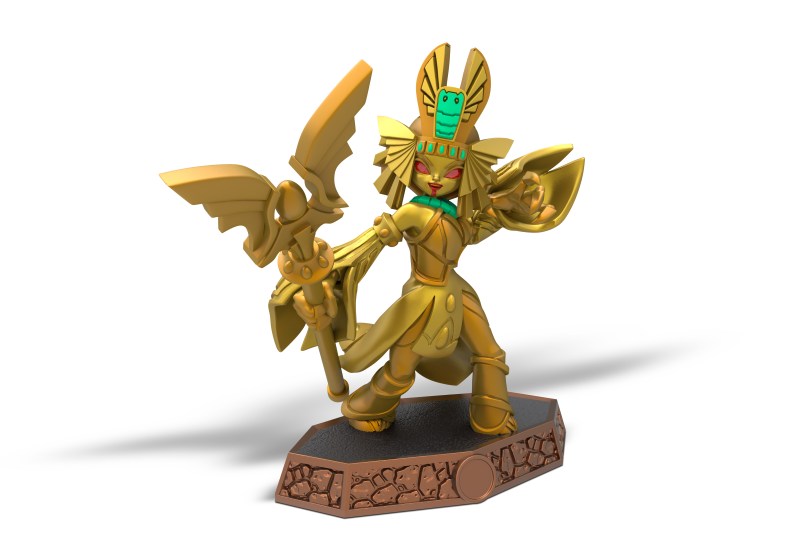 Above: Several new toys, including Golden Queen shown above, will be available when the game launches.

The Senseis are both a new game element and a new figure line launching in tandem with the game. Each of the ten Senseis represents one of the ten battle classes available when creating custom characters. We saw a few of these characters at our demo session: King Pen, a penguin-looking brawler; Tri-tip, a smashing triceratops with a huge mace; and Golden Queen, a reformed villain who represents the Sorcerer class. These characters are the masters to the player-created apprentices. Each Sensei you bring into the game ups the level cap that all created Imaginator characters can reach by one. They can also unlock a special technique that can be used by created characters of the same battle class.

The Senseis are also playable in-game, and come with a variety of over-the-top special attacks. They also have an exrta gauge called a Sky Chi meter, which powers an attack that is exclusive to each Sensei. As one goes through the game, they will discover Sensei Shrines that require particular Sensei characters to open and bestow these unique Sky Chi powers. 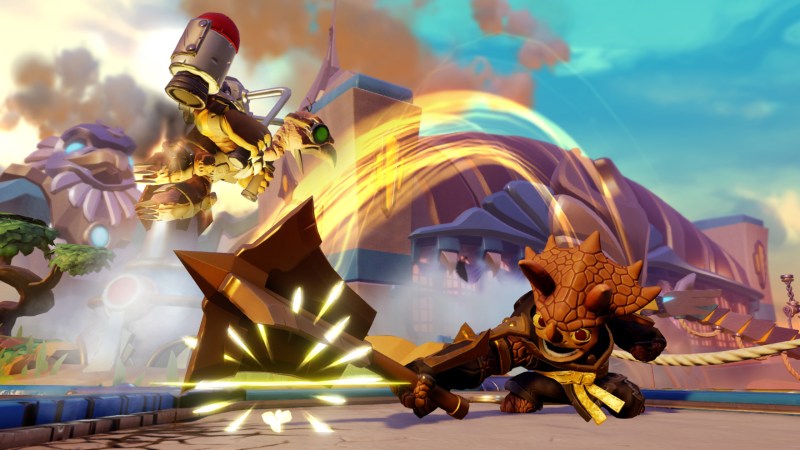 So why the focus on user creation this year? “The vast majority of fan art that comes unprompted is original art from our fans,” explains Paul Yan, Creative Director at Toys for Bob. “We’ve always been thinking in the back of our mind, ‘How can we deliver on this?'”

“One of the things that’s always made us stand out is that, year over year, we always introduce something new,” continues Lou Studdert, production coordinator at Activision. “We’re now five years in. Kids now take the idea that they can bring their characters to life in a video game for granted. We’re not going to release the same game every year — we’re constantly innovating, constantly looking at new ways to play and make the game feel magical … and now we’ve got something nobody else can do [with Imaginator custom characters] because we control our own IP.”