Google today announced that it has more widely deployed its Accelerated Mobile Pages (AMP) technology for Google News, which is available on iOS, Android, and the Web. No longer is this capability limited to English-speaking Google News users in the U.S. 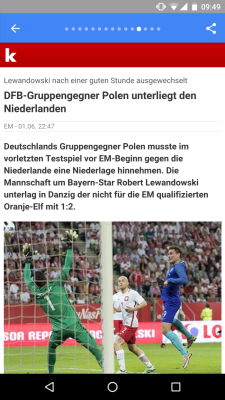 Above: An article in German accessed via Google News with the Accelerated Mobile Pages (AMP) technology.

Unlike Facebook’s similar Instant Articles, the underlying technology is open-source software, and so Google is collaborating with several third parties to develop it.

Google has been doing its part to expand use of the technology — including bringing it to the Google app for iOS last week. But the idea is to apply it to recipes, local listings, and product listings, among other types of content, according to the recently published roadmap for the project. This should make it more useful for websites, regardless of whether they’re Google properties or not. Planned support for live blogs, forms, and even offline access could make the technology even more appealing.

But, for now, AMP pages are certainly useful for news articles, which can be bogged down with heavyweight ads and other content. And as of today, they’re accessible to more people.