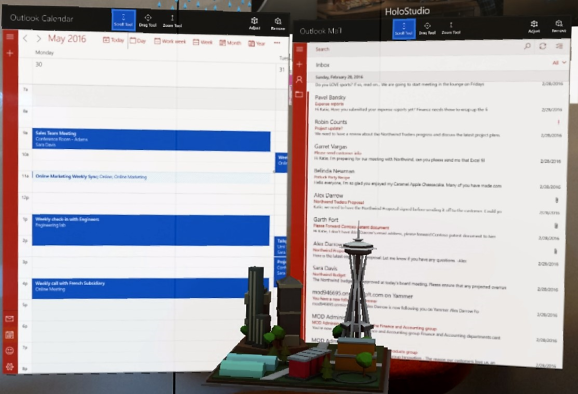 Because you know Microsoft wants you to be productive in that HoloLens.

Today Microsoft said that its Outlook email and calendar app can now run on the HoloLens. It’s a Universal Windows Platform (UWP) app, which means it can run on any device running Windows 10. And Microsoft’s HoloLens augmented reality headset does indeed run Windows 10.

“With Outlook Mail on HoloLens, you can now place your inbox on your office wall to stay on top of emails while simultaneously interacting with other digital content in your real world. You can also quickly see what’s coming up next in your day with your new wall calendar,” the Outlook team wrote in a blog post.

This isn’t the first Office app to come to the HoloLens. Previews of Word, Excel, PowerPoint, and OneNote also work on the device.

But the exciting part is that the underlying Windows Holographic platform that the HoloLens relies on is going to become the basis of other types of devices, including virtual reality headsets like the HTC Vive. So while the HoloLens is the main thrust of this announcement, it’s conceivable that similar experiences will come to many other systems natively. You won’t need to do something janky, like go to Outlook.com in the Edge browser, which is the way that people have accessed the online mail and calendar client on HoloLens until now. You may not have to employ a separate app like Virtual Desktop in order to get to Outlook, either.

“This release is just the beginning, and we’re excited about the opportunities that HoloLens presents to build new and powerful ways of staying connected, productive and on top of your schedule,” the Outlook team wrote.