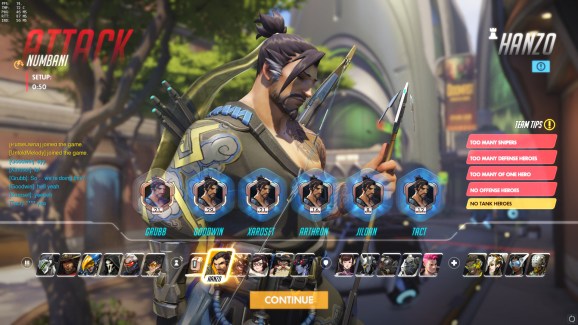 You will have more frames per second to dodge Hanzo's arrows.

Activision Blizzard has another blockbuster success.

Overwatch reached 7 million players worldwide, Blizzard Entertainment said today. That’s on PlayStation 4, Xbox One, and PC. While one player does not equal one copy purchased, this definitely shows that Overwatch is massively popular. For comparison, Ubisoft revealed earlier this month that its shooter The Division has 9.5 million registered players, and that was after more than two months on the market. Gaming is a $99.6 billion industry, and Blizzard is one of the best companies in the world at capitalizing on that player base. Overwatch, which is a class-based team shooter that GamesBeat adores, is ensuring that stays true.

In a canned statement, Blizzard chief executive officer Mike Morhaime noted that the company was aware of the anticipation for Overwatch following the open beta that attracted millions of players.

“We poured a lot of effort into creating a game — and a new universe — that anyone could enjoy,” said Morhaime. “We’re ecstatic to have had such a successful launch, and we’re looking forward to all of the fun, competition, and new content still to come.”

Blizzard shared a few more metrics that are difficult to put into context. This includes 119 million hours of combined Overwatch gameplay for all 7 million players. And players have swapped heroes, which is a key element of the gameplay, more than 326 million times. While Blizzard’s public relations team obviously picked these figures cause they sound impressive, it’s likely that the internal team at the company are more concerned about engagement and how many people are paying for in-app purchases.

While Overwatch is a $40 game on PC and $60 on console, it also has an option to spend money to speed up your progression and unlock cosmetic items, which is something GamesBeat tested out already. Blizzard is expecting this will continue to bring in money for the next several years.

Blizzard is also not going to give Overwatch the chance to grow stale over the summer. The company has already announced plans to update the shooter with a new competitive mode by the end of this month, and you can probably bet that gamers will see some new character skins and emotes before too long as well.

For now, however, 7 million people are probably enjoying one of the best games of the year so far.