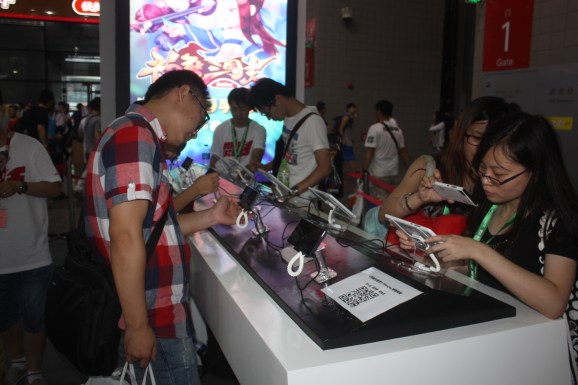 The N5 hall at ChinaJoy was dedicated to mobile games.

A Chinese government agency in charge of censorship has issued a notice saying that mobile game makers must submit their content for approval with the agency 20 days prior to launch. Those that are already in the market have to submit those previously published games as well by October.

Lisa Cosmas Hanson, a managing partner at Niko Partners, said that she read an translated version of the new regulation, and it appears “very comprehensive.” The Chinese State Administration of Press, Publication, Radio, Film, and Television (SAPPRFT) focused its announcement solely on mobile games, not non-game mobile apps, she said.

“It will insure that all mobile games get approval by 20 days prior to launch, and retroactively for those games already in the market,” Cosmas Hanson said. “The games already in the market have until October to get their approval, and any major changes or updates to existing games must also be approved in the same manner. It seems that this will be quite a cumbersome task for the SAPPRFT to manage.”

The announcement applies to all downloadable or Internet-connected games on smart devices. The regulation has rules for “simple non-story-based match-3, running, flying, chess and card, puzzle, sports, music, and dancing casual domestic games that DO NOT touch political, military, ethnic, religious topics.” Those gamemakers have to fill out a form, submit it 20 days before release, and wait for province-level governments to finish going through the review within five business days.

The publisher needs to “publish the game according to all the requirements listed on the approval document and report releasing time, download link, and other operational details such as operational institution’s name and prepaid info to the local province-level government within seven business days after the game is released.” If the company cannot put the game online 20 days after the scheduled release date, the company needs to report the reason to the province-level government.

The agency has another set of rules for companies that publish overseas games under a license. If an approved mobile game changes ownership, then it has to be resubmitted.

When a game is released, the publisher needs to show the “Healthy Gaming Notice” from the government. When jointly operating a game, both companies need to review and determine if the game has completed the application and censorship process.

The notice takes effect on July 1, 2016. All phone and tablet manufacturers need to make sure that preinstalled games have completed the aforementioned processes.