The words “Final Fantasy XV” might sound like nonsense for anyone unfamiliar with the long-running video game series. But the developers hope that they can convert some of those people into new fans with a combination of games and movies.

Final Fantasy XV (out September 30 for PlayStation 4 and Xbox One) is the next entry in the renowned Japanese role-playing game series. The story centers around Noctis, a prince from the kingdom of Lucis, and his friends as they go on an adventure-filled road trip.

The future of the franchise, which has sold over 110 million copies since its inception in 1987, may depend on how well Final Fantasy XV performs. The Japanese gaming industry is focused on making mobile games thanks to incredibly lucrative apps like Puzzle & Dragons and Monster Strike. Huge blockbuster JRPGs for consoles like Final Fantasy XV is a rarity.

In a group interview at a preview event in March, game director Hajime Tabata told a group of reporters (via translator) that he tries not to think about what would happen if FFXV is a commercial failure. If that does happen, he said the series would “go in a direction that we [the creators] wouldn’t really be happy with.”

That’s one of the reasons why Business Division 2 — the studio within Square Enix in charge of the Final Fantasy series — is targeting new players with an ambitious multimedia strategy. In addition to the main game, it’s also making the mobile game Justice Monsters Five, the computer-animated movie Kingsglaive, and the five-episode anime series Brotherhood. They’re all part of the so-called Final Fantasy XV universe.

“It’s one way for us to get new people interested in the series who have never really been familiar with the Final Fantasy franchise,” Tabata said of this initiative. “It’s also a way to get former fans who may have [moved] away from the franchise in the past couple of years [and bring them back].” 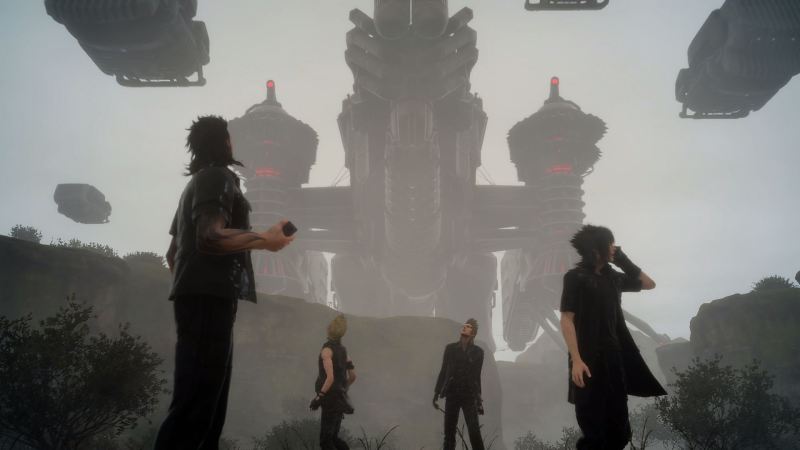 Above: Strange things are going on in Noctis’s world.

‘We have kept you in mind’

The Roman numerals in a Final Fantasy title are sacrosanct. For hardcore fans, the change in numbers indicates that the game will be different from the other Final Fantasies that came before it, and that it’ll have a new world filled with new characters. For newcomers, however, the Roman numerals might appear intimidating. I asked Tabata if he ever considered jettisoning the XV moniker entirely.

“Yes, I have thought about getting rid of the number. I had the same exact [intimidating] impression when I saw the number 15 myself,” he said. “From a general viewpoint, it’s such a high number that you don’t know what the latest entry is. Personally for me, I don’t know of another global gaming brand that has so many entries in the franchise. … For XV, I [made it our goal to] get new players, grow this global brand, and appeal to the mass market — new users who aren’t familiar with the franchise.”

It was important for Tabata and his team to make sure anyone can pick up and enjoy FFXV even if they haven’t played the other entries before. They want new players to “understand that we have kept you in mind” while making the game.

Final Fantasy XV has a few features designed to help out the uninitiated. For the first time in the main series, players can change the difficulty level of the battles. A difficulty setting was one of the most common requests from people who tried Episode Duscae, a FFXV demo that came with copies of Final Fantasy Type-0 HD last year. Tabata said the easy mode is “for people who aren’t familiar or aren’t as good with action-based combat games,” and that it allows them to focus more on the story.

Another helpful tool is Carbuncle, a small fox-like creature that players can use if they completed the Platinum Demo. In addition to serving as a tutorial for FFXV’s combat, the demo gives players access to Carbuncle in the full game. Carbuncle will automatically heal you if you’re about to die. 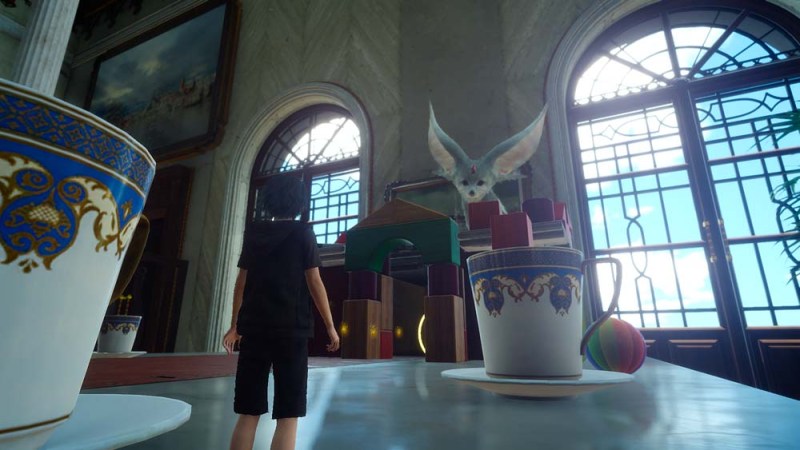 Above: An extra-large version of Carbuncle shows up in the Platinum Demo.

Building a universe of products

While Final Fantasy XV has a standalone story, the multimedia projects built around it expand the plot in different ways. The CG movie Kingsglaive is from the same team who made Advent Children, an animated film that continued the story from Final Fantasy VII. According to Tabata, they wanted the new movie to explore the relationship between Noctis and his father, King Regis (who Noctis believes is dead near the beginning of FFXV). One of the main goals for Kingsglaive was to attract people who might not otherwise play a Final Fantasy game.

“We also consulted with Hollywood writers to see how we could draw in a mass market [audience] and incorporate new ideas that we haven’t [used] in the past,” said Kingsglaive director Takeshi Nozue during a press conference.

The writers probably told them to hire popular actors. During a live fan event in Los Angeles, Square Enix revealed the star-studded cast for Kingsglaive: Lena Headey (known best as Cersei in Game of Thrones) plays Princess Luna, Sean Bean (Ned Stark in Game of Thrones) is King Regis, and Aaron Paul (Jesse from Breaking Bad) is the voice behind Nyx. They are all widely recognizable actors, and their involvement will likely get non-Final Fantasy fans interested in the movie.

Like Kingsglaive, Brotherhood tells a story that isn’t seen in Final Fantasy XV: It explains how Noctis became friends with his traveling companions. Justice Monsters Five, meanwhile, is the free-to-play mobile version of a minigame found during Noctis’s journey in FFXV. 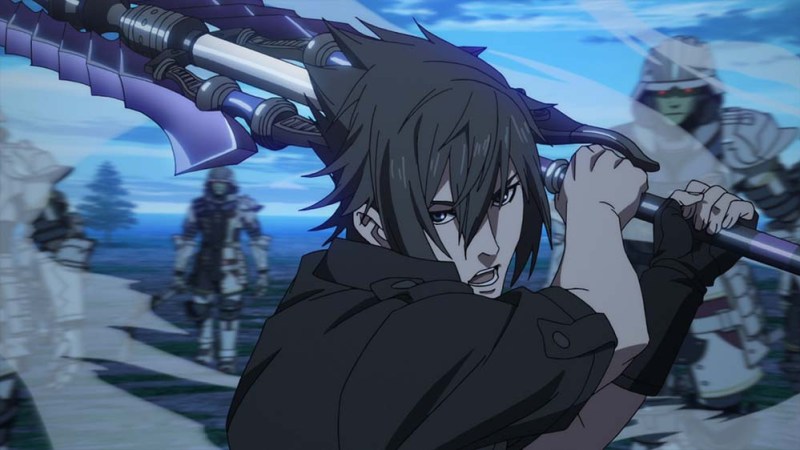 Above: Noctis in the Brotherhood: Final Fantasy XV anime.

From the outside, it seems presumptuous for Square Enix to create tie-in products before players even have a chance to try Final Fantasy XV. But Tabata doesn’t think they’re overreaching. He was surprised that they’d never done something like this before with previous games, and told us that they’re doing everything they can to “maximize” the game’s potential.

“[Our goal] is not to maximize profit margins and revenue flow from our core fans,” Tabata added. “It’s an honest approach of, ‘We want to give our fans various entryways to enjoy this, and have more people enjoy and experience this game and brand.’”