Genvid Technologies is coming out of stealth today with the ambition of creating “revolutionary esports broadcasts.” It wants to make esports broadcasts more compelling to watch, bringing multiple camera angles and interactivity into the live streams of furious game matches.

New York-based Genvid is starting a limited alpha test soon, and I’ve seen a demo of how it could work with a game like Unreal Tournament 2016. Over time, Genvid wants to enable developers to control the camera angles of esports broadcasts as if they were sitting in the broadcast editing booth of a major sports event. The company says this could help esports companies achieve what has been lacking so far: better storytelling, more emotion, a focus on the most-exciting players and action, and a step up in broadcast quality.

In esports matches, it’s often hard to figure out what’s going on. And sometimes a game is built mainly with the needs of players in mind, rather than spectators. As a result, esports broadcasts, which are generating an estimated $325 million in sponsorship and marketing revenues this year (according to market researcher Newzoo), could eventually attract wider, more casual audiences, said Jacob Navok, founder and chief executive of Genvid, in an exclusive interview with GamesBeat.

“We could enable a developer to set up a 24/7 channel that connects to the most interesting match that is happening based on viewer interactivity and feedback,” Navok said. “We could automate the camera controls based on popularity or have the developer control that itself.” 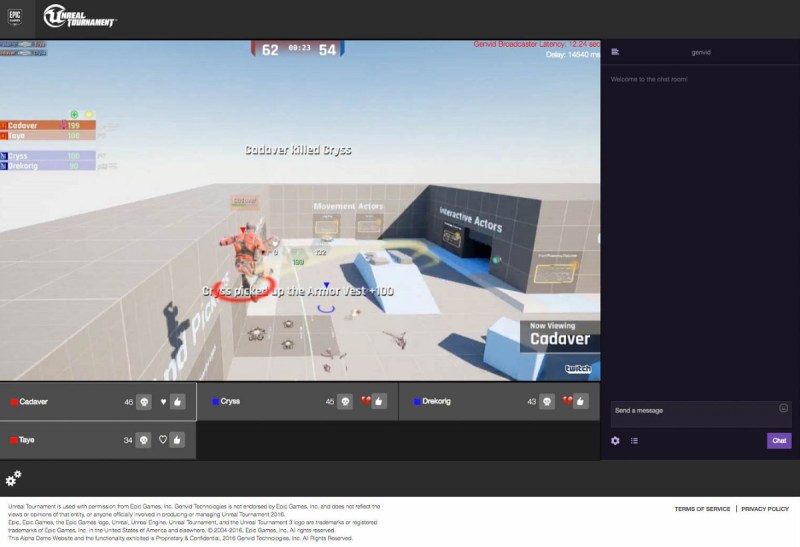 “One of the main problems we identified is that interactivity is gone from multicast streaming,” said Navok. “We are working with developers to improve the way that they broadcast. You don’t watch a Major League Baseball game from the viewpoint of a GoPro camera strapped to a player’s back. That’s 100 percent of Twitch today. Maybe you could fire up dozens of cameras in a virtual arena. The developer can fire up camera one, camera two, camera three. There’s a massive audience out there that developers could monetize directly if they had the right tools. ”

The spectator might be able to control the camera view. Or the camera could automatically focus on who is the most popular at the moment.

“The audience may only be interested in one player, and we can have the camera focus on that player,” Navok said.

Genvid was born in March from the ashes of another ambitious startup. Jacob Navok ran business development for Shinra Technologies, which shut down earlier this year after trying to create massive server-based games with cloud streaming technology. Shinra had the support of Square Enix, the big Japanese game publisher, but the company struggled for various reasons and closed down. Navok continued to look at opportunities in interactive streaming, and he has teamed up with former Shinra veterans. Shinra’s former chaiman, Yoichi Wada, the ex-CEO of Square Enix, is an advisor for Genvid.

He added, “We are building tools that allow developers to create many cameras in their arena, that allow them to create interactivity in their arena. When you stream to Twitch, you are just creating a video feed. We thought you can create more immersive experiences like an IMAX for esports online broadcasts.”

Right now, players and Twitch make money from esports livestreams on Twtich. But developers could also make money through something like Genvid. 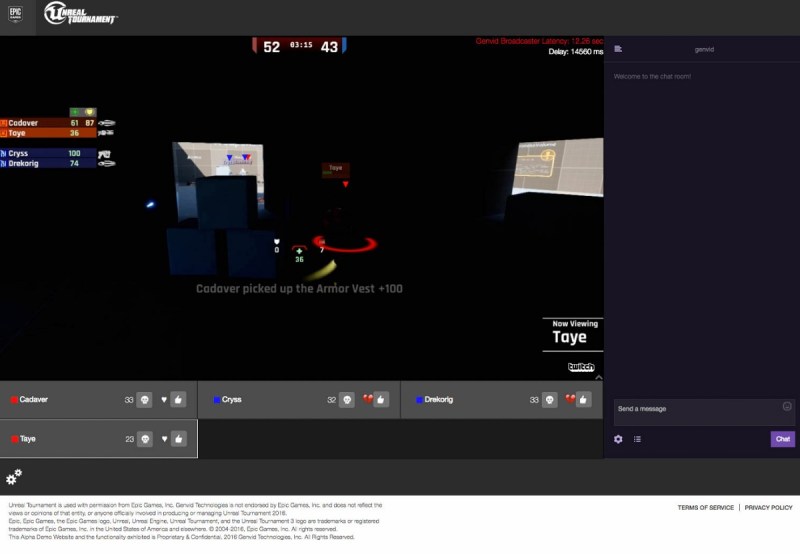 Above: You can see exactly what and where the audience is watching in a esports scene with Genvid.

Genvid’s demo is built on top of the new Unreal Tournament 2016 Alpha and is being made available to developers with the permission of Epic Games. The demo, using live matches that are broadcast to Twitch.tv, allows viewers to click on the video itself to directly interact with the game that they are watching. Genvid’s technology additionally converts real-time popularity data back into the game’s camera to complete a truly interactive streaming experience. Dynamic cameras, direct input that affects the game state, and clickable interactive video interfaces bring the in-engine spectator experience to livestream feeds.

“The game industry has been circling around this segment for years, but Genvid is the first company positioned to bring engagement to the massive market that is non-players of games,” said Wada.

Navok said Genvid can make any multiplayer game more compelling to watch on popular livestream services like Twitch. The company’s name is a fusion of two Latin root words, Gen meaning “birth” and Vid meaning “viewing.” This reflects the company’s mission to power a new era of interactive streaming experiences.

“Esports has a completely inverted business model today compared to what it should be,” Navok said. “Major League Baseball doesn’t make money selling bats and balls to players. It makes money from sponsors and fans watching it. I want to help change that and help developers monetize it. Esports isn’t just for promotion. I can help monetize it.”

Genvid offers three technologies in one suite (Broadcast, Engage, Analyze) made possible by applying the team’s experience with server-side gaming to the limitations of current livestreams. Genvid’s Broadcast technology allows for the creation of dynamic camera angles, composed professionally in real time. Engage allows for real-time and tactile input, customizable for each viewer. Analyze tracks the pulse of the viewing audience and ensures the highest level of crowd satisfaction. The latter means it fixes the camera on the angle that the spectators like the most, such as a view of a certain star player.

Developers could create instant replays based on viewer demand and composite them in real time to be shown quickly. You could also track a player or get information by clicking on that individual in the stream. And the popularity of particular scenes could determine instant replays. A developer could figure this out by looking at what players are talking about within a chat window.

It’s not clear where Genvid will have competition. Super Evil Megacorp is working with a Korean broadcaster to bring multiple camera views to Vainglory esports matches using Super Evil’s proprietary mobile game engine. But Genvid is talking about doing things no one else can with interactivity.

Navok said that if audiences are more engaged, the players and esports companies will be able to benefit from better advertising results, allowing the esports industry to resemble professional physical sports in terms of overall monetization through ads. Genvid hasn’t used either Square Enix or Shinra technology for its demo, and it hasn’t received any endorsement from either Twitch or Square Enix.

The company has a working demo, and it is looking to do beta tests with esports companies (developers or league broadcasters) in the summer. So far, Genvid is self-funded, and the company has begun talking to parties about raising money. Genvid’s platform will be built on top of Amazon’s online services, including its graphics processing unit (GPU) servers.

“We are sending a data stream alongside Twitch and are showing what is occurring on a frame-by-frame basis,” Navok said.

While Shinra was trying to build a super-low latency system with its cloud-streaming technology, Genvid’s system has more tolerance for latency.

As for Shinra, Navok said, “We learned a few things. … What is hard to do is to get many renders done on a single server. You don’t want to have 20 different servers for 20 different cameras in a game. We do it in a different way than Shinra did, but we can get many cameras on one server. The second learning was real-time analysis of external data. You have to be very fast with this. We take in data and allow the game to make a decision about how it affects gameplay data. And the final learning was how we manipulate engines to allow for data to be sent along a stream to make it interactive. We did that with Unreal Engine 4 in this case.”

The demo is free to use. The business model is yet to be determined, Navok said. Genvid plans to release a software development kit (SDK) later this year. The company has four employees, as well as advisors Wada and Jayson Chi of McKinsey & Co. 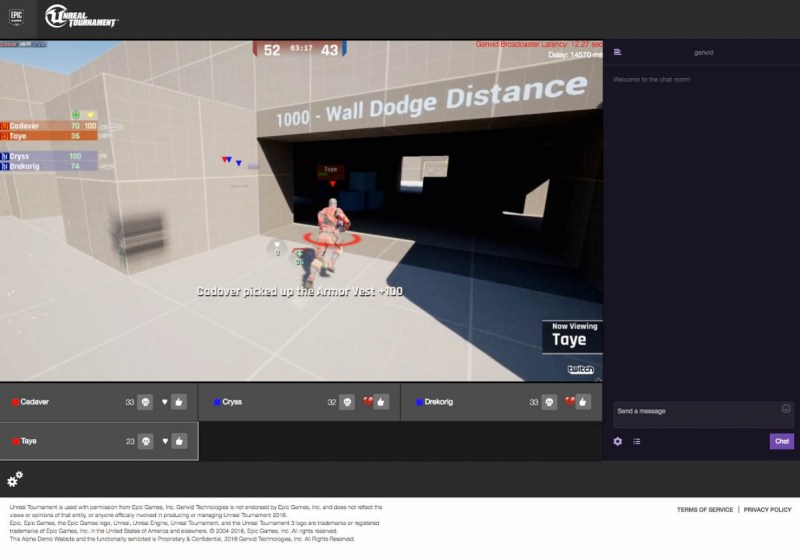 Above: Genvid enables multiple camera angles and slow motion in a livestream.