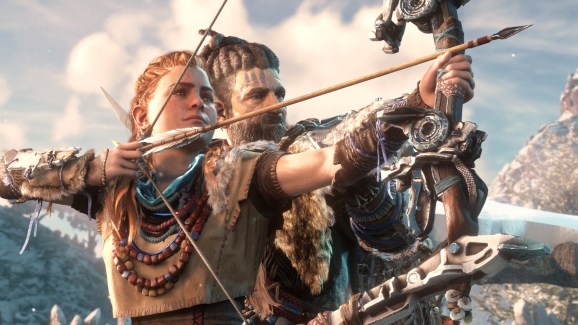 Motion is relative. Sometimes you move closer to the Horizon, and sometimes it moves further away from you.

Horizon: Zero Dawn, the anticipated PlayStation 4 exclusive about fighting robot dinosaurs, is getting a delay from 2016 to early 2017. In a blog post on Sony’s PS site, developer Guerrilla Games managing director, Hermen Hulst, explained that production is still moving forward but the studio wants to ensure the game lives up to expectations. The postapocalyptic shooter will now debut February 28 in North America and March 1 in the Europe. This is a significant loss for the PS4’s 2016 roster since Horizon has looked like one of the most impressive new property launches and was one of GamesBeat’s most anticipated games in the console sector of the $99.6 billion gaming industry.

In the blog, Hulst stated that the company said it wasn’t easy to decide to delay Horizon, but it thinks it is doing it for the best reasons.

“We know many of you have been anxious to play the game since we first announced it,” he wrote. “However, we also want to ensure that Horizon Zero Dawn lives up to the visuals and gameplay quality that our games are known for. The new date affords us the extra time required to deliver fully on our ambitious vision for Horizon Zero Dawn.”

Horizon wowed gaming community last year at the Electronic Entertainment Expo trade show, and Guerrilla seems aware that it has set a high bar. Delivering a product that look and plays like the game we saw at E3 — in a hands-off demo — is crucial to ensuring gamers feel good about purchasing it.

To show people the progress it is making, the developer also released a new trailer that focuses on the hero Aloy. Check it out:

Finally, Hulst also wrapped his post by reiterating that this is what Horizon needs.

“We realize that this decision may not please everyone, he wrote. “At the same time, we’re confident that the advantages of the additional development time afforded by the new date will become clear in the coming months, as we start to share more cool details and videos from Horizon Zero Dawn. We really, really appreciate your patience and continued support, and look forward to bringing you the best game we possibly can in February 2017.”