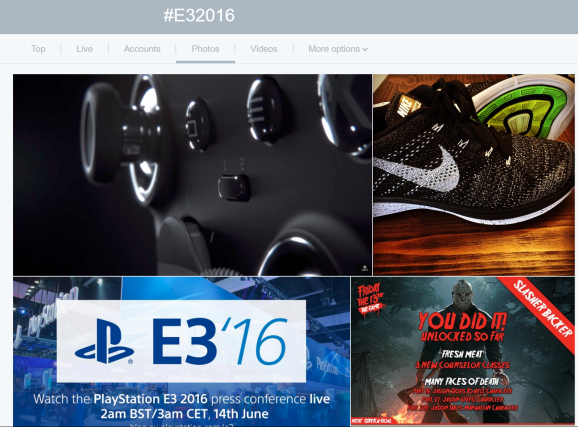 A lot of people use Twitter to talk about games — or maybe it’s just me, and I tweet way more than I thought I do.

After 84 million tweets about gaming in 2015, Twitter wants to help everyone understand more about the portion of its users that love games. The Electronic Entertainment Expo trade show is next week, and the social network is expecting fans, developers, and publishers to make it one of the most tweeted events of the year. It is one of the largest industry gatherings, and it is an opportunity for game makers to capture attention for their upcoming slate of products. But beyond the volume, Twitter also points out that the people on its service represent a higher-spending demographic in the $99.6 billion games industry.

Game fans were among an early group of adopters on Twitter late last decade, and that has grown into hundreds of thousands of tweets about the subject per day. Now, the company is highlighting its engagement with this audience in an effort to generate more revenue from the marketers that would like to reach them.

Twitter has found that 65 percent of its users are gamers. It also notes that 55 percent of that audience plays on consoles regularly. That’s key for marketers looking for ways to stand out during the busy E3 show, which has dozens of back-to-back announcements primarily for the consoles from Sony, Microsoft, and Nintendo as well as PC.

While the kind of gaming fan that uses Twitter has money and likes to talk about their favorite subject, they are also using the platform in predictable ways that indicate their purchasing intent. Most new games get an account on the microblogging site, and 78 percent of this gaming audience learned more about upcoming releases by following a game’s official handle. Among those people, 81 percent already own at least one console with 53 percent of them having made that purchase in the last 12 months. 40 percent plan to buy a new console in the next year.

Finally, Twitter revealed that trailers and game releases get people talking on its platform.

Above: Two things really get game fans talking on Twitter.

If you want to get people excited about a game release, the best option is to debut a trailer with gameplay followed closely by screenshots of gameplay. More than half of people who have a “heavy interest in gaming,” according to Twitter, prefer to see that kind of content from developers and publishers. And 44 percent like to see bonus content and behind-the-scenes reveals.