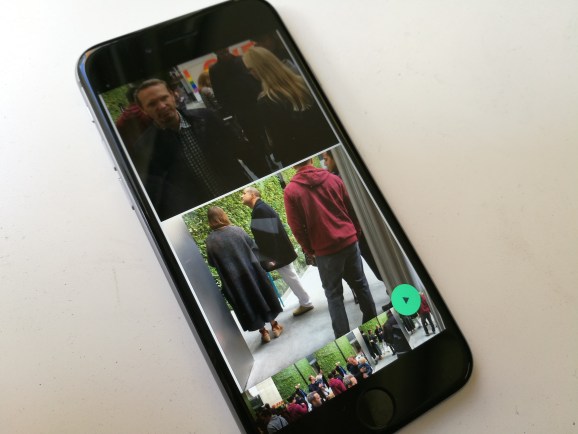 Google today announced the launch of Motion Stills, a new iOS app that takes your existing Live Photos made with an iOS device — essentially several frames automatically captured before and after you hit the camera app’s shutter button — and stabilizes them in order to make shareable GIFs and video clips.

The app is available today on the App Store. But Google may well end up adding the technology into its other applications, like the Google Photos cloud-based photo storage app, Ken Conley and Matthias Grundmann of the Google Research Machine Perception team wrote in a blog post.

The app works offline, and you don’t need to sign in to any service in order to use it — just give the app permission to access the photos on your device and you’re good to go.

Motion Stills follows the release of Microsoft’s Hyperlapse time-lapse video apps across devices. And Facebook’s Instagram has its own Hyperlapse app. This technology is different, but what it can do with video is just as impressive. Especially because it proves just how unstable Live Photos are without any intelligent modifications.

“We pioneered this technology by stabilizing hundreds of millions of videos and creating GIF animations from photo bursts,” Conley and Grundmann wrote. “Our algorithm uses linear programming to compute a virtual camera path that is optimized to recast videos and bursts as if they were filmed using stabilization equipment, yielding a still background or creating cinematic pans to remove shakiness.

“Our challenge was to take technology designed to run distributed in a data center and shrink it down to run even faster on your mobile phone. We achieved a 40x speedup by using techniques such as temporal subsampling, decoupling of motion parameters, and using Google Research’s custom linear solver, GLOP. We obtain further speedup and conserve storage by computing low-resolution warp textures to perform real-time GPU rendering, just like in a video game.”

You can share your stabilized videos — whether an automatically improved version or a string of stabilized videos across any app, and there’s a direct button for uploading to YouTube. Here’s a video I made showing various moments from Apple chief design officer Jony Ive’s visit to the recently opened Apple Store in San Francisco’s Union Square area:

YouTube does let you stabilize videos that you’ve uploaded, but in this case I chose not to do that, because I wanted to demonstrate the capabilities of Motion Stills on its own.

There’s no information about whether Motion Stills will come to Android, but then again, there are no Live Photos on Android.