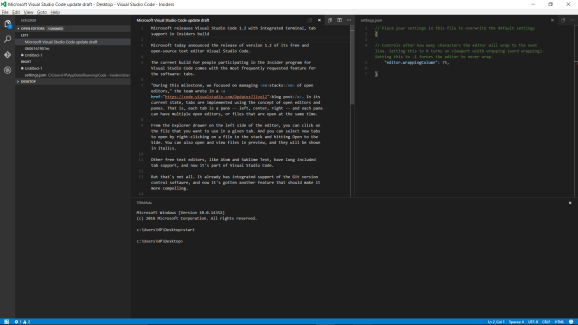 An Insiders build of Visual Studio Code with tabs and an integrated terminal.

The current build for people participating in the Insider program of Visual Studio Code comes with the most-frequently requested feature for the software: tabs.

“During this milestone, we focused on managing stacks of open editors,” the team wrote in a blog post. In its current state, tabs are implemented using the concept of open editors and panes. That is, each tab is a pane — left, center, right — and each pane can have multiple open editors, or files that are open at the same time.

From the Explorer drawer on the left side of the editor, you can click on the file that you want to use in a given tab. And you can select new tabs to open by right-clicking on a file in the stack and hitting Open to the Side. You can also open and view files in Preview, and they will be shown in italics.

Other free text editors, like Atom and Sublime Text, have long included tab support, and now it has come to Visual Studio Code.

But that’s not all. Since Code launched last year, it has offered integrated support of the Git version control software, and now it’s gotten another feature that should make it more compelling.

The Stable version of the text editor includes the second-most-requested feature: a terminal right inside of the text editor. No longer do you need to switch applications in order to get to the command line on your machine (the Terminal on Mac and Linux, the Command Prompt on Windows).

Today’s Stable release also features the ability to work with extensions to the software from the command line. For example, the following commands will work:

As of April, Visual Studio Code had more than 500,000 monthly active users.

Update on July 7: The June 2016 (version 1.3) release of the main edition of Visual Studio Code comes with tab support, Microsoft said in a blog post. Users can disable the feature by setting workbench.editor.showTabs to false in the editor’s Workspace Settings, Microsoft said.