Pokémon Go is ripping its monsters out of your pockets and imagination and placing them someplace you’ll be able to go out, walk to, and find them: outside, in the real world.

Developed by Niantic, Pokémon Go is an AR mobile game that tasks players with exploring real-world locations while finding, capturing, and battling Pokémon. This moves the franchise — which has shipped 275 million video games worldwide and is estimated to bring in $2.1 billion this year as one of the world’s largest brands — into the VR and AR market, which is expected to be its own $120 billion business by 2020, according to tech adviser Digi-Capital.

The Pokémon Go beta is live in Japan, New Zealand, Australia, and the United States ahead of its full launch, and it’s set to launch this year. Last week, I went to Niantic’s office and see a demo of the beta in action, and it walked me through some of Go’s features.

Using the same data sets as Ingress, Pokémon Go is Niantic’s attempt to get people to go to places they want them to visit: monuments, parks, and other local areas of intrigue. It’s a combination of the real world and the digital, and instead of exploring regions like Kanto or Johto from the Pokémon games, trainers will be finding the critters in their own cities and backyards.

“If you said, ‘What’s the core essence of the game?’ it is that trying to mimic what the world would be like if Pokémon really lived in it,” Niantic CEO John Hanke said. “That’s the fundamental mission of the game. They’re out there and you have to discover them and capture them.” 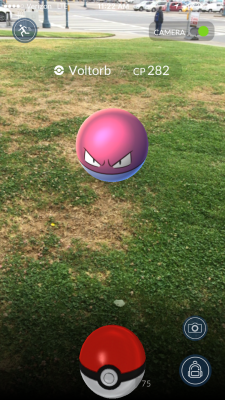 Above: Players will find Pokémon hiding out in real-world locations.

Players have a customizable avatar, which have their own levels: You”ll be doing the levelling up this time, not your Pokémon. Your level goes up as you do tasks like catching Pokémon or battling at gyms. It also has achievements for various things like how long you have walked, how many Pokémon you’ve caught, and even some for different-sized critters. I spied a Big Magikarp achievement, for example. I think that one speaks for itself.

The main interface of Pokémon Go is the map screen, which shows your real-world location (if you’ve ever used Google Maps or any GPS, you’ve already got the basic idea), as well as points of interest across the map. Blue cubes are so-called PokéStops, where players can go to collect items, Pokémon show up on the map as icons of each Pokémon, and gyms show up initially as white icons, and then change based on which team is in control. But the key is that in order to catch Pokémon or collect items from Pokéstops, players will actually have to walk close to those locations on the map.

“To me … the heart of the game is integrating that sort of discovery and fun of the video game with the fun of being outside and exploring new places,” Hanke said. “I just think that’s a great combo and I hope players are into it.”

To prevent people from walking around looking at their screens, Pokémon Go will vibrate when you get close to a location of interest — only when the app is open and on-screen — and it also has a low-power screen mode if you turn your phone upside down while walking to help conserve battery life.

Even though my demo took place in San Francisco — a city with no shortage of landmarks, public places, or interesting things to do — Pokémon Go will still work and have places for people to visit even if you aren’t living in a major metropolitan city. Pokémon Go, much like Ingress, is made to work in big cities as well as small towns. And like Ingress, Pokémon Go will work globally, too.

Though playable anywhere, Pokémon Go will draw from the geology of where you are located. You’ll find more water Pokémon if you are walking around closer to water, and these might be rarer in areas that aren’t adjacent to a lake, river, or a bay. It won’t be impossible find certain types if you aren’t located close to certain types of terrain; they’ll be just be harder to find.

Catching Pokémon seems easy. I flicked the screen to throw a Pokéball and captured a Squirtle on my first try, and I even got some bonus points for throwing a curve ball, accidentally. Of course, just like the games you’ve been playing for 20 years, different Pokemon have different capture rates. Some even draw further inspiration from the previously established video game world: Abra still teleports away. Sneaky little Abra.

And while some things are similar to the mainline Pokémon games, Go has a lot that’s different, too. A critter’s evolution is one of these. If you capture the same Pokémon multiple times — a Rattata, for example — you’ll unlock evolution shards for that creature. Collect enough shards and you can use them evolve that creature.