Go also has Pokémon eggs, and just like the video game equivalents, you’ll need to walk around to hatch eggs…except this time the walking is real shoe-leather express steps. Once placed in an incubator, eggs get progress bars, which will show you how far you have to walk to hatch them. The further you have to walk — with the app open and in the foreground — the rarer the Pokémon that will burst forth will be. You start with one incubator, but can purchase additional ones as in-app transactions. 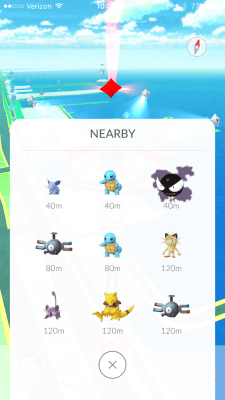 Above: Niantic isn’t saying exactly how many Pokémon players will be able to catch.

As any Pokémon trainer will know, capturing is only a part of the collecting puzzle. What about trading? That’s something I was told is coming, but it won’t be available at launch.

That number of Pokémon is also not fixed: it launches with a set, with plans to add more down the line.

Niantic wanted to bring three elements of Ingress to Pokémon Go: discovery, reflected in the PokéStops and Gyms based on interesting real-world location; exercise, seen in areas like hatching eggs and having to walk around outside; and social.

“People are hungry to get out from behind their screens and have those kinds of face-to-face interactions,” Hanke said.

The social aspect is the gym battles: Pokémon Gyms. In the mainline series, these are where players go to battle gym leaders and earn badges to ultimately face the toughest trainers in each region. In Go, they operate a bit differently. These preset, real-world locations are areas where teams can battle over control, similar to Portals in Ingress. Three teams can battle to control gyms, which have their own levels and prestige rankings. The higher level a gym, the more monsters trainers can leave behind to protect it, but you have to be physically at a gym in the real world both to add Pokémon to it and battle. The team that is in control of a gym can also train Pokémon — even while an take-over attempt is in progress — to make it more difficult for the gym to be taken over by the opposing team. 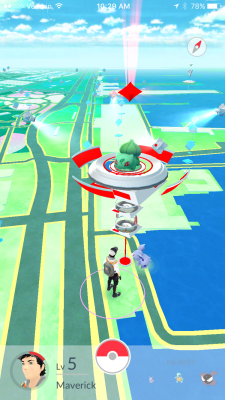 Above: Players can find and battle over control of various Pokémon gyms .

The battles are in real time — no turn-based sessions like the video game series — and allow for many people are once to try to take down and capture a gym for their team. Niantic is still working on figuring the upper limit of how many people can take place in these battles at once, but it mentioned dozens.

Attacking has three mechanics: tapping the screen for a light attack, swiping to dodge, and a long press to use a more powerful attack. Each Pokemon is controlled the same way, but the moves they will be using are different.

The basic elements of gyms will be in Pokémon Go come launch, but the team is working on other ideas for the gym and team battles. I also asked if Pokémon Go would have functionality with the 3DS games, like the upcoming Pokemon Sun and Moon:

“Nothing at launch,” Hanke said. “Cool concept, though.”

I also saw Go’s camera feature. Similar to Miitomo, this lets players take pictures of locations, but with AR Pokémon included with the photo. Hanke showed me pictures he had recently taken with his family at Mt. Diablo, with Pokémon integrated in the shots. Much like how the picture-taking aspect of Miitomo was somewhat of a surprise success (at least initially), I can see the photo-taking crowd having a lot of fun putting Pokémon in all of their pictures.

Pokémon Go will also make use of the Pokémon Go Plus device, a wearable that Nintendo designed and manufactured.

The Bluetooth device has a tri-colored LED that doubles as a button and a vibration motor. It pairs with your phone, and it enables you to play Pokémon Go without staring at your phone the entire time. The device alerts players when they are near PokéStops or wild Pokémon, and you will be able to claim items from PokéStops and capture Pokémon all directly through the device by pressing the button “in a certain way and a certain pattern.” Information is encoded in the pattern of vibrations and colors on the device, and as players get to know the device they will be able to figure out what the device is communicating.

The Pokemon Go Plus also can be used to get alerts from the game even when the app is running in your phone’s background. The app itself, without the device, can only issue alerts when its open in the foreground.

“It’s a supplement to playing through the game,” Hanke said, “so it doesn’t replace that completely.”

The Pokémon Go Plus will launch “more or less” around the same time as Pokémon Go, with a still-unannounced price.

Pokémon Go is free-to-play, with microtransactions. Niantic said it’s still figuring out the pricing, but it noted that you’ll only be able to buy basic Pokéballs — the better Pokéballs are only at PokéStops in-game — which means that you won’t be able to simply pay more to get better balls. You will be able to pay to expand your backpack and the number of items you can hold, as well as the carrying capacity for your Pokémon. The store will have other items, too, like incense that lets you attract Pokémon to your current location and additional egg incubators (you start the game with one) as well.

“We tried not to be paid-to-win,” Hanke said. “We’re trying to provide things that are helpful, save time, just basically make it more efficient, perhaps, to play. They aren’t like shortcuts to ultimate global domination. We try to reserve that for hard work and skill.”

And as for a release date, Niantic won’t say when Pokémon Go will fully launch.

“All I can say today is when it’s ready,” Hanke said. “I think we’re getting closer, obviously as we roll out of the beta you can sense some tempo there. But we haven’t nailed the final date yet.”

To be the very best …

From what I’ve seen so far, I’m excited for Pokémon Go, but I have a few reservations Not being able to directly battle other players, unless you are at gyms seems like an odd detraction from the tenants of the series, especially even the gym battles are the direct person-to-person battles players are used to. I’m also concerned about the simplicity of the fights and attacks, and how they will live up to some players expectations, or the fun and depth of the battles of the mainline series. I understand the desire to have players get up and go to gyms, but I would like a way that a friend and I could throw down if we were just sitting at home.

Pokémon Go is also missing one of the cores of the series — trading. And I’m also curious if the low-power mode inclusion is because the game will have battery drain problems, and also wish that some of the alert and step-counting functionality could work while the app is in the background, even without the Pokémon Go Plus.

But mostly, I need more time with it — and actually playing — to get a stronger feel for the overall experience. GamesBeat will have more coverage of the beta and release versions of Pokémon Go as it gets closer to launch.