Ubisoft is betting that its first foray into movies, Assassin’s Creed, will be a big hit when it debuts this winter.

Assassin’s Creed debuts on Dec. 21, and the French game publisher hopes the new movie will get a huge benefit from the fans of the video game franchise, which has sold more than 96 million units to date.

Stephanie Simard, vice president of global marketing at Ubisoft Motion Pictures, said in a press event that the company’s trailer for the movies has already gotten more than 175 million views in just a month.

“The film will stand on its own. You don’t need pre-existing knowledge of Assassin’s Creed to enjoy it, but we want to take our fans with us on the ride every step of the way,” Simard said. “They’ve been dedicated for the last decade and we want them on the inside. Fan engagement is a part of our DNA.”

So Ubisoft is taking some fans on a tour of 20th Century Fox as part of that effort.

On stage, producer Frank Marshall said that he is always looking for a great story for a movie, and the Assassin’s Creed universe has a rich foundation for storytelling.

Ubisoft created its movie division in 2011. Simard said that Hollywood’s love affair with games is happening again because games have changed and become a great foundation for epic storytelling. Ubisoft wants to focus on quality and consistency, Simard said.

Assassin’s Creed will have a combination of unique mythology, historical intrigue, the theme of free will versus control, secret societies, and genetic memories.

The movie stars Academy Award nominee Michael Fassbender, and its director is Justin Kurzel, who previously helmed Macbeth with Fassbinder.  Andy Nicholson of Gravity and Divergent fame is production designer.

“Michael Fassbender was our first and only choice to play the hero,” Simard said. 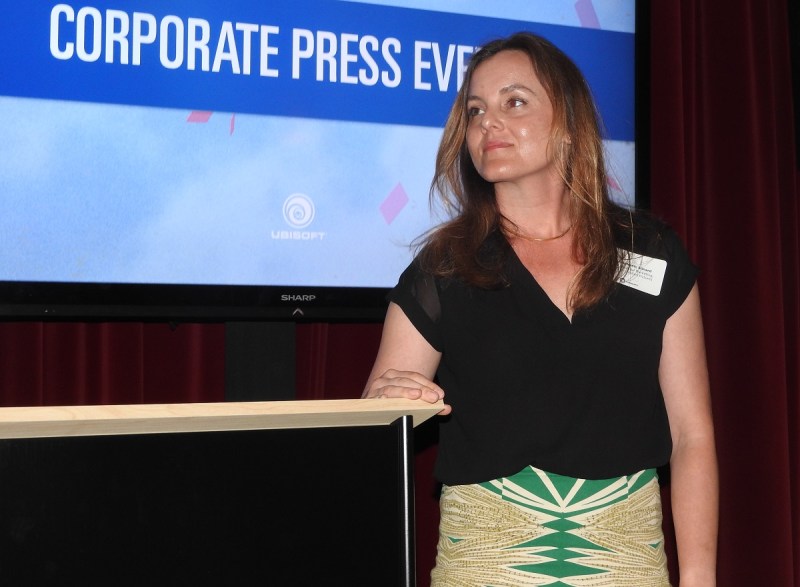 Above: Stephanie Simard is vice president of global marketing at Ubisoft’s movie division.

The film’s costume designer is Sammy Sheldon, who worked on Ex Machina and Ant-Man. Ben Cooke is in the important role of stunt coordinator, and Damien Walters, a freerunner and former gymnast, is the stunt performer. Walters jumped off a120-feet building for one of the stunts in the trailer — with no net.

Ubisoft is also making a Rabbids TV show, a Tom Clancy’s Splinter Cell movie with Tom Hardy, a Watch Dogs movie with Sony, a Ghost Recon movie with Warner Bros., and a film version of Tom Clancy’s The Division.

Ubisoft previously had its Prince of Persia franchise turned into a 2010 film, Prince of Persia: Sands of Time, (distributed by Disney’s Buena Vista division). It had a mixed reception, but ultimately generated $336 million worldwide.

“You will have the same wish fulfullment in the movie as you do in the game,” Marshall said.