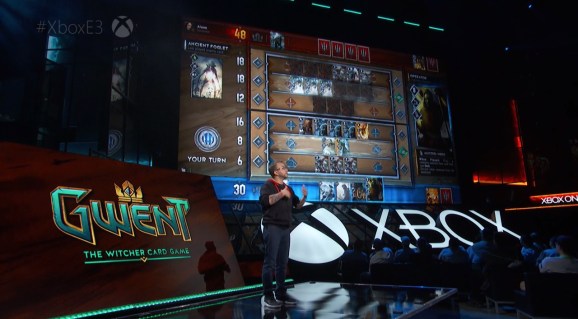 If you loved Gwent, you weren’t alone. It was such a success that it’s now its own game.

CD Projekt Red announced today during Microsoft’s Electronic Entertainment Expo show that Gwent: The Witcher Card Game is becoming a standalone title. It will have a single-player campaign and feature cross-play between consoles and PC, adding another competitor to the $1.2 billion card-game market — one that Hearthstone: Heroes of Warcraft dominates for Blizzard Entertainment.

“The game is played over a best-of-three series of rounds, as players unleash their hand by slinging spells and diverse units with special abilities and use clever tricks to deceive their opponents,” CD Projekt Red noted in a press release sent to GamesBeat.

Gwent is an optional side-experience in The Witcher III: Wild Hunt, a popular, open-world role-playing game that came out last year for PlayStation 4, Xbox One, and PC. The closed beta will start this September on Xbox One and PC.