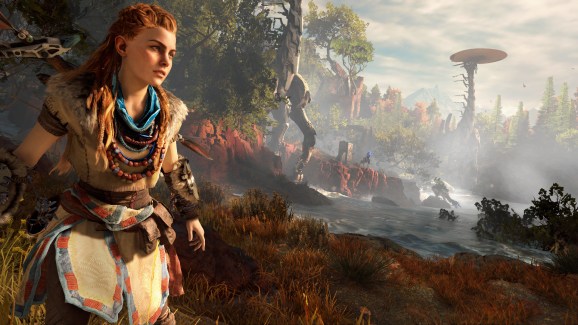 Sony gave PlayStation 4 fans a new look at the action game Horizon: Zero Down during its event ahead of the Electronic Entertainment Expo this evening in Los Angeles.

Horizon was first shown during Sony’s E3 event last year. It’s from Guerrilla Games, the studio behind the Killzone series of first-person shooters. This is the company’s first new property since Killzone first launched in 2004. Horizon will come out on February 28, 2017. It is set during an overgrown future filled with robots, while humans have reverted back to scavenger ways.

The new demo shows a woman running through a large, lush enviroment while hunting large, crawling robots for parts. The machines protected themselves with shields while the human, named Aloy, fought them with a high-tech slingshot. She then had to save a man from a corrupted robot. A conversation between the two shows that players will have dialogue options.

Aloy later fights a steer-like robot — before hoping on to ride it. She then disembarks to fight another large robot that jumps around and attacks with a long, scorpion-like tail. At one, point she continues the fight on her mount. When knocked off, she fights back with a weapon that pins the creature to the ground. Eventually, Aloy blasts its exposed core with her bow, kills it, and collect its resources.