Meta has raised a second round of funding of $50 million for its augmented reality headset.

With augmented reality, computer-connected glasses can overlay animations on the real world, giving you much more data about what you see in your surroundings. You could, for instance, look at a mountain and see how tall it is, or how much a particular piece of clothing costs.

Redwood City, California-based Meta is one of many chasing the augmented reality glasses market. But as big as the round is, it pales in comparison to the $793.5 million raised in February by Magic Leap, an AR startup in Florida. Tech advisor Digi-Capital expects augmented reality to be a $90 billion market by 2020.

But Meta has shown some very promising demos of its AR technology, which includes glasses as well as hand-gesture technology. Back in February, Meta unveiled its Meta 2 headset. 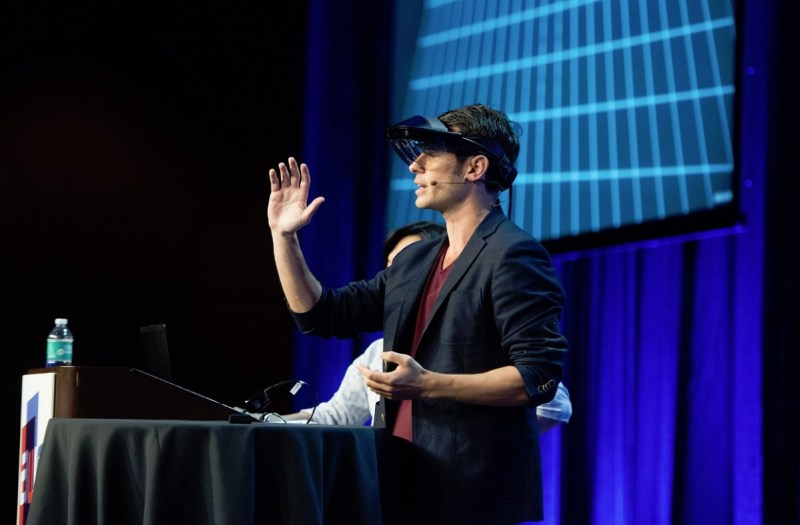 Above: Meron Gribetz demonstrations gesture detection with the Meta 2 glasses.

Meron Gribetz, the CEO of Meta, said in a statement, “It is incredibly gratifying to have the support of big thinkers and investors who understand the importance of creating a new human-computer interface, anchored in science. Our friends at Tencent, Lenovo, Horizons Ventures, Comcast Ventures, and all the other investors really get what we’re doing and why Meta is different from the other players in AR. They understand that the combination of our advanced optical engines, along with our neuroscience-based interface design approach, are what will create a computing experience that is 100 times easier to use and more powerful than traditional form factors.”

Meta plans to use funds raised to continue building upon its hardware and software technology base, business expansion, and app development and developing the next generation of its technology, Meta 3.

“In our view, Meta has built a world-class team. Meta is probably the only startup which has the capabilities to compete with giant companies’ projects like Microsoft Hololens and Magic Leap,” said
Bin Yue, a founding partner of Banyan Capital, in a statement.

Meanwhile, Michael Yang, the managing director at Comcast Ventures, said in a statement, “Augmented reality represents a transformational platform for communication, collaboration and how individuals will work in the future. Meta’s platform enables a host of new ways to conduct business across a wide array of industries. We look forward to supporting Meta as our first investment in the AR market.”

And Jier Yuan, the vice president of North America for GQY, said in a statement, “Augmented reality is the next strategic technology for GQY. Through the investment in Meta, GQY is looking to bring the best-in-class augmented reality applications to China. This goal will be achieved by leveraging Meta’s leading-edge AR hardware, software, and GQY’s in-depth knowledge and relationships in industrial training, public transportation, and education sectors in China. Therefore, the strategic partnership with Meta is extremely important for GQY’s success in augmented reality market.”